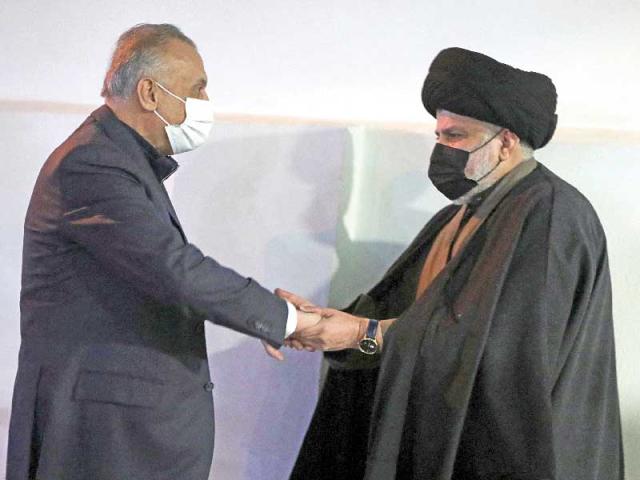 The Saudi newspaper, Asharq Al-Awsat, described, on Tuesday, that the leader of the Sadrist movement, Muqtada al-Sadr, nominated his cousin Jaafar al-Sadr to head the next government as a political maneuver, indicating that al-Sadr is trying to pass Mustafa al-Kazemi at a time when Qassem al-Araji and Haider al-Abadi were nominated by The coordinating framework. The newspaper stated in a report: “The forces of the coordinating framework tried to respond to al-Sadr with more than one formula; Including that he did not announce publicly after his adoption of Jaafar al-Sadr as the only candidate for prime minister. The first of which was her unofficial declaration, most notably Haider al-Abadi, the former prime minister, and Qassem al-Araji, the current national security adviser.” She added that “the problem of the bloc, the largest bloc still exists, and it is the biggest obstacle for both Shiite parties, the Sadrist movement and the coordination framework, while the Sadrists see that they are the “bloc.” The “major bloc” with 75 deputies, the forces of the “coordinating framework” see that it is the “large bloc” after it was able to gather 83 deputies. She pointed out that “the presidency of the parliament has not yet been registered” the “major bloc” that nominates the prime minister after the election of the president of the republic. While a Shiite breakthrough appeared after al-Sadr’s contact with al-Maliki rejoiced the Kurds and Sunnis in terms of passing their candidate easily in the next session after a section of the “framework” forces joined them, the re-pitching of the candidates for the position of prime minister and how to determine the “big bloc” made everyone return to the first square of understandings. She explained, “At a time when the Sadrists are silent about what appeared to the public opinion that Jaafar al-Sadr is their candidate, with the possibility of putting up another candidate; The forces of the “coordinating framework” began to hint at the names of their most prominent candidates, al-Abadi and al-Araji, and there are indications that some agencies and parties have begun to circulate stating that Jaafar al-Sadr has apologized for taking over the position, noting that “the silence of the Sadrists so far seems suspicious, with indications that the story of Jaafar’s candidacy Al-Sadr by Muqtada Al-Sadr is just a maneuver, and that Al-Sadr’s real candidate is the current Prime Minister Mustafa Al-Kazemi, who, even if he wrote a farewell tweet on “Twitter”, it seemed to many a maneuver as well.”