Al-Sadr for “Breaking Beasts”: I am not the one who threatens death

Al-Sadr for “Breaking Beasts”: I am not the one who threatens death 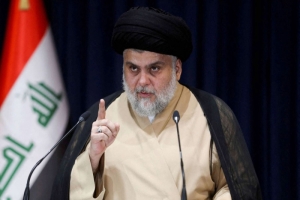 Baghdad – The leader of the Sadrist movement, Muqtada al-Sadr, stressed Friday his adherence to the government of the national majority, saying that he will not return Iraq to the corrupt and will not sell it to those behind the borders.

Al-Sadr said in a tweet, “I am not the one who threatens death.. and what frightens those who imitate (following his path) the Prophet of Muslims, Muhammad.” He added, “Once again, the voices of the slaying monsters (without naming them) are rising, which are only aware of the threat.”

Al-Sadr, whose list topped the last parliamentary elections (with 73 seats out of 329), entered a tripartite alliance to form the next government, after negotiations with the coordination framework failed.

Al-Sadr had made an offer to the Al-Fateh coalition, which is part of the coordination framework, to participate in the government of the national majority, provided that the State of Law coalition was excluded, but the coalition, which includes militias loyal to Iran, rejected the offer and insisted on the participation of all representatives of the framework.

The Iraqi street fears that the forces of the coordination framework will escalate the security situation in an effort to confuse the cards, especially since al-Sadr’s statements indicate that the forces allied with him are exposed to serious threats.

The political offices of the Sunni and Kurdish forces and parties allied with al-Sadr were attacked by unknown persons with explosive devices in Baghdad, Anbar (west) and Kirkuk (north) a few weeks ago.