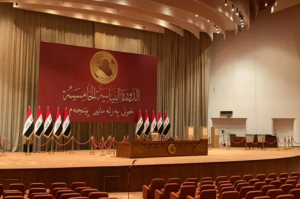 The Iraqi parliament failed to hold its scheduled session this afternoon to vote to choose a president for the republic due to the lack of a quorum as a result of the boycott of many prominent political blocs.

A number of deputies took the constitutional oath, before the parliament’s presidency announced the transformation of today’s session into a deliberative due to the lack of a quorum to convene, that is, the presence of 165 deputies (half + 1), while the election of the country’s president requires two-thirds of the total number of deputies in Parliament of 329; That is 220 deputies.

The court’s decision stated that the procedures for Zebari’s candidacy had been suspended until he resolved a lawsuit filed by 4 deputies “against the legitimacy of his candidacy for the position of President of the Republic.”

Iraqi Foreign Minister Hoshyar Zebarizibari
, the Kurdistan Democratic Party’s candidate for the presidency and the most prominent contender for the position (Al-Jazeera)

In 2018, an Iraqi court issued a request for Zebari to appear before it against the backdrop of his dismissal by Parliament in 2016 on charges related to administrative and financial corruption during his tenure as Foreign Minister.

In a related context, Al-Jazeera correspondent quoted sources from within the Federal Court that it is currently considering another lawsuit challenging the legality and constitutionality of the candidacy of Zebari and his rival, the current president, Barham Salih, the candidate of the Patriotic Union of Kurdistan for the post of president.

The reporter said that this lawsuit presented evidence of the participation of both Zebari and Saleh in the secession referendum that was held in the Kurdistan region of Iraq in 2017, which proves – according to the lawsuit submitted – that the candidates violated Article 67 of the Iraqi constitution, which requires that the President of the Republic maintain unity Iraq.

Last Friday, the leader of the Sadrist bloc, Muqtada al-Sadr, called on his political alliance in Parliament not to vote for Zebari, if he did not meet the conditions.

Al-Sadr said – in a tweet to him on Twitter – that if the ally Kurdistan Democratic Party’s candidate for the presidency of the republic does not meet the conditions, I call on the Islah representatives (the Sadrist bloc) not to vote for him. “We are advocates of reform, not advocates of authority and rule,” he added. Without specifying the conditions that must be met by the candidate for the presidency.

According to the political custom that has been followed since the first parliamentary elections held in the country in 2005, the position of the President of the Republic belongs to the Kurdish component, the presidency of parliament is for the Sunnis, and the leadership of the government belongs to the Shiites. And the presidency is mostly from the share of the Patriotic Union of Kurdistan, as the late Jalal Talabani assumed it over two terms, then Fuad Masum, then the current president.

The Sadrist bloc topped the elections held on the tenth of last October, with 73 seats, followed by the “Progress” coalition led by Muhammad al-Halbousi with 37, the “State of Law” coalition led by Nuri al-Maliki with 33, and then the “Kurdistan Democratic Party” led by Massoud Barzani with 31.