Continuing disagreements between the “Iraqi houses” over the three presidencies

Continuing disagreements between the “Iraqi houses” over the three presidencies 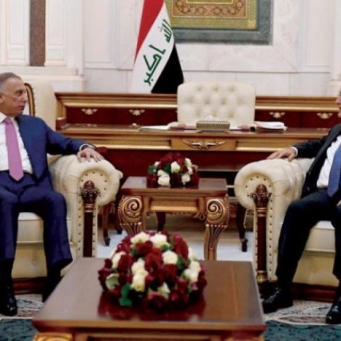 The Iraqi President, Barham Salih, set yesterday, the ninth of next month, the date for the first session of the new parliament, amid sharp differences between the political forces (Shiite, Sunni and Kurdish) regarding the formation of the future government, as well as renewal or change in the three presidencies, so that these differences are expected to dominate the session. The opening, which leads to its postponement.
President Saleh said in his post on the social networking site “Twitter”: “I signed the republican decree to call the new House of Representatives to convene on Sunday, January 9, 2022, and hopes are set to meet the national merit by forming a capable and effective government that protects the interests of the country and enhances sovereignty, protecting And a servant to the Iraqis… This requires solidarity in order to achieve the required reform.” Thus, the constitutional timing for the formation of the next government, starting with the resolution of the two presidencies of Parliament and the Republic, began, at a time when sharp differences between the political components over whether or not to renew the three presidencies (the Republic: Barham Salih, Ministers: Mustafa Al-Kazemi, and Parliament: Muhammad Al-Halbousi) .
Although the first session is held under the chairmanship of the eldest member, former Parliament Speaker Mahmoud al-Mashhadani (born in 1948), according to expectations, it will not witness the election of the new Speaker of Parliament due to the continuing differences between the “Progress” coalition headed by the former Parliament Speaker, who aspires to renew his term, Muhammad Al-Halbousi, and “Al-Azm” led by Khamis Al-Khanjar, who is witnessing sharp division, regarding what was said about the existence of an undeclared agreement between Al-Halbousi and Al-Khanjar for the former to assume the presidency of Parliament for a second term in exchange for Al-Khanjar, a businessman, assuming the position of one of the three Vice Presidents of the Republic. The dispute revolves around the fact that a number of Al-Azm MPs did not accept the renewal of Al-Halbousi and put forward three candidates for the presidency of Parliament: Mahmoud Al-Mashhadani, Khaled Al-Obeidi (former defense minister) and Thabet Al-Absi.
While the possibility of resolving the dispute between the two parties does not appear on the horizon during the remaining period of the first session, the indications are that the session will be postponed until further notice, according to what happened in previous sessions, although the Iraqi constitution does not approve of keeping the session open.
In addition to the entitlement to elect the speaker of parliament (Sunni) and his two deputies (Shiite and Kurdish), the first session will witness the announcement of the largest parliamentary bloc, which will nominate the next prime minister. The dispute is still raging between the “Sadr bloc” led by Muqtada al-Sadr, and the “coordinating framework forces”, which include the losing forces in the recent parliamentary elections, over who constitutes the largest bloc. While al-Sadr insists that his bloc winning the most seats (75) is the largest, the “framework” forces insist that they are the ones who will announce the formation of the largest bloc during the first session, according to a constitutional text indicating that the largest bloc is either the list winning the most seats or the bloc that wins the most seats. It consists of a number of coalitions within Parliament in the first session.
And while the dispute still exists among the Sunnis, through “progress” and “determination” over the presidency of the parliament, the Shiite house is still suffering from sharp differences, whether about the largest bloc or the mechanism of government formation (is it a national majority as Al-Sadr calls for? Or a consensual government, as The forces of the “coordinating framework” call for it?) and about the names of candidates to head the next government. Although the chances of the current Prime Minister, Mustafa Al-Kazemi, are still high, supported by the leader of the Sadrist movement, Muqtada Al-Sadr, some forces of the “framework” are still placing a “veto” on his survival.
The Kurdish House is also no different from the Sunni and Shiite houses, regarding the position of the President of the Republic, which is part of the Kurdish component and is currently occupied by Barham Salih, who aspires to renew him for a second term (the Iraqi constitution allows the President of the Republic two presidential terms of four years for each term), while the “party insists The Kurdistan Democratic Party” led by Massoud Barzani is to nominate another figure to take over the position from the Democratic Party or the PUK itself, with the exception of Salih, but the leaders of the Patriotic Union confirm that their only candidate is Saleh himself, which means that the dispute continues within the Kurdish house over the position of the President of the Republic.