Iraq..a delegation of prominent Shiite forces meets Al-Sadr in Najaf to convince him of a consensual government

Iraq..a delegation of prominent Shiite forces meets Al-Sadr in Najaf to convince him of a consensual government 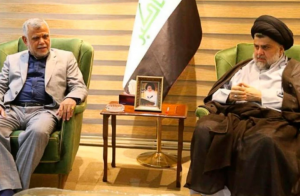 The delegation of the coordination framework of the Iraqi Shiite forces that reject the results of the legislative elections met at the home of the leader of the Sadrist movement Muqtada al-Sadr in the Al-Hanana area in Najaf (south of Baghdad).

The delegation included Hadi al-Amiri, the head of the Al-Fateh Alliance, the Secretary-General of Asa’ib Ahl al-Haq, Qais al-Khazali, and the leader of the National Contract Alliance, Faleh al-Fayyad.

Al-Jazeera correspondent stated that the coordination framework delegation met with al-Sadr, in an attempt to persuade him to form the next government by consensus.

Al-Sadr, who won the most seats in the elections (his movement won 73 seats out of 329 in the Iraqi parliament), has expressed more than once his refusal to form a government by the method of consensus and quotas, and insisted that the next government be by the majority method.

Yesterday, Tuesday, the coordinating framework called on its supporters who are camping at the gates of the Green Zone (central Baghdad) to end their sit-in.

Hisham Al-Rikabi – a leader in the “State of Law” bloc that is affiliated with the coordination framework – called on the sit-in to withdraw, while retaining the right to demonstrate in the coming days.

Al-Rikabi added that the call came after the sit-ins and protesters succeeded in what he called “exposing fraud” that marred the electoral process.

Two days ago, the Federal Court in Iraq ratified the election results, and it is expected that the President of the Republic, Barham Salih, will invite the new Parliament to hold its first session during the next two weeks, which will be devoted to electing the Speaker and his two deputies, then electing a new President of the Republic, before the prime minister who will present His government formation during a period not exceeding a month, according to the Iraqi constitution.

It is noteworthy that in early December, a meeting took place between Al-Sadr and the leaders of the coordination framework at a house in Baghdad Al-Amiri, during which the meeting agreed to continue dialogues and discussions, leading to the development of realistic solutions to the blockage in the political scene.

After the first meeting, al-Sadr announced that the next Iraqi government would be “a national majority government, neither eastern nor western,” while the coordination framework issued a statement making it clear that outstanding issues and the latest developments in the current situation were discussed “to strengthen the bonds of unity and fraternity among the people of the same country, and in a manner that serves the interest of the people.” Iraq, which is a priority for all parties.”

The political forces close to Iran suffered a significant loss in the recent elections compared to the previous one in 2018.

While the Sadrist bloc topped the list, the Progress Alliance won 37 seats, the State of Law coalition won 33 seats, and the Kurdistan Democratic Party won 31 seats.