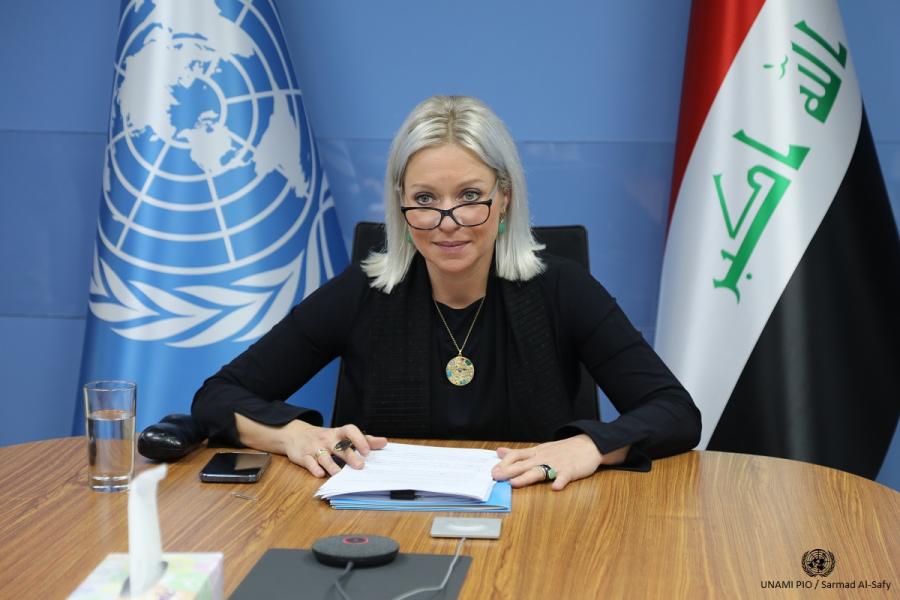 Shafaq News/ On Tuesday, the Special Representative of the Secretary-General of the United Nations in Iraq, Jenin Hennis-Plasschaert, gave a briefing to the UN Security Council.

Shafak News Agency publishes the text of the briefing below:

As much as I would have liked to be with you in the Council Chamber today, however, having just passed the elections on the 10th of October, we thought it would be more effective to address you from Baghdad. Needless to say, I really look forward to meeting you in person early next year.

Given the importance of the recent parliamentary elections, as well as the political and security developments since they were held, the focus of my briefing today will be mainly on the situation of the elections and their aftermath.

At the outset, I would really like to make an emphatically positive note: the last legislative elections were the fifth to be held under the Iraqi constitution of 2005, and they had a lot for Iraqis to be proud of.

As we have already mentioned: the assessment of the elections was that they were generally calm and well-managed, and showed clear technical and procedural improvement, and in general represented a great achievement that the Iraqi authorities and parties could publicly acknowledge.

Also, I do not exaggerate in saying that those elections were achieved with difficulty, and let us remember that the October elections emerged from an unprecedented wave of demonstrations that swept across the country in 2019. Demonstrations were marred by violence, excessive use of force, kidnappings, and cases of targeted killings. Demonstrations resulted in hundreds of dead and thousands wounded.

Mr. President, we cannot deny that the elections and their outcomes can provoke strong feelings, and this applies to any democratic system around the world, and Iraq is no exception to that. Depending on people’s attitudes, these feelings can escalate.

Often, these intense feelings provoke an intense discussion about things like: the direction the country should take. There is absolutely no harm in that, as such discussions are the cornerstone of pluralism and indicate political participation.

However, if these feelings and debates give way to undemocratic motives—disinformation, baseless accusations, intimidation, threats of violence, or worse—then sooner or later, the space will be opened to practices that are simply intolerable.

Mr. President, on the seventeenth of October, the parties rejecting the election results began to demonstrate and sit-in, and those demonstrations and sit-ins escalated on the fifth of November, and casualties were reported in Baghdad.

In the early hours of the morning of the seventh of November, an assassination attempt took place against the Prime Minister, which amounted to a direct attack on the state, and a heinous act that can only be condemned in the strongest terms.

Let me be clear: Under no circumstances should terrorism, violence and/or other illegal acts be allowed to derail the democratic process in Iraq.

In order to reduce tensions, calm, restraint and dialogue are the only way forward.

The truth is that citizens of democracies often have to realize that even if the results are not what they had hoped for, the process as it is may be in order. Indeed, one of the clearest signs of democratic consolidation when it comes to outcomes is the ability of parties and voters to recognize outcomes, regardless of their individual preferences.

In the case of Iraq, the total votes at the national level do not necessarily represent the number of seats that some parties might have expected. How is that? Well, for example, having too many candidates in one electoral district may lead to a scattering of votes.

It is interesting in the case of Iraq that the performance of the female candidates seemed to be very successful, and thus the (quota) for women was taken advantage of, which is 25 percent and is likely to have been exceeded, and this percentage represents the minimum (for women’s representation) and not the highest ceiling.

What I would say is: While it may be difficult to accept seat losses, it is important – for any party in any democracy – to study and learn from the causes of loss for the sake of future elections.

For any other matters, including accusations of manipulation of results, the existing legal channels remain available; These channels were used extensively in the case of Iraq. But so far, and as stated by the Iraqi judiciary, there is no evidence of systematic fraud.

This is not without risk, as mistrust often leads to escalation.

Therefore, it is our constant calls for political dialogue to prevail and, once again, any electoral concerns that remain to be addressed exclusively through existing legal channels and in accordance with the law, there is no sense in using others as scapegoats for electoral grievances.

What is the status quo as we speak to you now?

The results will not be final until endorsed by the Federal Supreme Court, and this will be done once the Electoral Tribunal has decided on the appeals submitted to it.

While it is desirable that final results be ratified sooner rather than later, it is worth noting that there is no specific time limit in the Constitution for the ratification of the results by the Federal Supreme Court.

From this standpoint, let me stress that: Any illegal attempts aimed at prolonging or discrediting the process of announcing the election results, or worse: changing the election results through intimidation and pressure, (for example) will only lead to counterproductive results. . I call on all parties concerned not to enter this slip.

Mr. President, in the midst of this post-election turmoil, it is clear that Iraq cannot afford to overlook its national interests.

As I said before: elections are not an end, but a means.

While the risk of a continuing political stalemate is real, Iraq is in dire need of a government capable of dealing quickly and effectively with a long list of unaccomplished domestic tasks, and this is the primary responsibility of all political parties involved.

In other words: it is important that the current situation does not continue as it is. Sophistication, leadership and good judgment are all required, as is a broad commitment to political dialogue with factual information as the basis for discussions and decision-making.

Obviously, time is of the essence. As I mentioned in August, it is time for Iraq to emerge from its prolonged political stalemate and establish dynamic and responsive governance mechanisms.

In fact, the current phase of the post-election period is the appropriate time when all the political actors demonstrate their determination to serve all Iraqis.

Once again, I cannot fail to point out the events that originally led to the holding of the October elections. The lack of political, economic and social opportunities prompted a large number of Iraqis to go out in demonstrations. Their demands and grievances remain as important as ever. As we all know, simmering anger easily builds up.

Frankly, the current scene of Iraq is fraught with dangers, to say the least. In the absence of real reforms, the situation will not improve. On the contrary.

Mr. President, some final notes on the issue of missing Kuwaitis and nationals of other countries and missing Kuwaiti property including the national archives:

This progress would not have been possible without the concerted and tireless efforts made in the past two years and the combination of two components, witness information and satellite imagery.

Here, I would like to stress the importance of the Iraqi government seizing the opportunity of this momentum and using these elements to locate the remains of more than 300 missing Kuwaitis and other nationals of other countries. I am confident that the firm commitment of all relevant parties can expedite the resolution of this humanitarian file.

I am also pleased to inform you that after significant delays due to the COVID-19 pandemic, on 18 November, UNAMI successfully completed the training of 20 Iraqi Ministry of Defense staff in the use of GPR, which can further contribute to locating remains humankind, as well as witness information and satellite imagery.

In conclusion, let me reiterate that the October elections were marred by difficulties, but the important thing is that they were technically well managed. It is a process that the Independent High Electoral Commission and others deserve appreciation for.

Indeed, the recent parliamentary elections could be an important stepping stone on a longer path toward restoring the people’s trust.

While we await the approval of the results by the Federal Supreme Court, I can only assure that what will happen in the coming days and weeks will be of greater importance in the near future of Iraq.

The importance of a sound and inclusive process of government formation cannot be overstated.