Mustafa Al-Kazemi is the man of the critical moment

Mustafa Al-Kazemi is the man of the critical moment 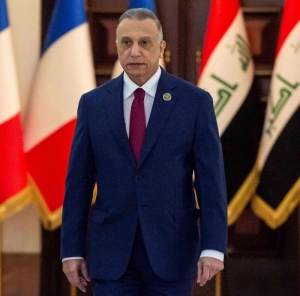 Mustafa Al-Kazemi is the de facto president of Iraq. He is the head of his government and he is the commander in chief of his forces. And when he is subjected to an assassination attempt, that brings us back to the series of murders in Iraq. Abd al-Karim Qassem, Abd al-Salam Muhammad Arif, Saddam Hussein, and before them the descendant of the royal family, Faisal II.

The failed assassination attempt put Al-Kazemi on a ladder that the former journalist could not dream of. But this man is more dangerous than many expected of the Iranian project, whose guards in Iraq are worried about the possibility of its rapid collapse. For a politician to be subjected to an assassination attempt, this indicates his position, which could pose a danger.

What did Al-Kazemi do to deserve such punishment?

From the first day of his assumption of power, it became clear that Al-Kazemi was not on good terms with the militias, and the leaders of those militias drank poison when they had to agree to assign the position of the chief of the executive authority to a person who they believe with absolute certainty represents the United States’ view of Iraq.

What Al-Kazemi did after that, he confirmed that if he could not harm the popular crowd, he would pursue it with scandals that would drag it into areas of the reckless reaction that he put in the face of the state as a representative of the non-state forces.

Al-Kazemi is the head of a temporary authority. But he may be prime minister in the next four years. This is because he is the only candidate accepted by the winning political blocs in the face of the losing political blocs

The Popular Mobilization had defeated Al-Kazemi in an unsuccessful manner when his militia managed to break the prestige of the state and release the detainees from its faction leaders, whom the state had previously charged with murder and kidnapping. However, the cost of that victory was high. Instead of the Popular Mobilization being a support in the fight against terrorism, its anti-state and anti-law demonstrations showed it as a terrorist organization that works to protect killers, destroy civil peace, weaken the state, blackmail society, and subjugate both.

Al-Kazemi has silently and quietly exposed the lie of the Popular Mobilization’s affiliation with the armed forces and its submission to the orders of the Commander in Chief of the Armed Forces. As it became known, the Hashd is in fact an Iranian occupying force, and Qaani, who is Soleimani’s heir in office, is the one who issues orders to the Hashd, not the Iraqi prime minister.

After the failed assassination attempt, the crowd announced that its war on the Iraqi state and Iraqi society would take a new turn based on killing without a mask. The protesting activists are no longer his goal alone, but the goal will be all politicians who can be reached who want to liberate Iraq, even partially, from Iranian dependence.

The Hashdites consider Al-Kazemi to be responsible for their defeat in the recent elections. This opinion may be correct. Through his failed battles with them, he was able to drag them to the position of admitting that they had nothing to do with the Iraqi national project and that they hated the state and were working to bring it down in implementation of their political reference in Tehran.

That is why Ras Al-Kazemi was the one wanted in the speech of one of the faction leaders, Qais Al-Khazali, whom the Prime Minister can file a lawsuit against on charges of inciting his murder. Khazali threatened to retaliate against Al-Kazemi, and then the drones flew in the direction of the prime minister’s house, who knew that the estrangement between him and the militias had reached the season of hell, which portends all kinds of evil.

As Iran thinks through Qaani that bridging the rift is possible by appeasing the popular crowd with a consensual authority based on a partial cancellation of the election results and giving it a chance he lost, Al-Kazemi found in the failed assassination attempt an occasion to invoke the law that does not enjoy any kind of respect for the crowd before. In this, Al-Kazemi insists on being a statesman.

The failed assassination attempt put Al-Kazemi on a ladder that the former journalist could not dream of. But that man is more dangerous than many expected of the Iranian project

It was a failed coup attempt. A failed recipe for a coup that could lead to a clash between Iran and the United States. Is Iran not embarrassed in the face of the exposure of the fact that it intends to overthrow the shabby Iraqi state? Is it not absurd that the mullahs’ state fears the establishment of a state in Iraq whose people are still groaning under the turbans?

Al-Kazemi is the head of a temporary authority. But he may be prime minister in the next four years. This is because he is the only candidate accepted by the winning political blocs in the face of the losing political blocs that are hostile to him and that do not have what would qualify them to replace him by peaceful means.

The failed assassination attempt may have put Al-Kazemi in the position that makes him a future bet for a clean Iraq of militias. One day the man will be a hero of an unexpected kind.