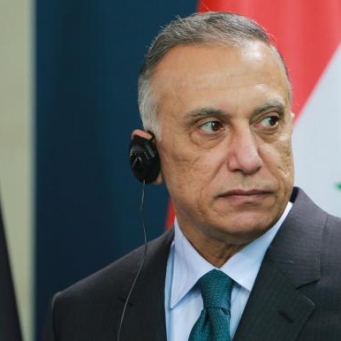 It does not need to wait for the results of the investigation committee to guess the parties behind the attempt to assassinate the Iraqi Prime Minister, Mustafa Al-Kazemi, at dawn last Sunday. And she threatened to target him more than once, and did not hide, even as she tried to deny the accusation of orchestrating an attempt to kill him, that she wanted to get rid of him. Al-Kazemi, despite his reliance on fragile political consensus, and his lack of a parliamentary support base of his own, remains a threat to the project of the “Popular Mobilization” factions, which aims to establish a state that represents Iran in its system of government, and seeks to annex Iraq to it, and the Wilayat al-Faqih, which runs it. The results of the early parliamentary elections, which were supervised by the Al-Kazemi government, gave more reasons to get rid of the man, whether by preventing him from returning to head the government, or even physically liquidating him. Despite all the pressure it exerted, including the use of the street, the pressures of Iran’s allies did not succeed in intimidating the Electoral Commission and prompting it to change the results, after a recount of thousands of electoral boxes. The last attempt in this context came last Friday, when it seemed that there was an effort to drag the government into a street confrontation that would reshuffle the cards politically, and give a justification for the factions to use force against the state.

It is not possible to look at the abuses carried out by the militias, as they did recently in the village of Nahr al-Imam, where they carried out a massacre of its people, in response to a massacre carried out by ISIS in the neighboring village of al-Rashad, or targeting activists who reject Iranian interventions during the protests in the central and southern cities, or to prevent The security services from carrying out their duties in imposing order, can only be viewed from the angle of the systematic and intentional targeting of the Iraqi state, and working according to a foreign agenda whose main purpose is to keep Iraq weak, torn, run by a fictitious government, whose mission is to provide cover for militias that have actual authority on the ground, and take their orders from beyond the borders.

Al-Kazemi bears a large part of the responsibility for what happened this week, and for the security situation in general throughout the country. as the first responsible for it. Al-Kazemi’s handling of the attempt to assassinate him, until this moment, indicates that he is still reluctant to take decisive steps to restore the state’s prestige and authority, and to stop all abuses against it.

If Al-Kazemi is firm and moves in this direction, there is a possibility that he will turn into an Iraqi national leader, and enter history as the politician who restored Iraq’s sovereignty and independence, eliminated the chaos and corruption of militias, and ended foreign interference in its affairs. Until this happens, Al-Kazemi should stop procrastinating in announcing the election results, which means the end of the current parliament’s mandate, and then move towards dissolving the Popular Mobilization Authority, and invite whoever wants from the militia members, with the exception of their leaders, to join, as individuals, the security services and the army. As for its leaders, they can choose between returning to where they came from and to where they belong (Iran), or staying and being held accountable for the crimes and corruption they committed during the past two decades against Iraq and its people. Thus, all types of weapons, including light weapons, are confined to the hands of the state. This means a new parliament, a new government, a new state, a new Iraq.