Iraq is chasing its smuggled money in five countries

Iraq is chasing its smuggled money in five countries 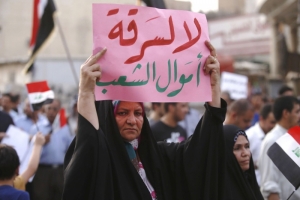 Baghdad – The Iraqi Federal Integrity Commission is heading to conclude memoranda of understanding with five Arab and foreign countries to open up prospects for cooperation and exchange of information on wanted persons and their money, and to organize requests for legal assistance to recover them and smuggled funds.

Since 2003, Iraq has been suffering from widespread corruption in most of its institutions and mismanagement, which has resulted in the loss of huge fortunes on fake projects and money laundering operations.

Moataz Faisal Al-Absi, Director General of the Money Recovery Department of the Iraqi Integrity Commission, said in a statement to the government newspaper Al-Sabah, published on Tuesday, “We are working to recover the smuggled Iraqi funds according to criteria that will be established to conclude memorandums of understanding, exchange information about wanted persons and their money, and organize requests for legal assistance.”

He stated that the Integrity Commission is in the process of concluding a number of memoranda of understanding with Jordan, Lebanon, Kuwait, Turkey and Poland, and the quest continues to go to other countries to conclude such memoranda to enhance cooperation with them.

He pointed out that the priority in selecting countries is based on belief and knowledge of the possibility of smuggled corruption funds in those countries, as well as a number of files that are supposed to be resolved.

He explained that the recovery files include a set of documents about wanted persons, smuggled funds and a request for international assistance, and are presented to the countries where the accused or the convict is present in order to seize his money.

Last September, Iraq held an international conference to recover looted funds with the participation of the Arab League and Arab justice ministers, and Prime Minister Mustafa Al-Kazemi pledged at the time that he would not back down from recovering his country’s smuggled funds, calling for international cooperation to help him achieve this goal.

The two-day conference came out with a final statement in the form of recommendations divided into 18 points, the most important of which is encouraging the conclusion of bilateral agreements between countries, which helps Iraq recover its money, in addition to the importance of Baghdad issuing guidelines that simplify the money recovery mechanism.

Corruption was a major reason for the failure of successive Iraqi governments to improve basic public services, such as education, electricity, drinking water, the health sector, and others.

The fight against corruption was at the top of the demands of massive protests that Iraq witnessed for a whole year, starting in October 2019, when the government of former Prime Minister Adel Abdul-Mahdi, in partnership with Iraqi militias affiliated with Iran, was involved in the killing of about 700 demonstrators and the injury of about twenty thousand others, in order to protect the regime. Corrupt religious parties in the country.

No real figure is known for the amount of Iraqi money smuggled outside Iraq, as government and popular figures are in conflict about the truth of those funds that drained the country’s wealth.

Iraqi President Barham Salih had previously announced a bill to recover the proceeds of corruption and submitted it to Parliament, and sought to recover about 150 billion dollars that had been smuggled out of Iraq since 2003, which is a preliminary report, while there are much more estimates than that.

The Parliamentary Integrity Committee confirmed that the volume of smuggled funds outside Iraq is estimated at 239.7 billion dollars, a figure that exceeds the country’s budget for more than two years, stressing the existence of political pressures to obstruct the fight against corruption.

The committee stated that the money that was smuggled out of Iraq during the past years through fake receipts, was made through commissions paid to some officials for the purpose of facilitating smuggling operations.

The smuggled and frozen Iraqi funds abroad are still out of reach, despite successive assurances from various government parties that they should be recovered.

To recover these funds, Iraq needs an accurate information base, the use of financial auditing companies and international courts, while strengthening the government’s demand for evidence and concluding bilateral agreements with some countries to extradite the accused, in accordance with legal and judicial conditions and international treaties.