Al-Sadr calls for a “national majority” government in Iraq

Al-Sadr calls for a “national majority” government in Iraq 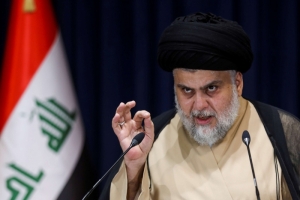 BAGHDAD – The leader of the Sadrist movement in Iraq, Muqtada al-Sadr, whose bloc led the results of the parliamentary elections with 73 seats, called for the formation of a “national majority” government to achieve reform in the country.

Al-Sadr’s call comes in light of the continuing crisis of the election results in Iraq, for more than two weeks, as the forces allied to Iran reject the announced results and consider them fraudulent and manipulated, at a time when the Electoral Commission turned to manual counting of votes in more than 10,000 electoral stations. , out of about 55 thousand polling stations, as part of its efforts to ensure the integrity of its procedures regarding the counting of votes.

Al-Sadr said in a tweet to him on his personal account on Twitter on Sunday evening, “It should not be said that I have a disagreement with the political blocs, except the issue of internal and external reform, and the issue of the difference between patriotism and subordination,” stressing, “We have no disagreement except with the love of the country, and I see that the first What should be done for the country is a national majority government.”

Al-Sadr stressed the need for Parliament to have “two parties, the first being loyalists, which form the government and undertake reforms at all levels.”

As for the second party, according to Al-Sadr, it is “the opposition, and their agreement is a binding consultation for the former without marginalization,” adding, “We do not mind being on either side, both for the sake of serving the country, and that is one of the foundations of democracy.”

The losing forces in the elections threatened to resort to the religious reference, if they did not obtain satisfactory results through manual counting and sorting, which was repeated in a number of electoral stations.

A member of the National Contract Alliance, led by the head of the Popular Mobilization Authority, Faleh Fayyad, Aqil Al-Qargoli, said that “in the event that the Electoral Commission and the Federal Court do not respond to our demands, we will press for direct intervention of the reference.”

Al-Qargoli confirmed in a press statement that “there are meetings taking place to go towards the reference.”

Observers say that al-Sadr can obtain a fatwa from the supreme Shiite authority in Iraq, Ali al-Sistani, that withdraws the cover from the crowd, especially since the factions loyal to the reference refuse to consider themselves part of it.

This parallels the aspirations of the Najaf marja’iya to reduce ties with Iran and respect the sovereignty of the Iraqi state.

Observers said that al-Sadr is putting pressure on the pro-Iranian parties that are still threatening to compete with him to form the largest bloc that would be authorized to form the new Iraqi government. By doing so, the Sadrist movement is trying to appear as a “national” force that is far from Iran’s interference.

Al-Sadr had earlier threatened to take strict steps to stop the apparent interference in Iraq’s affairs, stressing that a high-level dialogue would be opened with neighboring countries that interfere in Iraqi political, security and other affairs to prevent interference at all.

The results of the early legislative elections resulted in a few months ahead of schedule for the Sadrist movement with 73 seats, while the Taqaddam bloc led by the outgoing Speaker of Parliament, Muhammad al-Halbousi, came in second place with 38 seats, followed by the State of Law coalition led by former Prime Minister Nuri al-Maliki with 34 seats, then Kurdistan Democratic Party with 33 seats.

The Al-Fateh Alliance, the political umbrella for the Shiite militias loyal to Iran, suffered a severe defeat, as it won 17 seats after it came second in the 2018 elections with 48 seats.

The coalition led by the leader of the Badr Organization, Hadi al-Amiri, did not accept defeat, as did many other Shiite forces, and sought to overthrow this reality by waving the street and verbally escalating, accusing in all directions of widespread fraud in the elections.

Political circles are likely that Tehran played a role at this level, especially since it was not satisfied with the state of confusion and confusion that appeared on the leaders of the coalition loyal to it after the announcement of the election results.

Following the announcement of the preliminary results, the United Nations Assistance Mission for Iraq “UNAMI” and its head, Jeanine Hennis-Plasschaert, received widespread criticism and threats from parties and parties that suffered unexpected defeats, through protests organized in the country, and through campaigns of activists affiliated with it on social media.

The opponents of the results have been organizing a sit-in for nearly two weeks at one of the entrances to the Green Zone, demanding that the ballot boxes be recounted.