Three options: Scenarios for forming the next Iraqi government after the October elections

Three options: Scenarios for forming the next Iraqi government after the October elections 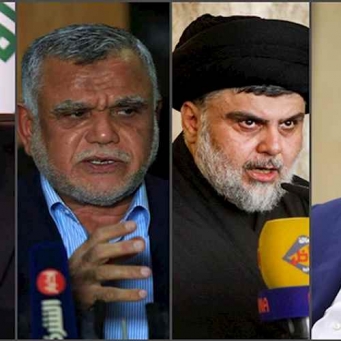 With the announcement of the full preliminary results of the Iraqi elections on October 17, the controversy renewed over the conditions for determining the largest bloc capable of forming the next government, and whether it was Al-Sadr or Al-Maliki who would go to form the next government.

The controversy over the largest mass:

Controversy renewed after the parliamentary elections over the concept of the largest bloc in the Iraqi parliament, especially after al-Maliki announced his quest to form the largest bloc, which can be detailed as follows:

1- Forming the largest bloc in the government: Article 76 of the Iraqi constitution states: “The President of the Republic assigns the candidate of the most numerous parliamentary bloc to form the Council of Ministers within fifteen days from the date of the election of the President of the Republic.” In practice, the concept of the largest bloc adopted by the Iraqi Council of Representatives in various previous sessions is the bloc that is formed after the elections from several parliamentary coalitions.

2- Maintaining the cohesion of the parties: Article 45 of the new election law No. 9 of the year 2020, states that “no deputy, party or bloc registered within an open electoral winning list has the right to move to a coalition, party, bloc or other list until after The formation of the government immediately after the elections, without prejudice to the right of the open lists, or the individual lists registered before the elections, from the coalition with other lists after the elections.”

This article means that a political party that won a certain number of seats is not entitled to be joined by other members representing other parties and blocs, that is, they change their party affiliation, or for two parties to merge together to form a new party, but it does not prevent parties and blocs from joining together to form a government coalition to lead the next government. This measure aims to maintain the cohesion of political parties and blocs, and to prevent the transfer of their members to other blocs, something that Iraq witnessed in the previous parliamentary elections.

This article apparently aimed to prevent a repetition of what happened in the 2010 elections when Nuri al-Maliki received 89 votes and Ayad Allawi 91 votes, but the transfer of deputies from one bloc to another was not prohibited at the time, and therefore a number of members moved to the owners, which made the numbers of his bloc More than 100 votes, more than the number of Allawi’s votes, which resulted in Maliki’s assignment to form the Iraqi government.

On the other hand, the interpretations of the Federal Supreme Court 2010 and 2014 confirm that the most numerous bloc is either the one that formed after the elections from one list, or that was formed from two or more lists, so the bloc became the most numerous in the first session after taking the oath.

3- Al-Maliki announced the formation of the largest bloc: On October 16, the State of Law bloc, led by al-Maliki, announced its adherence to forming the new government after it allied itself with other blocs and independent deputies to become the largest parliamentary bloc, and nominate al-Maliki for prime minister.

State of Law announced that it had held a strategic alliance with most of the blocs and lists that won the elections within a new entity called the “Coordination Framework”, which now includes about 93 deputies, and that the new alliance includes State of Law (34 seats), the Al-Fateh Alliance (17 seats), and Asa’ib Ahl al-Haq , and the rights bloc (loyal to the Iraqi Hezbollah Brigades), and other currents along with some independents.

It is clear that this announcement falls within the framework of waging psychological warfare against al-Sadr, especially with the “coordinating framework” announcing its rejection of the election results, and its threat to take to the streets, which means that it has practically lost hope of forming the next government.

On the other hand, the Sadrist movement (73 seats) and the Shiite forces opposed to Tehran, especially the extension movement (9 seats), and the independents allied with the Tishreen Revolution (11-30 seats) together constitute about 93-112 seats, which means that it is not possible in theory That the coordinating framework be able to accumulate the number of announced seats unless it allied itself with other blocs, outside the Shiite parties.

It was customary in previous Iraqi elections for the largest Shiite bloc to form the new government, meaning that the alliance is between Shiite power parties to form the largest bloc, and then it negotiates with the other Sunni and Kurdish blocs. And if this rule is preserved, al-Sadr will be able to form the next government, and al-Sadr could resort to blocking the path in front of al-Maliki, if he allied himself with one of the Sunni or Kurdish parties, specifically the Halbousi Party (37 seats) or Barzani (32 seats). , the two closest to him.

The options for forming the next government in Baghdad, and its reflection on Iranian influence, are as follows:

1- A trans-sectarian government: This scenario is represented in the formation of an alliance between the Sadrist Movement (73 seats), Al-Halbousi (37 seats), and the Kurdistan Alliance led by Masoud Barzani (32 seats), and the number of seats for this bloc will be about 142 seats, meaning that it is less than The number of seats needed to form a government, which is 165 seats, with only 23 seats. These seats can be obtained through an alliance with the “Azm” alliance (12 seats), the “Kurdistan Patriotic Alliance” (16 seats), or either of them and some of the independents, whose number is estimated at about 40 independents.

There is no doubt that such a government will exclude Iran’s allies, as it will practically mean the formation of the first majority government in the history of Iraq, as previous governments after the American occupation of Iraq included all the political forces that succeeded in the elections.

Such a scenario will represent a setback for Tehran’s influence, not only by excluding its allies, but also because such a scenario means that the base, which Iran sought to establish by forming an Iraqi government by consensus first among the Shiite blocs, will be abolished this time.

On the third hand, such a government will be an indication that Iraqi nationalism will prevail over Iranian-backed sectarianism, which is all a painful blow to Tehran. Therefore, the threat of Iran’s militias to employ armed force can be seen as Tehran’s last option in the event that al-Sadr succeeds in forming such a government.

2- Tehran militia government: This scenario assumes that Nuri al-Maliki will lead the Shiite forces allied with Iran. seats), but this coalition, if it occurs, will only be able to gather 58 seats, which is much less than the simple majority that was able to form the government, which is 165 seats, which forces it to form alliances with other parties. Therefore, al-Maliki announced his attempt to mobilize more seats than al-Sadr’s (73 seats), by allying with all Shiite forces and independents to steal the entitlement to form the government from al-Sadr, which is difficult to imagine given that most of the independents, according to preliminary estimates, are affiliated with the October Revolution. .

Al-Maliki may be heading for an alliance with non-Shiite blocs such as the Kurds to bypass Sadr’s seats, a very difficult scenario, but not impossible. The difficulty is represented in Al-Maliki’s history with the Kurds, as he had previously reneged on his promises to the Kurds, and had deliberately marginalized them, unlike the current Iraqi Prime Minister, Mustafa Al-Kazemi. Therefore, any promises made by Maliki to the Kurds will be viewed with suspicion.

There is no doubt that such a scenario will preserve Iranian influence in Iraq, but it will have repercussions on stability in Iraq, especially since most currents of the Iraqi people have expressed their rejection of the negative Iranian role and the political class associated with it.

3- An inclusive government: This scenario reproduces the same previous Iraqi governments, i.e. the participation of all the winning forces in the elections in the government. This scenario can be achieved in the event that al-Sadr and his opponents are unable to win the majority, as Tehran may turn to pressure the Kurds, or some of their parties, especially the Kurdistan National Alliance and some Sunni forces, in order to discourage them from joining al-Sadr’s government to thwart his efforts to form the next government, even in The case that he was officially assigned to form it.

Under this scenario, Sadr and Maliki will have no choice but to agree on the inclusion of all Shiite forces in the new government. Such a scenario helps save Iran’s face and gives it the ability to claim that it has not lost its influence. However, it will represent a setback for the efforts aimed at removing Iraq from the Iranian sphere of influence, even if temporarily.

In conclusion, all previous developments in Iraq reveal the decline in Tehran’s influence, but it will seek to try to accommodate this politically, by trying to steal the mandate of the next government from al-Sadr, or to form a comprehensive government, and if it fails, it will work to employ military force through its militias to impose Its influence in Iraq, which is a scenario with unsafe consequences, will increase the level of hatred for it in the Arab and Shiite streets.