This is why Muqtada al-Sadr’s movement won the Iraqi elections, and its Shiite rivals failed

This is why Muqtada al-Sadr’s movement won the Iraqi elections, and its Shiite rivals failed 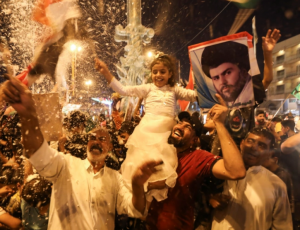 BAGHDAD – The victory of the Sadrist movement – led by Muqtada al-Sadr – in first place in Iraq’s early elections raises question marks about the centers of power that the Sadrists possessed behind the scenes of managing the voting process.

This force resulted in the Sadrist bloc winning 73 seats in the upcoming parliament, and observers attribute it to several factors, most notably the personality of al-Sadr, who comes from a prominent religious family and enjoys wide popularity in Iraq, in addition to his adoption of a policy of distancing himself from the ruling political class in Iraq, which he has repeatedly accused of corruption. Although his bloc won first place in the 2018 elections, this did not prevent al-Sadr from maintaining the same position in the 2021 poll, the results of which ended with his rivals in the Shiite alliances losing a large number of seats.

Hussein confirms the work of the Sadrists with the criterion of zoning since 2010 and its continuation until the elections of 2014 and 2018. He points out that the Sadrist electoral machine relied – at first – on the population ratios of each electoral district, then transformed these districts into electoral squares (one district included 3 squares and sometimes 4 to 6 squares) with each square maintaining its fixed population percentage, and he says that only one person was nominated for these squares drawn by the Sadrist electoral team, bringing the total of Sadrist candidates in one constituency to more than 3 candidates.

Hussein adds – in his speech to Al Jazeera Net – that the second electoral district has been allocated 4 seats in the new parliament. Under the aforementioned division, the Sadrists achieved 3 seats out of 4 that were allocated previously. Among the methods adopted by the Sadrist movement in the elections is the creation of an electronic application for its audience spread in all electoral districts, and this application used a GPS system to help the voter Al-Sadr’s knowledge of the divisions of his constituency, his spatial square, and the candidate to be voted for, according to the division shown by an application that was later called “the Sadrist voter application.”

Explanations of Competitors Al-
Sadr ran in the elections with a list called the Sadrist Bloc, which won 980,000 votes in all electoral districts scattered throughout the Iraqi provinces, which is the highest percentage achieved by the Sadrist movement at the expense of its other competitors, especially since the difference between al-Sadr and his closest rivals reached 400,000 votes.

On the other hand, Saad Al-Saadi, a member of the Al-Fateh Alliance headed by Hadi Al-Amiri (who won 17 seats, and this percentage is considered a defeat for his allied lists after he achieved 47 seats in the 2018 elections) confirms that the electoral coalition team made efforts to organize the process of distributing candidates and arranging the votes of their audience; It was hoped that the list would have a sufficient number of seats that would qualify it to be the largest bloc, indicating – in his speech to Al Jazeera Net – that the election results announced by the commission were inaccurate and that the commissioners’ performance was confusing and they were not up to the task assigned to them, especially since there are indications that there are Huge tampering with polling results. Al-Saadi added that the Al-Fateh coalition submitted more than 100 appeals and complaints documented with evidence proving the existence of fraud in the election results.

Technical vision
The expert in electoral affairs, Safa al-Moussawi, attributes the reasons for the discrepancy in parliamentary seats and electoral votes between coalitions and lists to the electoral division adopted in the new law. The new electoral process is the tipping of one party over another.

Al-Moussawi continues his speech that the losing lists did not sense the danger of the multiple constituencies until after the results were announced, especially since the current division did not comply with international standards that insist on the existence of known geographical and administrative boundaries for the country in which the voting process is taking place.

Al-Sadr announced that his bloc would not participate in ministerial positions. Al-Sadr hails from a prominent religious family and enjoys wide popularity in Iraq (Al-Jazeera)
Al-Moussawi’s opinion intersects with what the professor of media and propaganda at the Iraqi Ahl al-Bayt University says, Ghaleb al-Daami, who believes – in his speech to Al Jazeera Net – that the Sadrist movement was He is smart in dealing with the electoral division by adopting a plan for distributing candidates according to the population ratios of his audience spread in the electoral districts.

Al-Daami confirms that the Sadrists’ success rate in the new law has reached 85%, and there are several factors that helped him win, most notably investing the mistakes of his rival parties, most notably their failure to nominate independents on their list and their adoption of a clear electoral discourse, unlike some forces and blocs that focused on fighting and attributed The decline of reconstruction and development in the country to foreign conspiracies.