Iran is preparing the votes, controlling the blocs, and paving the way for the Maliki-Sadr alliance

Iran is preparing the votes, controlling the blocs, and paving the way for the Maliki-Sadr alliance 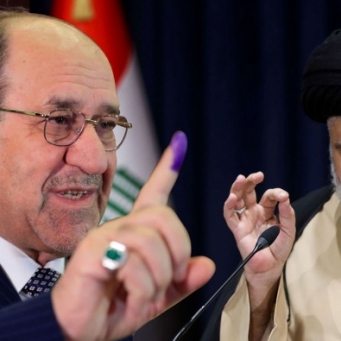 Both sides of the “Shiite duo” in Iraq are engaged in sharp verbal confrontations, but Iranian calculations say that they will eventually return to agree on an alliance that will lead to the formation of a huge bloc, not just a “bigger” bloc that includes the two parties and includes all the other large blocs.

Nuri al-Maliki, who leads the coordination of Shiite militias and blocs loyal to Iran, called on the High Elections Commission to fix the “glitch” that afflicts the electoral process and not favor any of the competing political parties.

Muqtada al-Sadr, the leader of the “Sadr Movement” bloc, responded with a message in which he considered al-Maliki’s words “insufficient.” Addressing al-Maliki, he said that “what has been lost cannot be compensated by clinging to power and domination, as he has tried and has not succeeded,” and added that “the tried cannot be tried.”

Iran has sent observers, for its part, to participate in the recounting and counting of votes, and has so far guaranteed an increase in the number of seats for the “State of Law” bloc led by Maliki to 40 seats, and the “Fatah” bloc, which includes militias loyal to it, to 20 seats.

And the influential Iranian newspaper, “Tasnim,” stated that elements of the Revolutionary Guards’ intelligence are checking the results of the recounting of a number of departments and the rest of the procedures for manual counting. She said, “The solution to the election results crisis is to count the votes manually, in the presence of representatives of political groups.”

A delegation from the Quds Force of the Iranian Revolutionary Guard is participating in the consultations to bring together the different blocs. However, the results still put both sides of the “Shiite duo” in front of a clear numerical shortage.

Abdul-Hussein Al-Hindawi: It is up to the commission to complete the appeals or re-election

In principle, the Sadr bloc, which has 73 seats, can form a “larger bloc” with the Kurdish bloc, which has about 57 seats, to gather 130 seats. Al-Maliki’s bloc can also gather about 132 other seats by including the Muhammad al-Halbousi and Khamis al-Khanjar blocs, which have about 59 seats, along with some independents.

But the most important calculation is that neither side of the “Shiite duo” can proceed with the formation of the government in isolation from the other party, because this will eventually lead to the outbreak of an armed conflict, in which neither of them will likely exit.

Iran guaranteed al-Maliki’s bloc support from the two Sunni lists led by al-Halbousi and al-Khanjar to put pressure on al-Sadr, so that he does not exaggerate in seeking to form a government alone.

Well-informed political sources said that Ismail Qaani, commander of the Quds Force, met with al-Halbousi and al-Khanjar on the fourth of this month inside the Iranian embassy in Ankara after the end of their meeting with Turkish President Recep Tayyip Erdogan and obligated them to continue their alliance with the state forces under the command of Nuri al-Maliki and Hadi al-Amiri.

The same debate over recount can last for weeks or even months. Although the Electoral Commission provided indications that the percentage of votes being examined does not exceed 6 percent of the total votes, changing the percentage of seats could raise more objections and appeals, which can only end in one of two ways: First, that The two sides of the Shiite conflict stop quarreling with each other, so that the small details of their agreement diminish in front of their agreement, or that the elections take place in their entirety. This is a danger that could awaken all the ghosts of fears again, including the return of the parties that decided to boycott to enter the competition, so the chances of the pro-Iranian parties recede again, and with them the chances of the Sadr bloc as well, for a force of independents, “Octobers” and others to emerge, making matters more complicated for everybody.

Adviser to the Prime Minister for Elections Affairs, Abdul-Hussein Al-Hindawi, said, “It is up to the commission to decide between completing the consideration of the appeals and calling for a re-election. The government never interferes in the commission’s work.

He stressed that the government’s role is limited to two duties: providing logistical support to the commission and providing appropriate security conditions for the elections.

Thumbnail
Observers believe that al-Sadr is too weak to go with the option of forming a bloc in isolation from al-Maliki’s bloc. While the head of the political body of the Sadrist movement, Nassar al-Rubaie, was quoted as saying that the next prime minister will be from the Sadrist movement, and that his movement will be responsible for the next government, but hours did not pass until the statement was denied.

In paving the way for an atmosphere that allows saving the political system based on the solidarity of Shiites loyal to Iran and hesitant, al-Maliki said that “the democratic path is the only way to embody the will of the people and produce the authority that expresses its free and independent decision. And he will remain keen on him and defending him, no matter the cost.”

What is meant by the “democratic political system, its stability and sustainability” is the sectarian quota system, which must continue with its previous mechanisms.

These mechanisms are based on the different groups and militias sharing positions of influence within the state, which is the same reality that allowed all these groups to become hegemonic powers. This is something that serves the interests of these parties as well as the interests of Iran, and keeps the country subject to the same cycle.