Preliminary observations on the results of the Iraqi elections

Preliminary observations on the results of the Iraqi elections 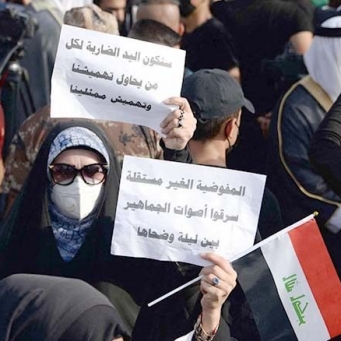 On Monday, October 11, the preliminary results of the early Iraqi parliamentary elections were announced. The moment of the announcement witnessed a clear confusion in the performance of the Independent High Electoral Commission, which exacerbated the tension caused by the results themselves!
The preliminary results indicated an unprecedented victory for the Sadrist movement, as it has so far won more than 70 seats, i.e. just over 21% of the seats in the House of Representatives. The State of Law coalition headed by former Prime Minister Nuri al-Maliki won 35 seats that can be increased, an increase of 10 seats than it obtained in 2018, and the Kurdistan Democratic Party obtained 32 seats, a number that it did not reach in any previous elections.On the other hand, the Al-Fateh coalition and the forces of the national state (which includes the Wisdom Movement led by Ammar al-Hakim and the Victory Alliance led by former Prime Minister Haider al-Abadi) lost, as the former obtained only 14 seats in these preliminary results, while it had obtained 48 seats in the 2018 elections. The second coalition gets only 4 seats after they combined more than 62 seats in the 2018 elections (the Victory Alliance at that time won 42 seats, while the Wisdom Movement won 19 seats) and the Islamic Party and the Solution Party (which is affiliated with the Azm Alliance) did not get For any seat in this election.These results prompted the losers, accompanied by al-Maliki, to revive the so-called coordinating framework, and they issued a statement declaring their rejection of the election results in full if any fraud, manipulation or mismatch between manual and electronic counting and sorting was proven, and also reviving the “Al-Binaa Alliance” that was formed in 2018 and included the alliances of conquest and the rule of law and others, but this time with the joining of wisdom and victory!
The confusion of the Commission, which is not new in any case, as we have witnessed previous cases of confusion in the course of its work during nearly two years) led to a wave of widespread skepticism about the election results, especially after the Commission announced that more than 12 thousand stations had not been added to the announced results. It is 8273 stations, with one station from an electoral center that must be manually counted and counted in order to match them with the results of the electronic counting and sorting as decided by the election law, and 3100 other stations whose electronic results did not reach the National Center through the transmission medium or the memory stick (the flash) did not arrive. own before announcing the preliminary results, and this was a major flaw in the work of the Commission!
First, the commission had to announce that the preliminary results represented 89% of the results only, not to announce these results in the confusing way in which they were announced, and secondly, it had to announce the results of the 8,273 stations within its announcement of the preliminary results, and then randomly select these stations in the presence of Agents of political entities, to have data that can be verified after matching, not to withhold the results of these stations and then announce, later, that the matching has been done and that it was 100%, in the absence of monitoring of this selection process, first, and the matching process second!

It is not possible to measure the power relations between the Saeroon Alliance / the Sadrist Movement, which has won more than 70 seats, and the Al-Fateh coalition, which has won 14 seats so far, based on the number of seats. Rather, the strength of each of them is measured by the parallel weapons they possess.

Moreover, the commission did not refer, either from afar or from close, to what is stipulated in Article 39/c of ​​the Elections Law, which obliges it to conduct a process of interrupting the fingerprints of voters in private and public voting within a period not exceeding 10 days from the date of the general polling, meaning that the deadline will end on 20 of this month!
Announcing the results of the stations that were matched, and then talking about 3100 other stations whose results were not published, which represents 6% of the number of stations, formed a favorable atmosphere for the increase in the volume of skepticism about the results, especially since some of the changes that took place seemed like attempts to satisfy the losers! Especially in light of the accumulation and crisis of confidence resulting from the politicization of the work of the Independent High Electoral Commission in Iraq from the moment it was formed in May 2004, when it turned, in the end, into a mere representation of the parties! We said in an article last Friday that the conflict in Iraq is not a political conflict governed by the election results, but rather a more complex conflict because many political forces have declared armed wings, and therefore it is this weapon that governs the political equation and not the number of seats that this party obtained or that.
Therefore, it is not possible to measure the power relations between the Sairoon Alliance / the Sadrist Movement, which has won more than 70 seats, and the Al-Fateh coalition, which has won 14 seats so far, based on the number of seats. It is Iran, and the nature of the alliances that they can reach with the other blocs and the extent of their solidity.
Therefore, what is happening now is waiting for the formation of a solid Iranian-backed alliance consisting of the State of Law and Al-Fateh and those with them (the National Contract Alliance, the Alliance of State Forces, and some of the independents who will join them) and the seats of these will be within 60 seats until the moment, and they can be increased with the presence of an atmosphere A general firmly believes that the preliminary results will necessarily witness “codified” changes, to satisfy the losing militants first, and to reduce the difference between them and the Sairoon Alliance to the lowest possible percentage! Which will make both parties, obliged, and not given the choice, to form an alliance between them to be the most numerous bloc that nominates the next prime minister, which will ultimately mean that the next prime minister will not come out of the cloak of either of them, but rather will be a compromise candidate accepted by both parties, whether This bloc, the most numerous as required by the constitution, was announced, or not, in a repeat of the 2018 scenario.