Al-Sadr’s bloc is at the fore..Political and armed forces reject the results of the Iraqi elections

Al-Sadr’s bloc is at the fore..Political and armed forces reject the results of the Iraqi elections 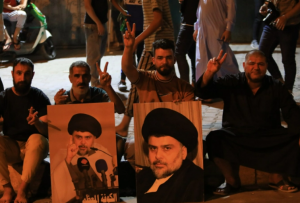 The Iraqi News Agency announced that the “Sadr Movement” bloc led by Muqtada al-Sadr came – according to preliminary results – in first place in the parliamentary elections, while Shiite political forces and armed factions from the Popular Mobilization announced their rejection of the results.

The official agency stated that the Sadrist bloc topped the results with 73 seats out of 329, while the “Progress” bloc led by dissolved Parliament Speaker Muhammad al-Halbousi won 38 seats, and in the third place came the “State of Law” bloc led by former Prime Minister Nuri al-Maliki with 37 seats.

The Iraqi constitution stipulates that the bloc that can gather 165 seats in the new parliament can form the new government.

The group said – in a statement issued yesterday evening, Monday – that it will take all available measures to prevent voter tampering, as it put it.

She added that, in the interest of the democratic path and to achieve the obligations of early elections called for by the religious authority and confirmed to be free, safe and fair, we submitted all technical observations (on the voting process) to the Electoral Commission, and the Commission pledged to address all these problems with practical steps.

However, she pointed out that the Commission “did not abide by all the legal procedures it announced, and accordingly; We announce our appeal against the announced results and our non-acceptance of them, and we will take all available measures to prevent voter tampering,” the statement said.

The “Coordination Framework” group includes political forces and factions of the Popular Mobilization, most notably the “Al-Fateh Alliance”, “State of Law” and “Asa’ib Ahl al-Haq”, as well as the “Hezbollah Brigades”.

Fraud and deception
For his part, the security advisor to the Hezbollah Brigades in Iraq, Abu Ali Al-Askari, said that what happened in the elections represents the biggest fraud and deception against the Iraqi people in modern history.

Al-Askari added – in a statement – that the battalions stand firmly and insistently to restore matters to the right place, as he described it.

He said that members of the Popular Mobilization are the main targets, and called on them to prepare to defend what he described as their sacred entity.

The Independent High Electoral Commission in Iraq had announced that the results of the manual counting and sorting matched the electronic ones, and the head of the commission, Jalil Adnan Khalaf, said that the commission would start receiving appeals from today, Tuesday, for a period of 3 days.

For his part, the leader of the Sadrist movement in Iraq, Muqtada al-Sadr, stressed that there is no sharing of power at the expense of the people.

He added – in a press conference – that any interference in Iraqi affairs will have a diplomatic and perhaps popular response, according to what he said. Al-Sadr also demanded that arms be confined to the hands of the state.

The elections, which were held the day before yesterday, Sunday, came a year earlier than they were scheduled, after widespread protests in Iraq, starting in early October 2019 and lasting more than a year, and overthrowing the previous government led by Adel Abdul-Mahdi in late 2019.