Saleh and Al-Kazemi appeal to voters to “correct course”

Saleh and Al-Kazemi appeal to voters to “correct course” 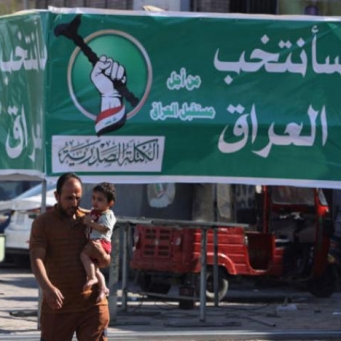 Iraqi President Barham Salih and Prime Minister Mustafa al-Kadhimi, as the pillars of executive authority under the Iraqi constitution, believe that they have fulfilled their promise to hold early and fair elections. According to the consensus that occurred regarding the assignment of Al-Kazemi to head the government by President Saleh and the presence of all Iraqi leaders from the first line in the Peace Palace, the early elections were the challenge that Al-Kazemi had to pass.
Despite the challenges that Al-Kazemi faced during less than a year and a half of his premiership, he was eventually able to complete all the requirements for conducting sound elections, and this was confirmed by the “special vote” the day before yesterday, Friday. Although Al-Kazemi succeeded in many important internal and external files in which previous governments failed, his opponents consider him accountable to Saleh. Among what these opponents say is that Saleh was the one who brought him after his refusal to assign the candidate of the Shiite forces, Asaad Al-Eidani, in a constitutional violation.
Today, after a conflict that seemed violent in some of its joints between Saleh and Al-Kazemi, on the one hand, and their opponents, on the other, threatening to use weapons against them and storm the Green Zone, preparing the appropriate ground for holding elections amid seemingly strict international control this time is an achievement that cannot be overlooked. . Although each of the two men could leave their position, they were the most insistent on holding early elections on the agreed date, noting that Al-Kazemi had set an earlier date, which is last June.
Yesterday, President Saleh called, in a televised speech, to the Iraqis to actively participate in the elections, which he considered “critical, major and foundational.” In his speech, Saleh said, the elections are “an opportunity to build a state capable of correcting wrong paths, facing major challenges, striking corruption, working on revising the constitution and strengthening the country’s independence and sovereignty through a new political and social contract.”
He added that “correcting the paths and building a capable state, will not be achieved without the formation of a parliament that expresses the true will of the Iraqis without value or guardianship, and is able to form an effective government that responds to challenges and entitlements without complacency or appeasement.” Saleh acknowledged the existence of “a structural defect that accompanied the system of governance after 2003,” calling for today’s elections to be “a national moment to restore the Iraqi initiative and achieve the desired reform through appealing to the people as the source of the legitimacy of government.” He promised that “adopting the new election law, and forming a new commission along with support, in order to overcome the deficiencies in the previous electoral processes that obstructed the peaceful path of reform and change” are the correct preludes to change, noting that “wide, conscious and discreet participation in the elections will be a turning point. in the fate of our country, and it will achieve the true representation of the people, impose their will, and block the path of stalkers and those who try to manipulate the fate and future of the country.”
Yesterday evening, in a televised speech, Al-Kazemi called for wide participation in today’s vote, saying, “We are in front of a historic opportunity that must not be lost for comprehensive reform and the election of the fittest.” He continued: “Steps that separate us from the elections to keep the whales of corruption away and create the future, and do not waste your votes to make a required transition in political life.”
While all the data confirm that the percentage of participation in the elections today will be the highest compared to the past four sessions in light of what happened in the special voting, the Iraqis’ motive for this is to change the reality of the situation for the better. But from the political point of view, at a time when the Shiite component monopolized the decision-making in the state, the Kurds and Sunnis are now working to change the equation from mere participation in government through the distribution of positions to partnership in political decision. While the calls of the Sunni Arabs seem less effective due to the outbreak of internal Sunni-Sunni disputes that are governed by a regional atmosphere that makes their calls for change incapable of being dealt with seriously, the Kurds, despite their internal differences, are still able to deal with the ruling political forces in Baghdad as a constitutional and national region looking for partnership at home.
In this context, the President of the Kurdistan Regional Government, Masrour Barzani, recently sent a message in Arabic to Baghdad, in which he called for “commitment to the constitution and consensus.” “I would like to send a message from the Kurdistan region to all the brothers and sisters throughout Iraq, the message of Kurdistan is the message of peace, coexistence, stability and reconstruction,” Barzani said in a televised speech that was read in proper Arabic.
“We demand the implementation of all the provisions of the constitution and a return to true partnership, consensus and balance,” he added. Barzani called for “electing KDP candidates in other provinces, and working with us to transfer Kurdistan’s successful experience to the rest of Iraq’s provinces.”