Barham Salih looks forward from Erbil to a second term: I have a lot to offer for the post of president

Barham Salih looks forward from Erbil to a second term: I have a lot to offer for the post of president 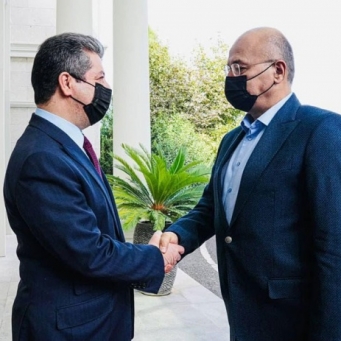 Sources close to Iraqi President Barham Salih confirmed that he did not hesitate to announce his desire to continue for a second presidential term. The sources said in a statement to “Al-Arab” that Saleh enjoys a regional consensus on the importance of his balanced role in the Iraqi presidency, as well as working on rapprochement between the countries of the region.

She added that the Sunni and Shiite political forces see in favor of the most suitable for this position, but the matter ultimately depends on the Kurdish parties’ agreement to renew him for a second presidential term after the parliamentary elections, which are hoped to be held on the tenth of next October.

The Iraqi president visited Erbil on Friday in conjunction with announcing his aspiration for a second term in the presidency, noting that this depends on the results of the elections.

“My first task is to conduct the elections in peace, and I look forward to getting a second term, as I have a lot to offer in this position,” the Iraqi president said during a television interview.

It is noteworthy that the position of the President of the Republic is from the Kurds’ share according to the sectarian and national quotas that have prevailed in the political system since 2003, while the Shiites hold the position of prime minister, and the Sunnis head the parliament.

The same sources attributed the Iraqi president’s visit to Erbil to urging the leadership of the Kurdistan Democratic Party, headed by Massoud Barzani, to renew him for a second term.

The leadership of the two main parties, the Patriotic Union of Kurdistan headed by the family of the late President Jalal Talabani, and the Kurdistan Democratic Party led by Massoud Barzani, must agree on the personality of the President of the Republic.

Haider Al-Mulla: The Iraqi political environment is immature and suffers from a crisis of confidence

Although Saleh did not meet with Masoud Barzani during his visit to Erbil, but he discussed with the President of the Kurdistan Regional Government, Masrour Barzani, the latest developments and developments in the situation in Iraq and the region, and the outstanding problems between the federal government and the region.

The official statement about Saleh’s meeting with Barzani did not mention the issue of renewing the position of president, but the source close to Saleh confirmed that he did not hesitate to discuss the issue of the second term with the Kurdish leaders.

The statement stated that “they were discussed about the upcoming Iraqi elections, with an emphasis on being free and fair, guaranteeing the rights and aspirations of all Iraqi components, and contributing to achieving security and stability in Iraq.”

Saleh had split from the National Union after disagreements with his leadership following the departure of President Talabani, and formed a party to run in the general elections in 2018, which did not achieve significant results, but he returned to his mother party in a deal that included abandoning his political ambition in the Kurdish region, in exchange for his candidacy for the position of President of the Republic.

Observers rule out that Saleh would think of leading a broad political project, as far as continuing the position of President of the Republic, which witnessed a political understanding with Prime Minister Mustafa Al-Kazemi in multiple files.

Saleh, in his alliance with Al-Kazemi, raises the fears of the Kurdish forces, led by the Kurdistan Democratic Party and its leader Barzani, and Al-Kazemi’s alliance with Saleh provokes the Shiite parties who agreed to assign him to lead the government after he pledged to them not to run for elections.

Khaleda Khalil: The upcoming elections will not change the three presidential positions

There was a lot of speculation about the possibility of President Saleh’s alliance with Prime Minister Mustafa Al-Kazemi within a political project that covers the entire area of ​​the country, and they are close friends for decades, and politicians who are similar in their liberal inclinations and their friendships with the Gulf states, the West and the United States.

Observers say that the chances of Barham Salih returning to playing political roles within the Kurdistan region are no longer great, despite his attempts to open up politically to the region during this stage, and that his hopes will be placed on other options, including trying to invest the regional momentum that the position of the President of the Republic made available during the last period after a visit Leaders of Arab countries to Baghdad.

The majority of political readings, days before the parliamentary elections, unanimously agreed not to change the quota map for senior presidential positions.

Former parliamentarian Haider Al-Mulla, and the current candidate for the Progress bloc headed by Muhammad Al-Halbousi, believes that “the situation after the elections will remain as it is because of the foundations on which the political process was built,” noting that “it is possible to change the building walls, but it is difficult today to change these foundations.” “.

In a statement to Rudaw Network, Al-Mulla pointed out the lack of will on the part of the political blocs for change, and the political environment is immature or stable and suffers from a crisis of confidence.

“Today, there are conflicts, not Sunni-Shiite-Kurdish, but within the same components, all of which prevents any radical changes in the political process,” he said.

Representative Khaleda Khalil, a member of Parliament for the Kurdistan Democratic Party, says that “the positions were distributed to Shiites, Sunni Arabs and Kurds according to understandings and not according to the constitution, and therefore this is customary to satisfy the three components and is not a law that must be adhered to,” noting that “the upcoming elections will not change this. presidential positions.