Accelerating the withdrawal of US combat forces from Iraq: support for Al-Kazemi and the success of the elections

Accelerating the withdrawal of US combat forces from Iraq: support for Al-Kazemi and the success of the elections 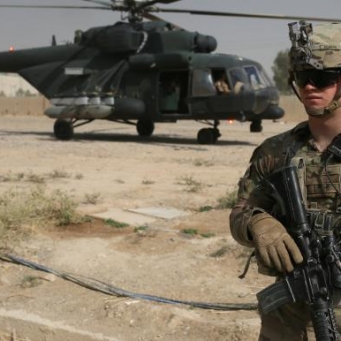 In the first practical measure to implement the Iraqi-American agreement to withdraw combat forces from the country by the end of this year, Iraqi and American military leaders held an expanded meeting in Baghdad, on Friday morning, which led to an agreement stipulating the start of the process of reducing American combat capabilities in the country, which are located within two bases. “Harir” in Erbil and “Ain al-Assad” in Anbar, with the completion of the operation at the end of September.
Iraqi observers and politicians considered, in statements to Al-Araby Al-Jadeed, that the new development at the level of the US military presence file will serve to create a stable atmosphere ahead of the parliamentary elections scheduled for the tenth of next month, especially with regard to the armed factions allied to Tehran, which insist On the expulsion of foreign forces from the country in exchange for stopping their repeated attacks on the camps and bases where the American forces are located. But, on the other hand, they expressed their fears of the political and security repercussions of the step, in terms of the forces allied to Tehran deploying this withdrawal, as well as encouraging the remnants of the “ISIS” organization to organize its ranks and carry out operations that exhaust security in the country and restore tension to it.

The announcement of the reduction of forces represents the beginning of the implementation of the agreement to change the mission of the American forces from combat to advisory and training for the Iraqi forces and Peshmerga units in the Kurdistan region of Iraq. According to Iraqi officials, the US negotiating delegation headed by General John Brennan, commander of the Operation Inherent Resolve forces in Iraq, who has been in charge of combat operations against ISIS since 2017, and supervising the restructuring of Iraqi military units, will move today, Saturday, to Erbil, where the “Harir” base is located, and from there to the “Ain al-Assad” base in Anbar, where he will supervise the implementation of the final steps to start the process of withdrawing the combat units located in the two bases.
An Iraqi official in the Joint Operations Command said that there are issues that are still waiting to be resolved during the next two days, including the American “Patriot” system and the combat helicopters located in the two bases, and the steps that Iraq should take regarding protecting American soldiers and contractors after the withdrawal of combat forces, and ensuring that no Those forces were subjected to missile attacks similar to those that are currently taking place. The official confirmed, to Al-Araby Al-Jadeed, that “Iraq pressed towards accelerating the process of starting the withdrawal this month instead of next October, for political reasons related to the elections, in addition to the return of threats from armed factions and forces in this context.”

Arab reports The
American withdrawal from Iraq: political and security effects
The official acknowledged that “there are many details that have not been finalized, so the American delegation will remain in Baghdad to reach understandings about them, including political forces’ questioning of the reality of the situation inside the Harir base in the Kurdistan region, and that There are understandings between Kurdish and American leaders regarding the survival of al-Qaeda as an area of ​​operations, the importance of which is linked to the American presence in the Syrian east adjacent to Erbil.” He said that “Washington agreed to hand over to Baghdad a list of the remaining numbers (of soldiers) and the quality of the equipment in the two bases, as well as the submission of US military aircraft designated for transportation purposes to Iraqi approvals to enter the airspace, which was not previously available.”
According to an Iraqi military statement, a meeting was held in Baghdad, yesterday, Friday, between US and Iraqi officials, headed by the Deputy Commander of Joint Operations, Lieutenant-General Abdul-Amir Al-Shammari and Brennan, within the framework of technical talks, and a plan to transition to a non-combat role for the international coalition forces operating in Iraq, according to an Iraqi military statement. The outcomes of the meeting held in Washington, at the end of last July, between Prime Minister Mustafa Al-Kazemi and US President Joe Biden. He added that “the two parties agreed to reduce the combat units and American capabilities at the military bases in Ain al-Assad and Erbil (Harir base), to be completed by the end of this September.” It was also agreed to “reduce the level of the leadership of the international coalition from a headquarters led by a lieutenant-general (general) to a smaller headquarters led by an officer with the rank of major general, for the purposes of management, support, equipment, and the exchange of intelligence information and advice.” He pointed out that “the two parties reiterated that the presence of US forces and the international coalition forces is at the invitation of Iraq, and depends on the provision of protection from the Iraqi government in accordance with international laws and norms, in line with Iraqi sovereignty. The two sides also agreed to hold regular sessions to complete the discussion of the remaining steps to secure the transition to a non-combat role for the international coalition forces by the time set for them at the end of this year.

Abbas Al-Zamili: The announcement is an acceleration by the Iraqi government of the steps of the American withdrawal from the country

And the spokesman for the international coalition, Colonel Wayne Maroto, announced that the Iraqi security forces in 2021 are stronger and more capable than before, because they achieved a distinct tactical advantage against ISIS. “Since 2014, the 83-member coalition has continued its commitment to support our partners in the Iraqi forces in their fight against ISIS and to strengthen Iraqi security institutions and forces,” he said.
There are currently about 2,500 American soldiers in Iraq, whose tasks are focused on confronting what remains of the “ISIS” organization, but this role will change by the end of this year to be limited to training and advising the Iraqi army. Al-Kazemi’s government seems serious in this regard, as the Prime Minister recently discussed, with an American military delegation, headed by the commander of the Central Command, General Kenneth McKenzie, accompanied by the American ambassador to Iraq Matthew Tueller, about the withdrawal and the continuation of cooperation between the United States and Iraq.
A member of the Security and Defense Committee, Abbas Al-Zamili, who is also a member of the “Al-Fatah” coalition, which is considered a political wing of the Popular Mobilization, described the announcement as “the end of one stage and the beginning of another.” He told Al-Araby Al-Jadeed that the 2014 scenario will not be repeated in Iraq, and the existing forces are sufficient to prevent any security collapse, and it is not possible to compare Iraq and Afghanistan. It is true that there are terrorist operations and attrition operations, but confronting them also continues.” And he indicated that “Friday’s announcement is an acceleration by the Iraqi government of the steps of the American withdrawal from the country, but in practice the end of this year is the ceiling for the gradual completion of withdrawals, which will give the Iraqi forces an opportunity to make the necessary preparations.” He stressed that “there will be no setbacks to the decision, and that Baghdad must maintain its relationship with Washington, to ensure that Iraq will not be a party to any regional or international conflict in the future.”

The Iraqi security and political expert, Ahmed Al-Nuaimi, considered the announcement as a new dose of support for the Al-Kazemi government and efforts to organize the upcoming elections, but he considered, at the same time, that it would be used by the factions and armed forces allied to Tehran as a military and political victory for it. According to Al-Nuaimi, the Iraqi and American sides are so far in agreement regarding the survival of the coalition’s air cover, in which the US Air Force forms the backbone, and practically handles more than 90 percent of the air sorties, but he warned that this announcement would also represent an encouraging motive for the remnants of the “ISIS” organization. “To reorganize its ranks and work to carry out specific attacks, aimed at embarrassing the United States and portraying the operations as one of the results of this withdrawal, in addition to creating new tension in the country from which the sectarian side will not be far from, in the type of attacks that they can carry out.
Al-Nuaimi described Al-Kazemi’s government as facing a new real test in a very short time, without ruling out that Washington’s keenness to complete the final understandings regarding the nature and form of the American presence in Iraq during the period of Al-Kazemi’s government, aims to block the path for the next government in the event that it thinks of reformulating the understanding, From changing the missions and nature of foreign forces to a complete withdrawal.