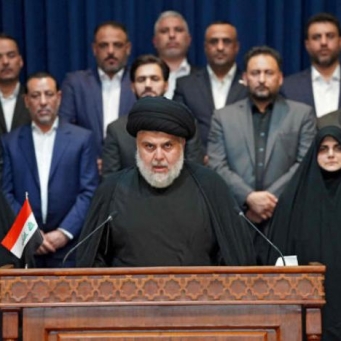 After the leader of the Sadrist movement, Muqtada al-Sadr, announced his approval of the contents of the political document presented to him by the main forces in Iraq, and consequently his announcement of his conditional return to the electoral race until he breathed a sigh of relief, and suffocated those who suffocated by this return.

After al-Sadr’s speech, which signaled to his supporters the readiness of the two million people, according to his terminology, which he prefers to use in his political speeches to contest the upcoming elections, the forces that were reluctant to announce their propaganda campaigns announced their launch as well, while the forces that were happy with al-Sadr’s withdrawal seemed confused about how to Dealing with this new development, albeit not surprising. If those waiting for al-Sadr’s return or not need to clarify whether the parliamentary elections scheduled to take place on the tenth of next October will actually take place in the absence of al-Sadr or not, the accounts of all parties differed this time. however; There is a party that lost twice, the party that announced its withdrawal from the electoral race after al-Sadr’s withdrawal, led by the National Accord Movement led by former Prime Minister Iyad Allawi, and the Iraqi Communist Party, which was al-Sadr’s ally in the last elections, where it won two parliamentary seats. This party lost because it bet on al-Sadr’s withdrawal as a final decision; This made him, along with many other forces (small parties) want to support al-Sadr’s decision by expanding the opposition base. He lost the current round of the electoral race; Because he can no longer risk returning because he will be seen as a follower of the transformations of al-Sadr and his current.

And based on the current political conflict between the Iraqi forces, which is a semi-World Cup qualifiers as much as it is intended to win the largest number of seats for each party or bloc, and ultimately for each of the three main components (Shiites, Sunnis and Kurds), the most important thing in this conflict is how to agree on The three presidencies from now on (the Shiite prime minister, the Sunni parliament speaker, and the Kurdish president), but who are they?

While it seemed that the chances of the current Prime Minister Mustafa Al-Kazemi declined for a second term during Al-Sadr’s withdrawal, Al-Sadr’s return brought his name back to the forefront of the name trading process.

Among the names being circulated, in addition to Al-Kazemi supported so far by Al-Sadr and the leader of the Kurdistan Democratic Party, Masoud Barzani, the National Security Adviser and former Minister of Interior Qassem Al-Araji, Adnan Al-Zarfi, the former commissioner to form the government before Al-Kazemi, and Muhammad Shia Al-Sudani, a former candidate for prime minister, In addition, the parties to the State of Law coalition led by Nuri al-Maliki presented the latter as one of the options for forming the next government, especially after his visit to the Kurdistan region.

And according to what is being circulated in closed rooms as well, and according to the same sources, while the prime minister (name and position) is a Shiite-Shiite choice, the candidates for the posts of the presidents of the Republic and Parliament, even if they are a Sunni-Kurdish option, will not pass any of them from all the filtering stations for the World Cup. The race unless it passes through the Shiite gate. The Kurdish president is nominated by the two Kurdish parties, but unless it is agreed upon with the main Shiite forces, it will not pass, as is the case with the speaker of the Sunni parliament. And because the differences are now great within the Kurdish and Sunni houses, it is expected that the Kurdish and Sunni options will be fragmented at the level of the candidate, which complicates their task in front of the Shiite forces during the nomination and even after winning the position. If the Kurds do not agree on one candidate for the presidency and put forward more than one candidate, his victory will be with Shiite approval, which weakens his position and role.

So; At a time when many believe that the process of forming the next government will be the most difficult because of the difficulty of crystallizing large forces in light of the current election law, the prior agreement on the three presidencies, even if it seems as if it was putting all the horses before the chariots, will greatly help in forming a government faster than many expect. .