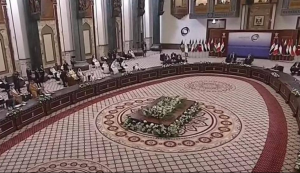 The countries participating in the Baghdad conference to enhance cooperation and partnership unanimously agreed on the importance of supporting Iraq during the next stage and contributing to its reconstruction.

In his speech, French President Emmanuel Macron said that holding the Partnership and Cooperation Conference in Baghdad “is a victory for Iraq.”

“We support Iraq’s sovereignty in order to ensure its security, we support the Iraqi people in the field of reconstruction, and we continue the war on terrorism,” he added.

For his part, Jordan’s King Abdullah II said that “Iraq plays a central role in promoting regional dialogue,” expressing “support for Iraqi efforts to combat terrorism and extremism,” stressing the need to “adopt a policy of balance and openness.”

The same thing was confirmed by Egyptian President Abdel Fattah El-Sisi, in his speech, where he expressed “his country’s support for Iraq to restore its historical position in the Arab world,” calling for stopping interference in the affairs of countries in the region and launching a new phase of cooperation with Iraq.

And he continued, “We are confident in Iraq’s success in meeting the upcoming elections, and we reject all foreign interference in Iraq’s affairs and illegal attacks on its lands.”

On the other hand, Sheikh Tamim bin Hamad Al Thani, Emir of the State of Qatar, said that Iraq is qualified to play an active role in establishing security and stability in the region.

He stressed that “the unity of Iraq and the strengthening of state institutions are among the most important steps for stability,” calling on the international community to support Iraq to complete the rebuilding process.

Kuwaiti Prime Minister Sabah Khaled Al-Ahmad Al-Sabah also indicated that Iraq’s stability contributes to the stability of the region, noting that Iraq is on the verge of “a pivotal political stage in its history in the upcoming elections,” calling for “not to interfere in its internal affairs.”

As for Turkish Foreign Minister Mevlut Cavusoglu, he stated that “the region cannot be stable without Iraq’s stability,” adding, “The region suffers from divisions and terrorism threatens its countries,” expressing Turkey’s readiness “to participate in the reconstruction of Iraq.”

Saudi Foreign Minister Prince Faisal bin Farhan expressed his country’s support for Iraq’s stability and territorial integrity, stressing the need to “raise the level of coordination among the countries of the region.”

Prince Faisal bin Farhan praised “the role of the Iraqi government in controlling uncontrolled weapons,” noting that his country continues “to coordinate with its partners to confront extremism.”

Iranian Foreign Minister Hossein Amir Abdollahian supported “the security, stability and unity of Iraq,” explaining that the latter plays an important role in the region.

He continued, “We have provided support to Iraq in the fight against terrorism… We call for dialogue between the countries of the region away from foreign interference, and we also call for the exit of foreign forces from Iraq.”

UAE Energy Minister Suhail Al Mazrouei stressed, in his speech, that the Baghdad conference is an important step for Iraq’s return to its regional surroundings, calling to stand by Baghdad at this historical stage.