A member of Barzani’s party: Al-Maliki is the most likely to get the position of prime minister

A member of Barzani’s party: Al-Maliki is the most likely to get the position of prime minister 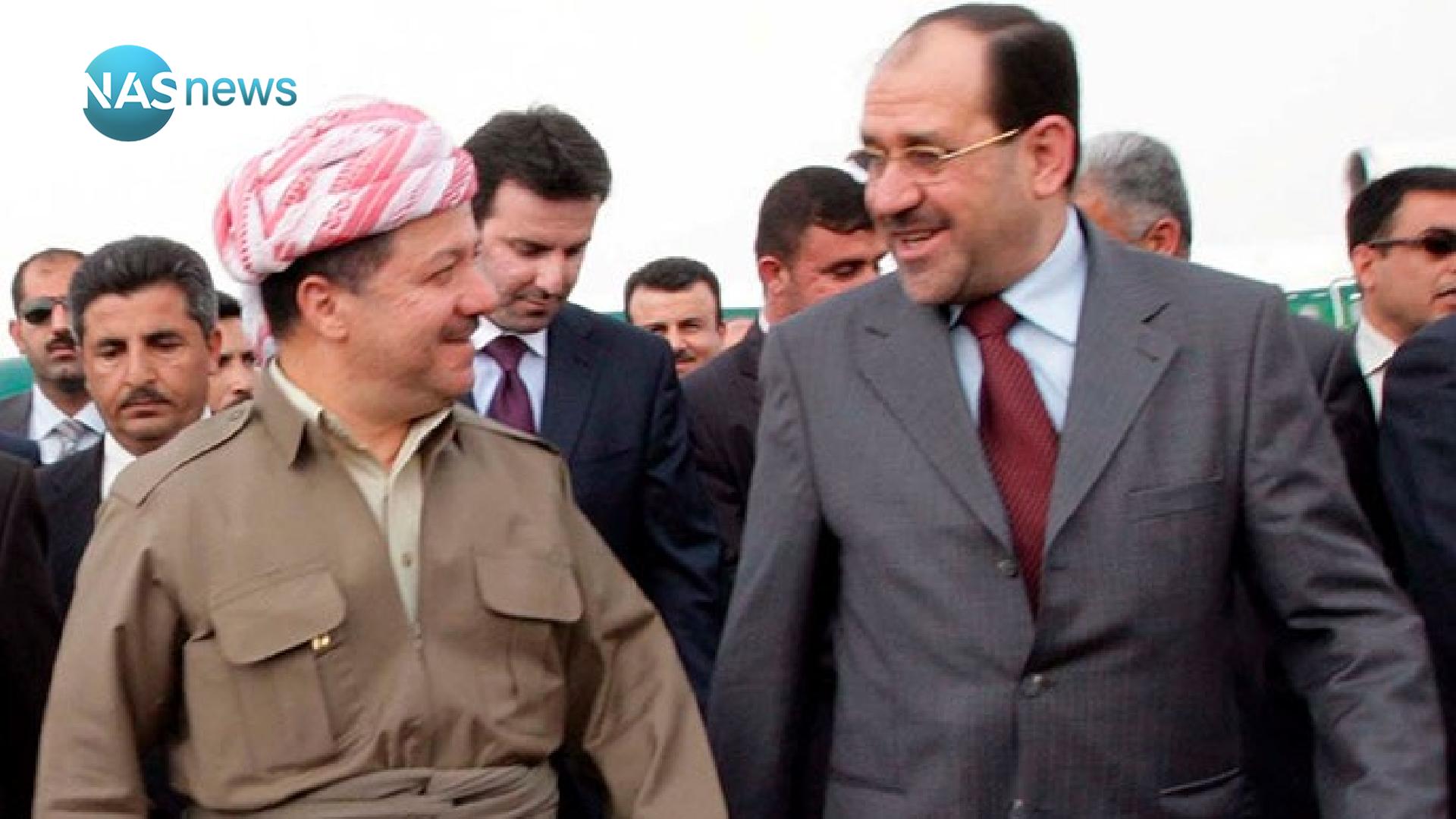 Ali al-Faili, a member of the Kurdistan Democratic Party led by Masoud Barzani, said that the leader of the State of Law coalition, Nuri al-Maliki, is the most likely to be prime minister in the next government, if the position of the Sadrist movement continues to boycott.

Al-Faili, in a televised interview with colleague Ahmed Mulla Talal, followed by “Nass” (August 24, 2021), confirmed that “Al-Maliki’s visit to Erbil scheduled for tomorrow and his meeting with Barzani was supposed to be a month ago, but it was postponed for health reasons.”

He added, “The relationship between al-Maliki and Barzani did not break even in the worst cases, and al-Maliki always maintained a ‘Saw’ hair’ in his relations.”

He continued, “Al-Maliki will meet the leaders of the Kurdistan Democratic Party in Erbil before the end of the week, and Barzani stands at the same distance from all political parties,” stressing that “the issue of Maliki’s support for the prime minister is an issue that is resolved within the Shiite house, and then talks are held with the rest of the parties of the components, but Al-Maliki is the most likely to win the position of prime minister, if there is no change in the position of the Sadrist movement in the last moments.”

Spokesman for the State of Law coalition, Bahaa El-Din Al-Nouri, said that his coalition has a large audience, when he spoke about the possibility of coalition leader Nuri al-Maliki getting a third term, which a member of the Sadrist movement confirmed “impossibility” to achieve.

The controversy escalated over Al-Maliki’s endeavor to invest in the expansion of the boycott base for the upcoming elections, and the inclusion of the Sadrist movement, in order to revive the “third term” project in conjunction with setting a date for Al-Maliki’s visit to Erbil in the coming hours, and making statements that were described as calm towards the Sadrist movement, and the American side alike. .

Al-Nouri said in an interview with colleague Ahmed Mulla Talal, followed by “Nass” (August 24, 2021) that “the issue of Al-Maliki’s third term will be determined according to the election results and participation rates, which will determine the features of the political process in the next stage,” without ruling out or denying the coalition’s endeavor. to achieve it.

He added, “We have no choice but to participate in the elections, and all of al-Maliki’s messages to the media are for cooperation and exchange of views between political parties,” expressing his coalition’s insistence on holding elections on the tenth of next October.

He continued, “Al-Maliki was able to bring investment and revive agriculture, and the production of the electricity sector during the period of al-Maliki reached from 6,000 to 18,000 megawatts, as well as services and the distribution of residential plots and job grades.”

For his part, a member of the Sadrist movement, Awad al-Awadi, responded to the idea of ​​al-Maliki’s third term by saying, “This is impossible,” describing al-Maliki’s first and second terms as the “worst.”

In this context, Jassim Muhammad Jaafar, a leader in the State of Law coalition led by Nuri al-Maliki, said that the risks of boycotting the upcoming elections are greater than the objections that the boycott parties are talking about, again calling for the Sadrist movement to return from the boycott decision.

Jaafar, in an interview with his colleague Adnan al-Tai, followed by “Nass” (August 24, 2021), said that “the State of Law coalition and other Shiite blocs are insisting on al-Sadr’s participation, because we fear obstacles that may face the formation of the next government, and no one is happy that the Sadrist movement does not participate in the elections.” “.

He added, “It seems that there are forces that want to go to an emergency government or a rescue government, and what some of the boycotters are asking for the necessity of removing all obstacles before holding the elections, means that they want the entire political class to be arrested and removed in order for another class to come. Election results are much less harmful than going into a dictatorship.”

He continued, “The path that Mr. Al-Sadr talked about at the beginning, by winning the premiership through elections, and without the need for alliances, is the first path and the democratic path.”

And he stated, “The Sadrists’ justifications differ from the justifications of the Octoberists, the coalition of Iyad Allawi, Saleh al-Mutlaq and the Communist Party. Each party has its reasons for taking this decision. As for the Sadrist movement, the accusations directed against the brothers in Sairoon in the files of raising the value of the dollar, hospital fires and the electricity crisis may have been felt. The brothers in the movement and His Eminence Al-Sadr declined to realize their ambitions to win a large number of seats, which prompted them to boycott and believe that the delay might restore ambitions to their previous era.

And he concluded, “The danger that confronts us from postponing or boycotting the elections is greater than the risks that we agree exist in terms of the possibility of fraud and others, but the postponement will not change the situation. Is it possible to collect uncontrolled weapons within 6 months for example?! This is unrealistic, we have to go to the elections and bring in a prime minister.” Strong supported by a strong mass in order to collect the escaped weapon.”

Al-Halfi said that “Al-Sadr’s boycott of the elections came out of his vision and the lack of solutions to the political crisis, as well as the view we all share of the forces of power that did not review their performance even with the launch of millions of protesters against corruption.”

“In these elections and under these circumstances, it is difficult for al-Sadr to reverse his decision,” he added.

Regarding the possibility that the boycotting parties would incur political losses if they insisted on their decision to boycott, Al-Halfi said, “It is not important for our parties to reap gains from the upcoming elections. Clinging to power and not allowing any change, what is the meaning of these elections, with the people remaining in protest, are they elections aimed at reproducing the forces of power and giving them false legitimacy? More dangerous than ballot box fraud.

The head of the State of Law Coalition, Secretary-General of the Islamic Dawa Party, Nuri al-Maliki, commented on Monday on the continued boycott of the Sadrist movement, Muqtada al-Sadr, for the elections, while he ruled out that the boycott would ignite the street, calling on the participating parties to reverse the boycott decision.

Al-Maliki responded during an interview with “Rudaw” network, which was followed by “Nas” (23 August 2021), to a question about al-Sadr’s boycott of the elections, and does it ignite the Iraqi street? He said, “I do not think that there is a correlation and commitment between al-Sadr’s desire to boycott and the Iraqi street, and I believe that no one has an interest in igniting the Iraqi street, nor in postponing or canceling the elections, because if they are postponed or canceled, they will not be held again. We are keen that the Iraqi street does not inflame and this He asked the political forces and everyone who bears arms to cooperate with the Supreme Security Committee in order to preserve the security aspect in order for Iraqis, candidates, blocs and voters to exercise their complete freedom without security pressures.

He pointed out that “what we hope and are working on is that the parties change their opinion about boycotting the elections, to be partners in the political process and all those who announced, not just the Sadrist movement, there is Dr. Iyad Allawi, Mr. Salih al-Mutlaq, the Communist Party and newly formed forces announced their boycott, and we wish them all that Resend this decision and be partners, so that no one says we were not partners in this political process.”