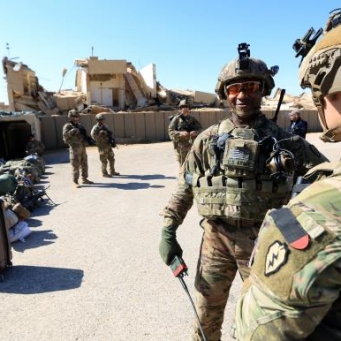 With the approach of the seventh anniversary of the formation of the international coalition against ISIS, which was established by the United States of America with more than 80 other countries to fight the organization in Iraq and Syria, in September 2014, attitudes in Iraq vary regarding the future presence of this coalition in the country. Armed forces and factions close to Iran have urged the rapid exit of foreign forces affiliated with the coalition, while others refuse to do so, fearing militias’ intrusion and control of state institutions.
Despite Baghdad and Washington’s talk about the withdrawal of the American combat forces affiliated with the coalition, which represent its most important pillars, from Iraq at the end of this year, parliamentarians and politicians rule out this, suggesting that the coalition forces, including the United States, will remain for a longer period, albeit with different tasks and new names. Since September 2014, 83 countries have committed themselves to fighting ISIS within the international coalition, and decided to confront the organization on various fronts, work to dismantle its networks, and confront its ambitions. The role of the international coalition in Iraq and Syria was not limited to the military aspect, as it supported, especially the United States, reconstruction efforts in Iraqi cities liberated from the control of the organization.

Iraqi general: The agreement to end the combat missions of the American forces does not mean the end of the role of the coalition

And on Saturday, a military committee led by the commander of the international coalition forces, General Paul Calvert, arrived in Baghdad, according to an Iraqi official statement issued by the office of the National Security Adviser, Qassem Al-Araji. The statement confirmed that Calvert discussed the outcomes of the strategic dialogue in Washington, in reference to the last round of this dialogue, which was held last July in the American capital. According to the statement, they discussed the security situation in Iraq, and the importance of the two sides continuing to fight ISIS and drying up its sources,” noting that “emphasis was placed on following up on the outcomes of the dialogue in Washington, especially with regard to the withdrawal of combat forces on December 31, 2021.”

On the other hand, an Iraqi general in the Joint Operations Command, who was part of the Iraqi negotiating team in the third round of dialogue between the United States and Iraq, which was held via a televised circuit in early April, said that “the role of the international coalition will not witness any change in its missions or the nature of its composition.” The countries inside Iraq, or even its spread within the bases in which it is currently located.” He explained, in an interview with Al-Araby Al-Jadeed, that “Iraq still needs the efforts of the coalition; Whether with air support or training and the provision of ammunition and necessary equipment. And the agreement to end the combat missions of the American forces does not mean the end of the role of the coalition.”

Iraq Markets, Workers of Iraq (AFP)
Arab Economy
Iraq: The economic offices are financing arms of the militias,
and added that “the Iraqi military and political leaders realize that the air strikes of the international coalition, and the intelligence information it provides, represent an important element in the war on the remnants of ISIS,” suggesting that “the continuation of ISIS.” The coalition worked in Iraq in its current form without change until the end of 2023, and the changes that may occur in this framework will, of course, be according to the data on the ground. Erbil seemed clearer than Baghdad in dealing with the file of the international coalition, as the Kurdistan Region’s Vice President for Military Affairs, Jaafar Sheikh Mustafa, confirmed, in statements recently reported by Kurdish media, that “the coalition forces will not leave Iraq and the Kurdistan region.”

The international coalition has provided about $5 billion in aid to the Iraqi forces and the Kurdish Peshmerga forces, as part of its campaign to eliminate the “ISIS” organization since 2014. Its planes have also carried out thousands of sorties and raids that killed the most important leaders of the organization and a large number of its members.

Al-Masoudi: The future of the alliance depends on the desire of the United States to dismantle it or keep it

Al-Masoudi pointed out that “the future of the coalition is linked to the United States’ desire to dismantle it or keep it, and its strategy in Iraq has not yet been clear, and therefore, Washington’s most important card in Iraq, the coalition, will continue.” He pointed out that “America has changed the title of its role within the international coalition, from fighting to training at the end of this year, but it will not leave its bases in Anbar Governorate (Ain al-Assad base) and Erbil (Harir base),” considering that the coalition’s exit from Iraq “will not be achieved.” In the short term, but we must continue to work to end the foreign military presence.” Al-Masoudi warned, at the same time, that “if a successful political project is not reached in the country, Iraq could face a very dangerous fate.”

Armed forces and factions close to Iran are putting pressure on the Iraqi government headed by Mustafa Al-Kazemi, to expedite the expulsion of foreign forces affiliated with the international coalition, from the country. The headquarters of the coalition and its columns are also exposed to frequent attacks.

And last month, the spokesman for the Commander-in-Chief of the Armed Forces, Major General Yahya Rasoul, said, “All that Iraq needs from the international coalition is for there to be a new relationship based on partnership in the issue of fighting terrorism, and supporting the Iraqi armed forces with training, equipping and arming, in addition to the intelligence effort. He pointed out that “terrorism still poses a threat, and it is widely present in areas in northeastern Syria.” He explained that “Iraq’s relationship with the international coalition will be based on the issue of increasing expertise, training, advice and armament,” stressing “there is no need for any foreign combat forces on the ground.”

Danbos: The international coalition will remain in areas that support its presence in the Kurdistan region and western Iraq

For his part, the former Iraqi parliament member, Adnan al-Danbous, indicated that there is a division over the future of the presence of the international coalition in Iraq. Pointing out, in an interview with Al-Araby Al-Jadeed, that “there are forces that want the coalition to leave and others that want it to stay.” He explained that “the international coalition will remain in areas that support its presence in the Kurdistan region and western Iraq,” noting that this coalition “is not in its best condition, and the scales now are not in its favor, but rather in the interest of other countries, including Iran.” He pointed out that “the escalation of ISIS terrorist operations in separate areas of the country indicates that the coalition does not want to intervene as required, because it has become undesirable by some Iraqi parties.”

Danbos stressed, “there is no fear of conflicts in the event of the departure of the international coalition,” considering that “it is fortunate for Iraq, that it is indivisible, and there is no suitable environment for coups, and there is no specific force that can control the situation in the country.” He expected that there would be “dialogues between Baghdad and Washington regarding the weapons and equipment of the forces that may withdraw from Iraq, and the extent to which the Iraqi forces benefit from them,” noting that “the Americans left advanced weapons upon their withdrawal from Afghanistan.”