The war of energy towers in Iraq.. from Karbala to Salah al-Din and Nineveh

The war of energy towers in Iraq.. from Karbala to Salah al-Din and Nineveh 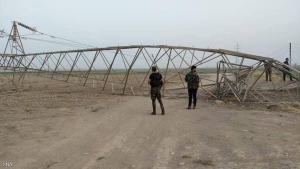 It seems that the war to sabotage Iraq is still going on, as the frequency of the destruction of power transmission towers increased and expanded to include Hodeidah governorates.

Today, Thursday, the Directorate of Electricity Transmission Networks in Salah al-Din Governorate announced the fall of two towers for transmitting power between Samarra and Tikrit.

The Director of Electricity Transmission Networks in Salah al-Din, Safaa Rashid, said that “two towers for transmitting power on the Samarra-Tikrit lines – (132K-V) fell, without it being clear what the direct cause caused the power outage in the two cities,” according to what was reported by the news agency. The Iraqi “conscious”.

He added, “The technical staff in the directorate continues their work to restore the two towers and deliver electricity to the two cities.”

Today, Thursday, the Maysan Electricity Distribution Department announced that one of its lines had been robbed, causing a power outage in the Majar al-Kabir district.

The department said in a statement, “The line feeding the Al-Majar Al-Kabeer Secondary Station was exposed to the theft of wires, which caused it to go out of work and stop the work of the station, and to not supply a number of neighborhoods and areas in Al-Majar Al-Kabir district with electricity.”

And it called on the security services to “the necessity of putting an end to such sabotage acts, regardless of the motives.”

Earlier on Thursday, the Iraqi Ministry of Electricity announced the expansion of “terrorist attacks” against the national system in a new targeting of power towers in Karbala Governorate, where it was subjected to a sabotage act by detonating explosive devices that damaged two power transmission towers in the province.

The terrorist attack that took place at dawn on Thursday included targeting the towers numbered (50-51) of the “Musayyib – north of Karbala” and “Musayyib – east of Karbala” lines, which led to the fall of the aforementioned towers and the power transmission lines being out of service.

And last Tuesday, the General Company for Northern Electricity Transmission announced, in a statement, the occurrence of new sabotage attacks.

The statement indicated that the transmission line, “Kirkuk-Bayji”, was subjected to sabotage by detonating explosive devices, which caused the fall of 7 towers, damages and cutting wires.

The number of detonated towers reached 27, which led to the suspension of many supply and feeding lines, and the weakness of the supply and stability of electric power in the northern region.