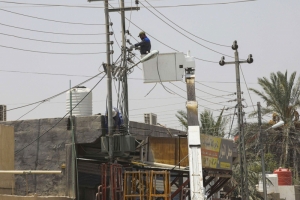 BAGHDAD – The continued targeting of electricity towers in Iraq deepens doubts about who benefits from this, despite the Iraqi authorities pointing the finger at ISIS, but it did not prevent some from not hesitating to raise suspicions about the Iranian-backed militias whose interests and the accounts of their operators often require shuffling. And the complexity of crises, as is the case now in the process of moving towards early elections.

On Monday, the Iraqi authorities announced the destruction of 3 electric power transmission towers in Nineveh Governorate, in the north of the country, after they were targeted with explosive devices by unknown assailants.

A statement by the Ministry of Electricity stated that the attack resulted in “the interruption of the Qayyarah power line – Mosul Dam, west of Nineveh Governorate, due to the fall of 3 towers due to their detonation with explosive devices.”

He added that “the northern electric power transmission system in the governorates of Nineveh, Kirkuk and Salah al-Din, was subjected to repeated attacks during the past week, which caused the fall of 20 towers, the suspension of several lines, and the weakness of the supply and stability of electrical energy.”

During the past weeks, Iraq has witnessed escalating attacks targeting electricity transmission towers and generating stations, in a country that produces between 19 and 21 thousand megawatts of electric power, while it needs more than 30 thousand, according to officials in the sector.

And the northern electric power transmission system in the governorates (Nineveh – Kirkuk – Salah al-Din) was exposed during the past week to the bombing of 20 towers, which led to the suspension of several lines and weakness in the supply and stability of electrical energy in the northern region.

The Iraqi Ministry of Interior said that attacks targeted 160 towers for transmitting electric power during 7 months in the country.

The Iraqi authorities accuse the terrorist organization ISIS of being behind the attacks, which coincide with the increasing demand for energy due to the high temperature.

ISIS claimed dozens of attacks on Iraq’s electricity grid and threatened other vital infrastructure, and Iraqi security forces said they had thwarted several other attempts.

On Sunday, the Joint Operations Command announced that more than 18 attacks targeting energy towers have been thwarted within two weeks, while the Ministry of Electricity indicated that some attacks on energy towers are systematic and others are indiscriminate.

Observers of the Iraqi affairs believe that the frequency of targeting electricity towers with the approach of the legislative elections may bear the hallmarks of political forces and armed factions close to Iran concerned with cutting off the road to the renewal of Iraqi Prime Minister Mustafa Al-Kazemi at the head of the government because of his lack of confidence in him as an ally of the United States.

On this basis, they do not rule out the work of these forces to create crises, which puts the Shiite militias linked to the Iranian Revolutionary Guards under the accusation of being behind the explosion of the electricity towers.

And Al-Kazemi had previously accused, last July, “fragile forces”, which he did not name, of working to ensure that his country would not reach self-sufficiency in electric energy and gas.

According to a statement issued by his office, Al-Kazemi said during his meeting with officials of the Ministry of Electricity in the capital, Baghdad, that “there are weak forces that are working to prevent Iraq from reaching self-sufficiency in energy and gas, and are trying to impede these efforts by every means.”

The issue of electricity is of exceptional importance to the Al-Kazemi government, who is striving to complete the transitional period he is leading with minimal damage, until the early parliamentary elections scheduled for next October, from which a new government will emerge.

The prime minister does not want to become a direct target of street anger, which is increasingly motivated to protest and demonstrate every summer with the renewed electricity crisis in the season when temperatures reach high levels, sometimes reaching 50 degrees Celsius.

Iraq has been suffering from the electricity shortage crisis for decades, as a result of successive wars and the instability of the security situation in the country, as well as the spread of corruption.

The chronic electricity crisis in Iraq and the inability of its successive governments for more than a decade and a half to overcome it, despite the country being one of the major oil producers and exporters in the world, has often represented an example of the failure to manage the state’s resources and rent them to serve the community and meet its basic needs, and a reflection of the extent to which corruption has permeated state institutions.

Late last year, a commission of inquiry set up by parliament reached a spending of eighty-one billion dollars on the electricity sector since 2005 without any significant improvement in service.

Last July, the Iraqi Ministry of Electricity announced an agreement with Iran to raise gas emissions and restore the electricity lines it had cut off from Iraqi areas, and indicated that the Ministry’s Undersecretary for Production Affairs, Adel Karim, discussed with the Chargé d’Affairs of the Iranian Embassy in Iraq, Moussa Alizadeh, the latest developments in relations between the two countries in the field of energy. and fuel.

In recent weeks, Iran has cut off electric power to areas in eastern Iraq and has reduced its gas emissions to power plants in its western neighbor, which it is demanding in debts amounting to 4 billion dollars for the value of the gas and electricity it supplies it with.

In recent weeks, the Iraqi authorities have resorted to using the army to confront the dilemma of repeated attacks on the electric power infrastructure, after a wave of targeting led to the cutting of electricity to hundreds of thousands of residents.

The Iraqi authorities allocated a rewarding financial reward for the cooperators for informing the forces deployed in the operation sectors of the army, the Federal Police, the Popular Mobilization, the local police and the Energy Police, about any case of targeting the electric towers.