In its weekly session, the Al-Kazemi government takes 8 new decisions

In its weekly session, the Al-Kazemi government takes 8 new decisions 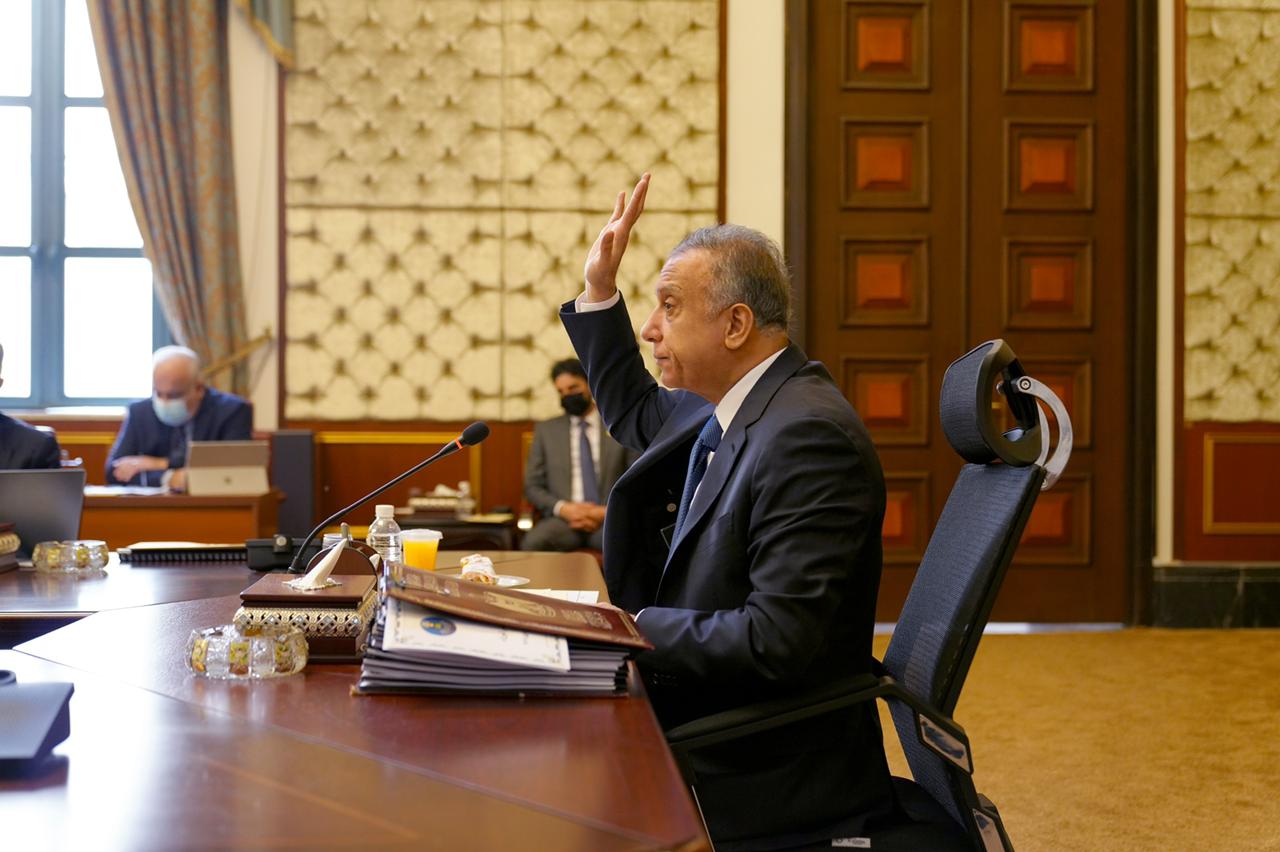 Shafaq News/ The media office of the Iraqi Prime Minister, Mustafa Al-Kazemi announced on Tuesday that the government has taken 8 new decisions during its regular session, noting that the session witnessed a discussion of developments in the country, as well as discussing topics on the agenda.

The session witnessed, according to a statement received by Shafaq News Agency, hosting the Chairman of the Independent High Electoral Commission, who presented the commission’s latest procedures in preparation for holding early elections on their scheduled date on October 10, 2021.

Al-Kazemi renewed his directives to all ministries to support the commission with everything it needs.

The session also witnessed a discussion of the reality of the national electrical system and the service provided to all citizens. The Undersecretary of the Ministry of Electricity in this regard was hosted, who in turn gave a comprehensive presentation on the status of the electricity system. The Council took the necessary decisions in this field. In order to ensure the smooth delivery of the electric energy produced, bypassing the beams, activating the related projects and accelerating their completion.

The Cabinet session witnessed a review of the epidemiological report on the Corona pandemic, and the developments in the work of the Committee to Strengthen Government Actions in the Fields of Health Awareness Prevention and Control; To limit the spread of the virus, and the efforts made by health institutions and medical staff in providing services to the infected, and limiting a larger outbreak of the disease, in addition to great efforts in vaccinating citizens, and achieving the required flow of vaccination outlets spread throughout Iraq.

After discussing the topics on the agenda, the Council of Ministers issued the following decisions:

First / Approval of the amendment of Cabinet Resolution (146 for the year 2021) to become as follows: – The Independent High Electoral Commission contracted by direct contracting with the Iraqi Media Network Press to print the final public and private voter register, candidates brochure, voter register poster, and complaints forms No. (110) and other non-sensitive publications from the requirements of the electoral process, with the exception of the instructions for implementing government contracts (2 of 2014), and the controls attached thereto.

Second/ – The Ministry of Oil employs a person from the families of the martyrs of the first or second degree for the fire incident at Imam Al-Hussein Hospital (peace be upon him), who holds an intermediate certificate or higher. Granting a financial aid to the families of the martyrs of Imam Hussein Hospital (peace be upon him), in Nasiriyah, with a minimum of ten million dinars, and a maximum of twenty-five million dinars, at a rate of five million dinars for each martyr, from the profitable companies in the Ministry of Oil.

Third / The Ministry of Finance allocates an amount of (3) billion dinars, from the emergency reserve, to the Football National Authority to cover the expenses of contracting with the Dutch coach (Dick Advocaat) and his assistant owners, and the establishment of training camps based on the provisions of Article (5) of the Federal General Budget Law for the fiscal year 2021.

Fifth/ Forming a committee headed by the Undersecretary of the Ministry of Foreign Affairs, Mr. Nizar Al-Khairallah, and with the membership of representatives from the ministries of Justice, Interior, Transportation, Immigration, and the Iraqi National Intelligence Service. A maximum of two working weeks.

Sixth / Approval of authorizing the Ministry of Interior to contract the authority to implement an integrated electronic traffic system in the (BOT) manner, with an exception to the instructions for implementing government contracts (2 of 2014) and the controls attached to them, and from the instructions for implementing the Federal General Budget Law, taking into account the provisions of Article (43) From the Traffic Law (8 of 2019).

Seventh/- Determining the share of Iraq’s contribution to the shares in the Asian Investment Bank to a maximum of (250) shares of the capital, of which (50) shares are paid and equal to 20%, and (200) shares equivalent to (80%) remain unpaid and when summons. – Authorizing the Ministry of Foreign Affairs to sign the application for the accession of the Republic of Iraq to the agreement of the Asian Investment Bank for Infrastructure. – Paying Iraq’s contribution to the capital of the Asian Bank within the allocations of the general federal budget to the Ministry of Finance for the year 2021, and by making transfers.

Eighth / Approval of the settlement by writing off the debt of the General Company for Maritime Transport owed by Alia Transport and Trading Company to be liquidated, amounting to (2060955.223) Jordanian dinars, only two million and sixty thousand nine hundred and fifty-five Jordanian dinars, and two hundred and twenty-three fils, according to the provisions of Article (46). From the amended Federal Financial Management Law (6 of 2019), in exchange for writing off the debt of Alia Company owed by the Iraqi Airways Company, the General Company for the Transport of Delegations and Passengers, and the Shadow Company for Transporting Persons and Passengers.