Curbing inflation or a means of pressure on Baghdad? .. That is why the Kurds of Iraq are heading to establish a central bank

Curbing inflation or a means of pressure on Baghdad? .. That is why the Kurds of Iraq are heading to establish a central bank 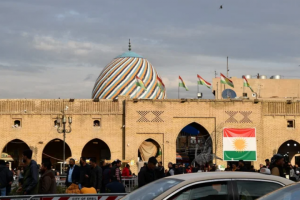 BAGHDAD – Oil, agricultural and tourism resources dominate the independent economy in the Kurdistan region of Iraq, from which the salaries of about 6 million and 33 thousand people are paid, including 1.2 million government employees.

Establishing an independent central bank
In a step that the region sees as positive and contributes to the payment of monthly financial expenses and other dues, there is a serious intention to start establishing a central bank in Erbil independent of the Central Bank of Iraq, a step considered by banking experts in Baghdad as a means of political pressure exerted by the region towards the center

On this subject, the economic advisor to the Parliament of the Region, Dr. Arshad Taha, reveals that there are understandings between Erbil and Baghdad to go to establish a central bank similar to the one in the federal government.

Speaking to Al Jazeera Net, Taha said, “The region was exposed after 2014 to suffocating economic and financial crises, due to the central government’s failure to pay the region’s dues from public budgets during the years 2015-2020, in addition to the drop in global crude oil prices, the war against the Islamic State, and asylum And the displacement of more than two million people from Iraq’s governorates to the region, all of which undermined the Kurdish ability to provide cash to pay salaries, expenses and other financial dues.

He points out that loans and financial obligations have accumulated to reach about 30 billion dollars, adding that Erbil intends to establish a bank similar to the Central Bank of Iraq in coordination with Baghdad, considering that “the establishment of this bank in Erbil will be affiliated with the Central Bank in Baghdad, due to the inability of local Kurdish banks to Providing cash flow.

Perhaps one of the most important aspects of the work of central banks in any country in the world is the issuance of a currency. However, Taha denied the existence of a current intention by the region to issue a Kurdish currency because the region is not an independent entity from Iraq.

The Central Bank of Iraq relies on branches in all Iraqi governorates – including the provinces of the region – and operates in accordance with the monetary policy of Iraq and sets plans for financial and economic reform and draws effective development plans.

Controlling inflation
The Iraqi banking expert, Abdul-Hussein Al-Mandhari says, “The Central Bank of Iraq is responsible for the monetary policy of Iraq, and it is not permissible to establish other central banks within the country, because the matter is a sovereign affair.”

Al-Mandhari wondered – during his speech to Al-Jazeera Net – if Erbil establishes a central bank, will it guarantee that it will not grant banking interests more than the current interest, which the Central Bank of Iraq deliberately uses in discount operations and cash withdrawals from other provinces.

He stressed that this step would confuse the work of the Central Bank of Iraq in the issues of the open market and the control of inflation, and the banking specialist expressed his fear that the Central Bank in Erbil – if established – would grant work licenses to banks with classification and indicators of money laundering and others.

As a means of pressure, and
there is difficulty in Erbil implementing the decision to establish an independent bank, as it is linked to many factors, according to the expert in financial management, Dr. Ali Al-Nusaifi, the most prominent of which are the issuance of the currency, its centralization, its sources of revenue and obligations with international financial and monetary institutions such as the International Monetary Fund and the World Bank, expecting that the two financial institutions will not allow The two countries, with this decision, come from the Kurdistan region of Iraq

The financial specialist sees this step as a means of political pressure exerted by Erbil against Baghdad; It is unlikely that the move would have any impact on the regional and international environment.

Al-Nusaifi also pointed out that this decision will cause confusion and financial and societal turmoil in the region if it proceeds with this lost monetary risk, similar to his political adventure in holding the referendum on secession from Iraq in 2017.

According to labor union statistics in the Kurdistan region of Iraq, more than 200,000 workers have lost their jobs, especially in the private sector, in addition to more than 30,000 workers have stopped working in the markets due to the economic crisis afflicting the country and the measures taken to prevent the spread of the Corona virus. Several areas in the region also witness demonstrations and sit-ins from time to time, to demand public services, employment and the payment of monthly salaries.