Al-Kadhimi: Iraq no longer needs the presence of US forces

Al-Kadhimi: Iraq no longer needs the presence of US forces 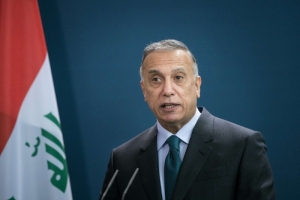 BAGHDAD – The Iraqi Prime Minister announced that his country no longer needs American combat forces to fight the Islamic State, indicating that the Iraqi security forces and army are capable of defending the country.

The Iraqi prime minister stated that the official time frame for the redeployment of US forces will depend on the outcome of talks with US officials, as it relates to the readiness of the Iraqi forces, which showed that they are able to carry out independent missions against the Islamic State, according to what was quoted by the Associated Press.

Observers believe that Al-Kazemi’s announcement comes in the context of messages of reassurance to the United States about the ability of the Iraqi security forces, which are supported by the United States in the face of ISIS, especially with the increasing speculation about the possibility of announcing a timetable for the withdrawal of the international coalition forces, which is the main demand of the pro-Iranian militias in Iraq. .

Al-Kazemi said, “What we want from the American presence in Iraq is to support our forces in training, developing their efficiency and capabilities, and in security cooperation.”

Al-Kazemi’s comments come before he heads to the United States, where he is scheduled to meet President Joe Biden on Monday in a fourth round of strategic talks.

It is assumed that the strategic dialogue between Baghdad and Washington will lead to setting a timetable for the withdrawal of the international coalition, and there are still about 3,500 foreign soldiers on Iraqi soil, including 2,500 Americans, but the completion of the withdrawal process may take years.

On the seventh of last April, Baghdad announced an agreement with Washington to transform the mission of the international coalition forces from combat to training and advisory. Later, Baghdad announced the formation of a committee comprising leaders of the Ministry of Defense to negotiate with the American side to set the mechanisms and timelines for foreign military withdrawal.

In January 2020, the Iraqi parliament voted in favor of a resolution demanding the removal of foreign forces, including the United States, from the country, following the killing of the Iranian Quds Force commander Qassem Soleimani and the Chief of Staff of the Popular Mobilization Forces, Abu Mahdi Al-Muhandis, in a US air strike near Baghdad International Airport.

The file of ending the US presence in Iraq has always been the subject of wide political debates in Iraq, where officials believe that the exit of US forces will open the way for Iran and its arms to increase its influence, at a time when the Iraqi government is facing pressure from Tehran and its proxies demanding the removal of foreign forces from Iraq.