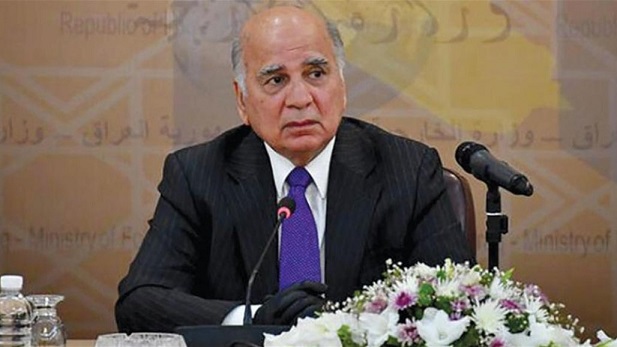 Today, Friday, Foreign Minister Fouad Hussein arrived at the US State Department building in preparation for the start of the latest strategic dialogue round.

The ministry’s spokesman, Ahmed Al-Sahhaf, said in a statement that “Foreign Minister Fouad Hussein arrived at the US State Department building,” noting that this was “to start the fourth and final strategic dialogue round.”

In his speech during the fourth round of the strategic dialogue between Baghdad and Washington, the Minister of Foreign Affairs said, “This round comes as a continuation of the previous rounds and provides a clear vision on the characterization of the partnership relationship between Iraq and the United States,” calling on representatives of the sessions in various sectors to exert more efforts to reach fruitful results that lead to achieving common goals of both countries.

Hussein added, “The government of Iraq appreciates the efforts made by the US government to rehabilitate and train the Iraqi security forces, equip them and provide advice in the intelligence field, in order to reach the required readiness in relying on their own capabilities,” stressing “the importance of sustaining the momentum and international efforts led by the United States of America through The international coalition, as it constitutes, in parallel with the military efforts, an inevitable victory over the ideology of injustice and hatred that terrorism is trying to spread in societies.

The Minister of Foreign Affairs indicated that “our security forces still need the programs provided by the United States of America related to training, arming, equipping, and capacity building,” thanking “the countries that supported Iraq’s request to strengthen procedures for monitoring elections and ensuring their integrity, and the efforts of the United States in particular for its initiatives in this regard.”

Hussein explained that “many memoranda of understanding were concluded in various sectors during the previous rounds of dialogue that support our endeavors to confirm the common interests between the two sides,” noting that “the memoranda of understanding confirm Iraq’s progress in strengthening its economic independence and achieving regional and international partnerships in a balanced manner, the latest of which was an initiative The tripartite summit, as well as efforts to link Iraq to the regional energy system across the Gulf states.

Hussein stressed that “the Iraqi government is completing its efforts to lift the injustice that befell our society with multiple components of the injustice and darkness of terrorism,” explaining that “the Iraqi government has pursued a path to support security and stability internally and at the regional level by relying on dialogue and taking joint opportunities to achieve this.”

The minister noted “full respect for Iraq’s sovereignty to ensure its internal stability and not to be drawn into regional conflicts.”

The Minister of Foreign Affairs said, “Confronting Corona requires completing cooperation between the ministries of health in both countries to provide rapid response requirements to ward off the risks of this pandemic. We hope to reach agreements for support and cooperation in the field of health during the side session that will be held between the two sides.”

Hussein reiterated Iraq’s affirmation and commitment to strengthening its strategic partnership with the United States of America as a key partner in the international coalition to combat ISIS. fully with the Iraqi government.

The foreign minister concluded: “We are confident in our ability to move together in setting the course of this relationship on the path of well-being and prosperity sought by the people of our two countries and the great historical responsibility entrusted to us.”