Al-Kazemi: I was exposed to 3 assassination attempts and I am not afraid

Al-Kazemi: I was exposed to 3 assassination attempts and I am not afraid 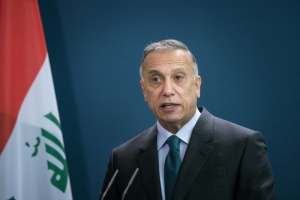 Baghdad – Iraqi Prime Minister Mustafa Al-Kazemi revealed, on Sunday, that he was subjected to three failed assassination attempts, stressing that his government is determined to confront the attempts of non-state groups to penetrate security fortresses and that he will discuss in Washington withdrawing its combat forces.

Al-Kazemi said, in an interview with “Al-Hadath” TV (owned by Saudi Arabia), “I was subjected to three failed assassination attempts, and I am not worried or afraid.”

He did not give details about the locations and dates of these attempts, nor the parties responsible for them.

He stressed that he will continue to perform his duties according to the program he has set to run the country.

Since May 2020, the Al-Kazemi government has assumed power, succeeding the government of Adel Abdul-Mahdi, who resigned in late 2019, under the weight of popular protests accusing the ruling political elite of corruption, incompetence and dependency on the outside.

Al-Kazemi stressed that the “non-state” groups who do not want the good of Iraq, in reference to the militias that seek to turn it into an arena for conflict, “my message to them: that you have no choice but the state and that absurd acts do not serve anyone, they do not serve Iraq, nor the countries of the region, nor the future of our children.” .

He stressed that these groups do not bear a sense of responsibility, but rather the absurd spirit that puts Iraq’s future at risk.

He pointed out that there is coordination with the Kurdistan Regional Government, “and as there are some abuses in Baghdad and the regions of Iraq, there are abuses in the region, and these groups are trying to penetrate all the security fortresses, but in return there is good work between Baghdad and Erbil and excellent coordination, and we succeeded in arresting groups in the region and groups in Baghdad.” .

He continued, “We need to stay away from sectarianism and sectarianism to build the state and national loyalty,” noting that he chose “the policy of silence, not clashing in front of the transgressions of those who believe in the policy of non-state, and dialogue is the solution.”

The Iraqi Prime Minister went on to say that “non-state groups” are behind the targeting of diplomatic missions in Iraq, stressing, “We will protect all Iraqi state institutions, and whoever tries to transgress the concept of the state will be outside the framework of the state.”

Regarding his visit to Washington and his meeting with US President Joe Biden on the 26th of this month, Al-Kazemi indicated that it “comes to organize relations and withdraw combat forces,” adding, “We hope that we will not be an arena for the conflict of the United States and Iran.”

He pointed out that his visit aims to “regulate Iraqi-American relations and the withdrawal of combat forces.” He added that the United States is an important country and a superpower that helped Iraq in the war against ISIS, and this visit will not only concern the military aspect, but also the economic, cultural, educational aspects and everything that is in the interest of the Iraqi people and the future of relations between the two countries

And regarding direct secret talks between Iran and the United States, hosted by Iraq months ago, Al-Kazemi said that “the US-Iranian dialogue will have repercussions on the entire region.”

Iraqis complain that their country has become one of the arenas for settling scores between the United States and Iran, who are linked by controversial files, including Tehran’s nuclear and missile programs and the two countries’ foreign policy towards the Middle East.

Al-Kadhimi stressed, “We are working to help find a mechanism for dialogue between Iran and the United States to resolve all points of contention between the two countries.

He stressed, “It is not in anyone’s interest that there be a conflict in Iraq, as it will have very large regional repercussions, and for this we are working very hard to calm and encourage dialogue. We understand Iran’s concerns on some issues, as well as the concerns of the United States, and we are working to find mechanisms for action and consensus between The two states.”

He explained, “We speak with the Iranians frankly, that Iraq is in dire need of stability, and we need state-to-state relations with respect for the privacy of each country, and the Iranians are working hard to help us build stability and call for calm in Iraq. Iran is a neighbor of Iraq, and we need continuous dialogue “.

He said, “We will visit Tehran, and we have many pending files, and there are common points and interpretations that need dialogue and solutions.” He pointed out that if the US-Iranian dialogue reached an agreement, its repercussions would be not only on Iraq but on the region in general, and we hope that these negotiations will take place and succeed in order to put an end to this long conflict.

And regarding the early parliamentary elections, on October 10, Al-Kazemi said, “The most important person who thinks that I am seeking to postpone the elections to go to an emergency government, we will work hard to hold the elections on time,” noting that he is optimistic about the elections and hopes for good participation that restores consideration to the parliamentary system.

These elections are one of the demands of popular protests that began in Iraq in October 2019.

And on Thursday, the leader of the Sadrist movement, Muqtada al-Sadr, announced his boycott of these elections, considering this “to preserve what is left of the homeland, and to save the homeland that the corrupt have burned and are still burning.”

Regarding this boycott, Al-Kazemi said, “We understand Al-Sadr’s decision to withdraw from the elections, and we call on him to return from it,” adding, “We ask the Iraqis to contribute to reform through the elections.”

He pointed out that the political system in Iraq needs to be reviewed completely, as well as the constitution, and said, “We need real, correct mechanisms to serve the citizen…the provincial councils were a good step, but the political conflict spoiled the work of these councils.”

He noted that corruption and the struggle for influence spoiled the process of providing services to citizens, and that is why the parties participating in the elections should think about providing public service first instead of looking for prestige and political influence.

Regarding the confessions published by the Iraqi authorities two days ago to one of those accused of assassinating the writer and security expert Hisham Al-Hashemi, Al-Kazemi said, “We revealed all the participants in the operation, but some of them fled outside Iraq, and one of the criminals was arrested.”

He continued, “The criminal who was arrested is an employee of the Ministry of Interior (an officer with the rank of first lieutenant), but he belongs to (undisclosed) outlaw groups, and the judiciary will say his decisive word.”

In July 2020, gunmen assassinated al-Hashemi near his home, east of the capital, Baghdad, amid local and international condemnation, and no party claimed this crime.