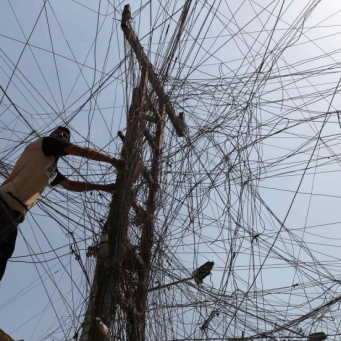 On Saturday, Iraqi Prime Minister Mustafa Al-Kadhimi called on the Joint Operations Command to strengthen the protection of electric power transmission towers, which are being targeted by terrorist groups and saboteurs.

During the first meeting of the emergency crisis cell to address the electricity situation in the country, the Prime Minister instructed the Ministry of Finance and other ministries to provide all facilities for urgent treatment of the problems that the Ministry of Electricity suffers from, and to submit an emergency action plan for the treatments so as not to affect the supply of citizens with electricity.

During the meeting, they discussed the measures that were taken to prevent a recurrence of what happened, provide electric power to citizens, find quick solutions to add new units to increase production and solve the problems of low voltage levels in the southern region, and the need to equip capacity across the interconnection lines with the Iranian side as a quick solution for this summer.

It was also discussed that the public companies for the transmission of electric power should conduct a continuous thermal examination of the high-pressure lines and transfer the responsibility of the transmission networks within the generation stations from the production companies to the transmission companies, each according to its region, and the obligation of distribution departments in the governorates to improve the power factor of their networks, and the German company Siemens to adjust the frequency values for its operating units.

At dawn on Friday, Iraq witnessed a complete shutdown of electric power in the country due to a technical malfunction and acts of sabotage that affected electric power transmission towers by terrorist groups and saboteurs.

The Iraqi government immediately formed a higher ministerial committee from the ministries of electricity, finance, interior, oil and provincial councils headed by Prime Minister Mustafa Al-Kazemi to follow up on the repercussions of this crisis, and it dismissed and punished senior officials in the Ministry of Electricity against the background of this crisis.

However, this did not end the anger of the Iraqi street over the electricity crisis, as Iraqis demonstrated Saturday in the governorates of Dhi Qar and Diyala and others against the deteriorating level of electrical energy in the country and demanded accountability for the negligent and those involved in corruption.

Eyewitnesses said that large numbers of demonstrators gathered in Al-Haboubi Square in the center of Nasiriyah city in Dhi Qar governorate (375 km south of Baghdad) to protest against the power outage.

The demonstrators demanded that the Iraqi government resolve the electricity file and refer the negligent and the corrupt to the Iraqi judiciary.

Iraq has been complaining since 2003 until now about the problems of low levels of production and distribution of electric power despite spending billions of dollars on this sector due to the war against terrorism and the expansion of financial and administrative corruption in successive governments.