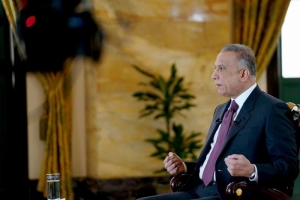 Baghdad – Iraqi Prime Minister Mustafa Al-Kazemi on Thursday blamed the corruption that prevailed during the governments led by former Prime Minister Nuri al-Maliki for the disasters that Iraq experienced, pledging to move forward in the fight against corruption even if it cost him to topple his government.

Al-Kadhimi said, “The fall of Mosul (in the hands of ISIS in the summer of 2014) was caused by corruption, nepotism and mismanagement as well, and many issues, even in the issue of electricity and other sectors, we find that the reason is corruption.”

He stressed in an interview with the state-owned Al-Iraqiya channel, and his media office published its content, that “fighting corruption is a major challenge in Iraq.”

Last August, Al-Kazemi formed a special committee to investigate major corruption files, and assigned the tasks of executing arrest orders to a special force in the prime minister’s office.

The assets and properties of 9 officials, including Al-Maliki’s son-in-law, were also frozen and the property of 9 officials was frozen due to the failure to pay debts owed to the state, in a move that observers considered the beginning of a wide battle with corruption, but after that, the steps to confront the corrupt remained slow due to the influence of the militias loyal to Iran.

Al-Maliki responded that he considered the anti-corruption committee formed by Al-Kazemi “contrary to the constitution.” He said he should “support institutions concerned with fighting corruption” instead of announcing a new commission.

The fight against corruption was at the top of the demands of massive protests in Iraq for a whole year, starting in October 2019, when the government of former Prime Minister Adel Abdul-Mahdi, in partnership with Iraqi militias affiliated with Iran, was involved in killing hundreds of demonstrators and wounding thousands of others in order to protect the corrupt religious party system in the country.

Iraq is among the most corrupt countries in the world, according to the Transparency International index over the past years.

On the 23rd of last May, Iraqi President Barham Salih said in a televised speech that $150 billion had been smuggled abroad from corruption deals since 2003.

Al-Kazemi vowed to continue the fight against corruption, saying, “Even if the government is threatened, we will not stop anti-corruption measures, and we are ready to sacrifice everything.”

Since its formation, Al-Kazemi’s government has made extensive administrative changes in state institutions, including the security services and the army, in an effort to remove incompetent officials or those suspected of involvement in corruption.

During the formation of his government, Al-Kazemi pledged to fight widespread corruption in the joints of the state, which made him subject to a fierce campaign by influential parties and blocs backed by Iran.

Corruption was a major reason for the failure of successive Iraqi governments to improve basic public services such as education, electricity, drinking water, the health sector, and others.

Iraq is facing a large spread of corruption, as the Parliamentary Integrity Committee confirmed last January that the volume of smuggled funds outside Iraq is estimated at 350 trillion dinars (239.7 billion dollars), a number that has exceeded the country’s budget for more than two years, stressing the existence of political pressures to obstruct the fight against corruption.

Committee member Taha Al-Dafia said that “the money that has been smuggled outside Iraq during the past years has reached 350 trillion dinars, all through fake receipts.”

He added that a lot of commissions were paid to some officials for the purpose of facilitating smuggling operations.

Earlier last year, the former member of the Parliament’s Finance Committee, Rahim Al-Daraji, estimated the value of the looted funds in Iraq at about 450 billion dollars.

Al-Kazemi’s plans do not stop at fighting corruption, although it is a difficult task for a government without a clear political belt.

Al-Kazemi is betting on the elections scheduled for next October in order to ascend a supportive bloc of deputies not linked to sectarian agendas.

“We do not want to compliment any party, and we decided to contain everyone and extinguish the fires to provide a security environment for the upcoming elections, because elections are the demand of the people, the reference, popular forces and parties,” the Iraqi prime minister said in his interview on Thursday.

He reiterated his commitment not to run in the elections as a candidate, explaining, “It is a decision taken from the first moment to take office and I do not have any party, and I support all parties equally and do not differentiate between one party and another.”