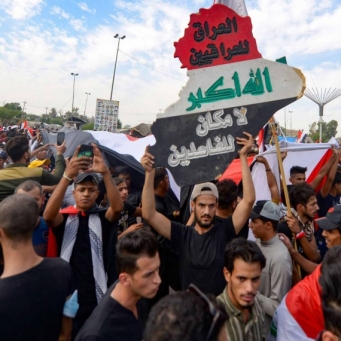 On Monday, the Iraqi authorities announced the issuance of fifty-three arrest warrants and summonses against current and former high-ranking officials, including parliamentarians, ministers and governors, on corruption charges.

This measure came as part of what the authorities say is a campaign to curb widespread corruption in the joints of the state, but political and media activists question its feasibility, stressing that it includes only certain levels of officials, and does not affect the large “whales” of influential people, leaders of ruling parties, armed militias, etc. Associated with them lobbies.

Iraq is considered among the most corrupt countries in the world, according to Transparency International’s indicators over the past years.

Those familiar with the Iraqi issue affirm the existence of a state of awareness of the danger of the phenomenon of corruption on the cohesion and continuity of the state, which is reflected at least by the speech of senior state officials such as President Barham Salih, who recently compared corruption and terrorism, but they consider that the Iraqi state and its institutions are in a state of weakness that does not allow By besieging and uprooting the phenomenon, as some corrupt parties have become so powerful and empowered that state agencies are contesting their authorities, and this applies to armed militias.

The Iraqi Integrity Commission, an official body concerned with prosecuting corruption, said in a statement that the judiciary has issued, since last April, 8 arrest warrants and 45 summonses for investigation against senior officials against the background of cases and files related to corruption.

She explained that those orders included 3 members of the House of Representatives (Parliament) for the current session, as well as a member from previous sessions.

And last August, Iraqi Prime Minister Mustafa Al-Kazemi formed a special committee to investigate major corruption files, and assigned the tasks of executing arrest orders to a special force headed by the ministers.

Last week, the Federal Supreme Court of Iraq introduced an amendment to the immunity system granted to members of Parliament, in a legal procedure that accompanied a broader momentum of demanding reform and fighting corruption, which the Parliament has often considered one of its focal points through the control of political forces represented under its dome in the selection of government officials from ministers. and administrators and use them to loot state funds and illegally seize its public deals.

The court, which is the highest judicial authority in Iraq, abolished the immunity granted to members of Parliament against flagrant felonies, misdemeanors or infractions. Arrest and summons order against current and former high-ranking officials, including MPs, ministers and governors

The Iraqi parliament’s deputies enjoyed absolute immunity from all crimes and charges against them, and no judicial or security body had the right to arrest them or hold them accountable until the parliament voted to lift their immunity.

And a statement of the Federal Court said that “obtaining Parliament’s approval to lift the immunity of a member in only one case is the issuance of an arrest warrant for a crime of the type of unaccounted for crimes.”

He added that “other than that, there is no immunity for members of Parliament, and legal measures can be taken against them directly if any of them are accused of a flagrant felony, a misdemeanor or a violation.”

Unwitnessed crimes are crimes that are not based on compelling factual evidence, and are reported by informants.

Over the past years, hundreds of lawsuits have been filed against members of Parliament, on charges related to financial and administrative corruption, and others related to forgery of certificates, and abuse of powers, but the judiciary was unable to hold them accountable because of their parliamentary immunity.

During the popular protests that have repeatedly exploded in the country for years due to the spread of corruption and the deteriorating conditions of the country, parliamentarians have been a main target of the protesters, who accuse them of fraud and corruption and say that they only represent themselves and the interests of their parties.

Iraqi President Barham Salih said on Sunday that the oil revenues that have come to his country since 2003 are estimated at about a thousand billion dollars, most of which were wasted and about 150 billion dollars were smuggled abroad.

This came during his presentation of a new draft law to Parliament aimed at combating corruption, recovering public funds that were lost as a result of embezzlement, and prosecuting those responsible.

The draft law targets individuals who have held important positions in public institutions and administrations since 2004, as well as those close to it, with the aim of recovering assets they have collected through corruption, whether they are located in Iraq or outside it.