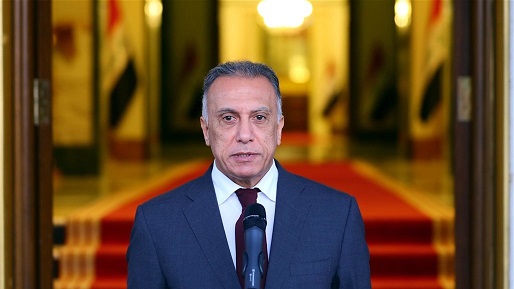 Prime Minister Mustafa Al-Kazemi, Thursday, delivered a televised speech on the occasion of the blessed Eid Al-Fitr, during which he talked about what his government had accomplished since its formation, revealing that he was not running for early elections.

Al-Kazemi said that the government fulfilled its pledge to work on holding early, fair and independent elections that would contribute to fair representation for all.

Al-Kazemi announced during his speech that he would not run for early elections, saying: We fulfilled our commitment to our people by declaring not to participate in the elections or to support any party or party at the expense of the other.

He added, “We have set October 10 this year as a deadline for these early elections, and my government has provided all support for the success of the elections.”

The Prime Minister touched on many files that included the economic and security aspects, especially those related to the foreign policy of Iraq.

He stressed that the country will not be a backyard for any country, and that Iraq is a source of peace for all countries in the region, and we are proud of our relationship with all countries such as Jordan, Egypt, Turkey, Saudi Arabia and Iran, and that the Pope’s visit is a positive reflection of the new foreign policy.

In addition to the government’s success in foreign economic policies, including the opening of the Arar border crossing with Saudi Arabia, the conclusion of trade agreements with Jordan, the implementation of the Chinese agreement, and the extension of a railway with Iran to the Shalamjah border crossing.