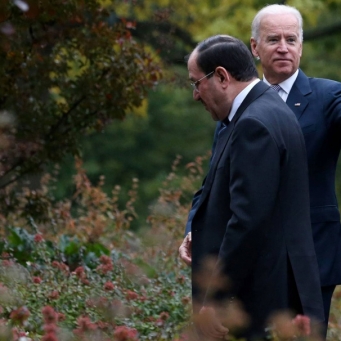 Former Iraqi Prime Minister Nuri al-Maliki demonstrated his ambition to rule Iraq again despite the severe decline in his popularity due to the extremely negative outcome of his two states at the head of government between 2006 and 2014, during which the Iraqi state witnessed a significant decline at various economic, social and security levels, during which corruption was rampant. Unprecedented, hundreds of billions of oil revenues were wasted in them, and they ended in disaster, with ISIS controlling about a third of the country.

Al-Maliki, the leader of the Islamic Dawa Party, who lost the premiership, the most important executive position in Iraq following the 2014 elections, attacked the government of Prime Minister Mustafa Al-Kazemi and presented himself as the country’s future leader.

He also presented himself as a “friend” of US President Joe Biden, offering his mediation between Tehran and Washington over differences over the nuclear deal and the severe economic sanctions imposed on Iran by the United States.

Observers of the Iraqi issue ruled out that Maliki, whose political status had declined locally, would have any ability to participate in any way in resolving an intractable international issue from the level of differences between Iran and the international community, considering that what he declared was nothing more than a manifestation of his involvement in the early “election campaign” that was opened by a number One of his major opponents and rivals from within the Shiite political house, in preparation for the early parliamentary elections scheduled for next October.

Although these elections were approved by the unprecedented popular uprising that Iraq witnessed starting in October 2019, and in which slogans were raised against the political class that had ruled the country since 2003 and calling for change, the top leaders of the Shiite parties and movements leading for that experience of rule have recently begun preparing for the election occasion. Important and began to market themselves as extraordinary candidates to win.

Shiite cleric Moqtada al-Sadr said that he would run in the October elections with the aim of achieving an overwhelming victory in them, while Ammar al-Hakim, leader of the Wisdom Movement that had split from the Islamic Supreme Council, began to re-promote his project, which he says is a “national” inclusive and cross-sectarian.

Not far from that early marketing process, al-Maliki told Al-Ghadeer satellite channel, affiliated with the Badr Militia, led by Hadi al-Amiri, that he is qualified to take over the prime minister position again and that he will “fight” if he gets the position “in the most difficult circumstances to help Iraq.”

Al-Maliki’s words are an attempt to catch up with the campaign launched by his rival Muqtada al-Sadr, who aspires to rule Iraq through the upcoming parliamentary elections.

He also attacked Prime Minister Mustafa Al-Kazemi, saying that his government is unconstitutional, deeply defective and inconsistent with political forces.

He also criticized the legislation of a new electoral law, saying that “it should not have been legislated,” considering that holding elections in the current circumstances would result in “a parliament inconsistent with the disappearance of the large blocs capable of making positions,” referring to the major parties that the street demands to remove them from power for their failure In managing the country’s affairs for the past seventeen years.

The leader of the Dawa Party did not neglect the statements of his rival, Muqtada al-Sadr, in which he expected his ability to achieve a great victory in the upcoming elections that would allow him to form the government that will emerge from it.

Without referring to the name of Al-Sadr, with which you have gathered tense relations, he said that he advises “everyone to leave the accounts of winning and losing and leave the administration of the country to those who are able to dissolve it.”

Regarding the justification for his “right” to lead the country again, Al-Maliki said, “Whoever praises us now starts from the old saying, try someone else to know good.”

Iraqis acknowledge that the country is still living in poor conditions and is facing security, economic and social difficulties during the period of the Al-Kazemi government, which came as an alternative to the government of Adel Abdul Mahdi, which the street insisted on its departure, but they assert, on the other hand, that the current situation is the result of what accumulated during the previous period, especially during the period of rule Nuri al-Maliki, the relatively long one, in which development was practically halted for eight years, and immediately after that the country entered a devastating war against ISIS, which invaded the country on a paved ground of sectarianism that the leader of the Dawa Party had fomented, as well as his role in weakening the armed forces, which witnessed a state of near collapse before an advance A few hundred ISIS operatives in the summer of 2014.

Al-Maliki not only tried to market himself locally, but also made sure to issue references to both Iran and the United States, who know very well that their role in the political process in Iraq is still in place, and that the choice of who governs the country has always been subject to a state of tacit and undeclared consensus between them despite Their intense struggle for influence in the country.

Al-Maliki claimed that he had “good relations” with US President Joe Biden, his Secretary of State and his team in the new administration, which he described as “much better than the previous one,” in reference to the administration of former US President Donald Trump.

“By virtue of my relationship with Biden, he will enter into negotiations within the framework of the Iranian nuclear file,” he said in the television interview, adding, “If any Iranian or American party wants (to intervene) to solve the crisis between them, I have no objection.”