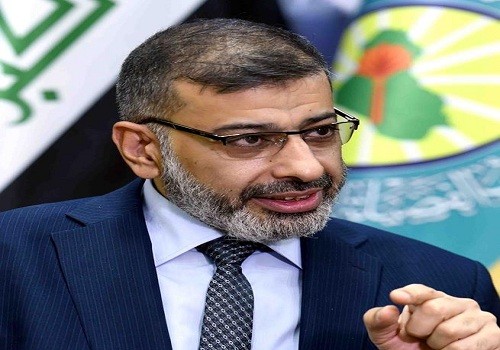 BAGHDAD – Mawazine News
the head of the National Approach bloc, Ammar Tohme, presented, on Tuesday, 12 proposals regarding the financing of the fiscal deficit law.
Tohme said, in a statement that Mawazine News received a copy of: “We present the following notes on the Financial Deficit Financing Law:
1. The book of the Ministry of Finance on (9/1/2020) stated that the Accounting Department had financed approximately (49) trillion dinars for the period from 1/1/2020 until 9/1/2020, meaning that the funding rate was approximately six trillion per month, while this fiscal deficit financing law states that public expenditures estimates for the remaining four months are close to (58) trillion, at a rate of (14.5) trillion. One dinar per month is nearly double what was spent in the first eight months of the year, and this increase, with the drop in the price of oil and the lack of Iraqi oil exports, is inconsistent with the principle of compression of expenditures and being limited to what is necessary from them, and the budget bears more financial deficits without an acceptable justification.
2. By analogy with the actual spending spent in the first eight months of the year 2020, the total assumed spending in the last four months of the year is approximately (24) trillion dinars, and since the expected revenues for those months are supposed to be (22) trillion dinars, with non-oil revenues Then, the financing gap (deficit) is close to (2) trillion dinars, so why should the government carry the budget a deficit of (41) trillion for the next four months only! Even if Kuwait’s debts and licensing contracts are excluded and subtracted from revenues, the supposed deficit does not exceed (7) trillion for the aforementioned period.
3. The strange thing about this law is that it specified the Kurdistan region’s share of the total actual spending for current and investment project expenditures without restricting the region to its obligations towards the federal government. The law indicated an outline reference to the 2019 Budget Law that can be interpreted later politically as has been used in previous years, which means It gives him a cut-off percentage of what was actually spent in the past eight months even though the region did not deliver the oil produced in it, as well as for the next four months even if the region did not commit to delivering the oil produced in it, and the disbursement of expenditures to the region was supposed to be dependent on the region’s commitment to deliver oil, the outlets revenues and the rest of the revenues. The federal government is complete.
4. Calculating the quantities of oil produced in the region at a rate of (250) thousand barrels per day that does not coincide with reality, because the region’s production is more than these quantities by more than twice, and the constitution obliges all governorates and the region to hand over all of their oil products to the federal authority that distributes its revenues according to unified fair standards that apply to everybody.
5. The table of current expenditures includes an amount of (3.6) trillion for the region during the next four months. If the salaries of the region’s employees are (370) billion dinars per month, then their total for the next four months is approximately (1.5) trillion dinars, so what is the address of the remaining estimated amount ( 2.1) trillion dinars! Noting that the regional government has not received the region’s oil product since the beginning of this year.
6. The table of current expenditures included an amount of more than (2,4) trillion dinars in the title of goods, services and the rest of the expenses. Does the difficult financial situation bear spending such large sums in public addresses, and many of them are unnecessary in stable economic conditions, so how in such critical circumstances Financially?
7. Estimating the price of oil at forty dollars is at risk with the continuation of the Corona pandemic and the fluctuation of market prices, and then the deficit gap will increase and the expenditure pressure required in such volatile circumstances will weaken.
8- We demand a government effort to postpone the payment of compensation to Kuwait, which will save more than (500) billion dinars.
9. It is very unfair for Iraq to pay five trillion dinars as dues to licensing round companies out of a total of (17) trillion estimates of oil revenues for the last four months of 2020, by (30%) of the total oil revenues for the same period. This calls on us to renew the demand to review the licensing rounds and correct their contracts in a way that achieves fairness for Iraq and eliminates the unjustified losses caused by these contracts biased in the interests of foreign companies.
10. The law provides for the financing of current expenditures as an exception from the Financial Management Law in the article restricting the disbursement at a rate of 1/12 or less of the actual expenditures of the previous year. We know that the expenditures of the past year are greatly exaggerated. If we add the scarcity of revenues for this year in comparison to the previous year, then there is no reason. Acceptable for this exception.
11. In this law, the government is required to continue to work with articles (2-3) of the Domestic and External Borrowing Law for the year 2020, noting that Article Two of the Borrowing Law provides for the continuation of borrowing from abroad, and since the article on the enforcement and enforcement of this law made this second article effective Open without a specific time limit, this means granting the authority to borrow abroad for this government and subsequent governments in an open manner that extends for many years without referring to Parliament.
12. The article on the enforcement and enforcement of this law stipulates that the article on authorizing the Minister of Finance to authorize internal and external borrowing shall remain in effect openly beyond the end of this year, and it is assumed that the term of the authorization of borrowing ends with the end of the entry into force of this law on 1/1/2021.