Washington withdraws 2,500 troops from its forces in Iraq

Washington withdraws 2,500 troops from its forces in Iraq 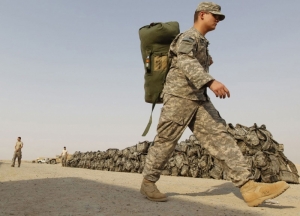 BAGHDAD – The United States withdrew 2,500 troops from Iraq, expressing to Baghdad “annoyance and concern” over the repeated targeting of diplomatic missions, according to a statement by the Iraqi Prime Minister.

Prime Minister Mustafa Al-Kazemi said in a televised interview that “a great achievement was achieved in the strategic dialogue with the United States,” so that “an agreement was made on the redeployment of American forces and the exit from Iraqi bases, and 2,500 American soldiers were withdrawn from the country,” without further details.

Al-Kazemi added, “Before my trip to Washington, I met all the political forces, and some of them asked me to negotiate with the Americans that they would withdraw from Iraq over a period of 8 years. I negotiated and we got a period of 3 years.”

Regarding the closure of the Washington embassy in the capital, Al-Kazemi said, “We have received American annoyance and concern regarding the security of its diplomatic missions in Iraq because of the absurd missiles.”

About 5,000 American soldiers deployed to military bases across Iraq in 2014, at a governmental request, within the international coalition to fight ISIS, after 3 years of leaving in 2011, after 8 years of occupation following the overthrow of Saddam Hussein’s regime. A recent statistic about the forces now.

On August 20, Al-Kazemi visited the United States, during which he headed his country’s delegation to manage the strategic dialogue with Washington.

The meetings resulted in an agreement that Washington would withdraw its forces within 3 years, according to what US President Donald Trump announced on the sidelines of his meeting with Kazemi.

But reducing the number of American soldiers on the ground of Iraq does not mean a total withdrawal, as the administration of President Donald Trump worked to establish an American military presence on the ground of Iraq, which is long-term but limited in number and safe, allowing the United States to closely monitor its rival Iran, especially its movements on the Tehran-Damascus axis, through Beirut. In Iraqi lands. At the same time, he does not neglect the concern to avoid casualties among the American forces with the approaching presidential elections, as Trump knows how sensitive this factor is among the American voter.

Al-Kazemi pointed out that “the threat to isolate Iraq will lead to a direct economic collapse, as most Iraqi financial deposits are made through the United States,” explaining that “there are multiple parties (he did not name them), some of them are involved in corruption, some are gangs, and some are groups involved in chaos.”

For months, the “Green Zone”, which includes government headquarters and foreign embassy missions in Baghdad, and military bases hosting the international coalition forces led by Washington, has been subjected to missile strikes and IED attacks by unknown parties.

Al-Kazemi said that “investigative committees are currently working with regard to the missile strikes and killing demonstrators, and the results of the investigations will be revealed after they are completed.”
According to Iraqi government statistics, 565 protesters and security personnel were killed during the protests that began in October 2019, to denounce the living conditions and the “spread” of corruption.

The commander of the US military command in the Middle East, General Kenneth McKinsey, confirmed last month that the United States decided to reduce the number of its forces in Iraq from 5,200 to 3,000 soldiers.

“After acknowledging the great progress made by the Iraqi forces and consulting and coordinating with the Iraqi government and our coalition partners, the United States decided to reduce its military presence in Iraq from about 5,200 to 3,000 soldiers,” the general said in Baghdad.

Supply convoys of the US forces, affiliated with the international coalition, have been targeted more than once, since last July, and it is believed that the armed groups carrying out those operations are the same Iraqi Shiite militias that raise the banner of “resistance” to the US military presence in Iraq, even if they began to hide under unknown names In the past, in an attempt to avoid the American response, which could be painful and does not exclude the senior leaders of these militias.

In January, the Iraqi parliament voted on a parliamentary resolution obligating the government to cancel the request for assistance from the international coalition to fight ISIS, led by the United States of America.