Security measures tightened in Baghdad, with Washington threatening to close its embassy

Security measures tightened in Baghdad, with Washington threatening to close its embassy 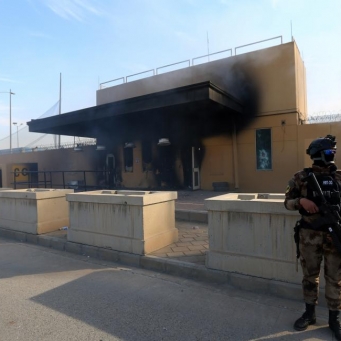 Despite the Iraqi authorities’ move to make contacts to ease the severity of the US measures that are being talked about, about Washington’s intention to close its embassy in Baghdad and transfer its ambassador Matthew Toller to Erbil, due to the threats of armed militias, the official Iraqi position was not clearly announced until Monday morning.

On the other hand, a spokeswoman for the US State Department confirmed that the attacks of armed groups pose a threat to everyone, and indicated that the continuation of the attacks could affect international financial support for Iraq.

Neither the Iraqi Prime Minister, Mustafa Al-Kazemi, nor the Ministry of Foreign Affairs, issued any official clarification regarding the reports circulating that spoke about the imminent closure of the US embassy in Baghdad.

However, an official in the Iraqi Ministry of Foreign Affairs confirmed to “Al-Arabi Al-Jadeed” that the ministry is conducting intensive contacts with officials in Washington, explaining that the ministry has not received any official position indicating the embassy’s closure.

The same official added, on condition of anonymity, that the American response that Iraq received indicated that there was a plan by groups linked to Iran to repeat the attacks on the embassy, ​​and very badly, it could reach the tragedy of the US consulate in Benghazi in 2012, in which the ambassador and a number of Members of the American diplomatic staff as a result of a terrorist attack.

And he indicated that the Ministry of Foreign Affairs is coordinating with the relevant government agencies in order to maintain the security of all diplomatic missions operating in Iraq, as this represents a right for these missions according to international laws and norms, adding that “double forces have already been pushed into the Green Zone to reassure all foreign missions.” He also considered that the coming hours will ensure the decision to maintain or close the embassy’s work and to transfer part of its activities to the US consulate in Erbil.

This comes as a spokeswoman for the US State Department confirmed to the “Washington Post” newspaper, at dawn on Monday, that the continuing attacks of Iranian-backed militias constitute a threat to diplomatic missions and the areas surrounding the Green Zone, indicating that the United States of America has managed to thwart attacks launched by armed groups on the American embassy. in Baghdad.

The spokeswoman, whose name was not disclosed by the newspaper, pointed out that the presence of outlaw militias backed by Iran, at a time when the United States of America is trying to secure financial support for Iraq from the international community and the private sector, remains the biggest deterrent to additional investment in Iraq. The “Washington Post” quoted an Iraqi official as saying that the US administration had asked Baghdad to take stronger measures against the armed militias, indicating the possibility of avoiding the closure if that happened.

A member of the Foreign Relations Committee in the Iraqi Parliament, Amer Al-Fayez, said that the American ambassador in Baghdad, Matthew Toller, informed the President of the Republic, Barham Salih, that Washington would close its embassy in Baghdad if the attacks on the embassy continued with Katyusha rockets. US forces mean that “Washington wants to punish those who bomb its embassy in Iraq.”

Al-Fayez pointed out that the United States of America has not submitted an official report to Iraq indicating the closure of its embassy in Baghdad, adding: “However, they threatened to do so.”

And he stressed the need for everyone to cooperate, in order to stop the attacks that harm Iraq’s diplomatic reputation.