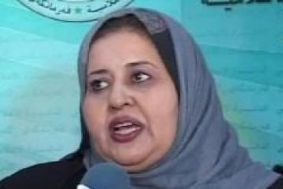 Diyala / NINA/ Nahida al-Daini MP from Iraqiya List ruled out “questioning the Prime Minister Nuri al-Maliki in the Parliament which does not have the ability to question a Minister.”
She told / NINA / today that ” the paper of reforms announced by the National Alliance is to bring the point of views of the political blocs, and the internal crisis can be resolved either by dialogue or implementation of Arbil agreements,” saying “the possibility of easing the political crisis can be achieved if there is a goodwill among the political parties participating in the government.”
Daini MP from Diyala province demanded the Commission of amending the constitution to speed up its work to fill the gaps and re-drafted the constitution which serves the political process that is the cause of the crisis in Iraq. / End