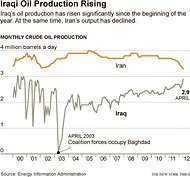 The increased flow and vital port improvements have produced a 20 percent jump in exports this year to nearly 2.5 million barrels of oil a day, making Iraq one of the premier producers in OPEC for the first time in decades.

Energy analysts say that the Iraqi boom — coupled with increased production in Saudi Arabia and the near total recovery of Libya’s oil industry — should cushion oil markets from price spikes and give the international community additional leverage over Iran when new sanctions take effect in July.

“Iraq helps enormously,” said David L. Goldwyn, the former State Department coordinator for international energy affairs in the Obama administration. Even if Iraq increased its oil exports by only half of what it is projecting by next year, he said, “You would be replacing nearly half of the future Iranian supply potentially displaced by tighter sanctions.”

For Iraq, the resurgence of oil, which it is already pumping at rates seen only once — and briefly — since Saddam Hussein took power in 1979, is vital to its postwar success. Oil provides more than 95 percent of the government’s revenues, has enabled the building of roads and the expansion of social services, and has greatly strengthened the Shiite-led government’s hand in this ethnically divided country.

Oil has also brought its share of pitfalls for the fledgling democracy, fostering corruption and patronage, and aggravating tensions with the Kurdish minority in the north over the division of profits, a festering issue that could end up fracturing the country.

The Iraqi government says it can add an additional 400,000 barrels a day of production by next year, and it has announced a goal of producing 10 million barrels a day by 2017, which would put it in a league with Saudi Arabia.

Few independent analysts say they believe the larger goal is realistic, but oil company executives have been impressed by Iraq’s progress and ambition.

“What the government is embarking on and the increase in production they are looking for under all of these contracts is unique in the world,” said Michael Townshend, president of BP Iraq. But, he cautioned, “Nobody has yet managed to increase oil production in their country to the extent Iraq is planning to. It’s hugely ambitious, and it will take a lot of things to work correctly.”

The country’s improving oil fortunes are well timed to compensate for Iran’s declining oil output, which according to OPEC fell by 12 percent in the first three months of the year as India, China and other Asian nations have gradually cut purchases under pressure from the United States and Europe.

With little if any progress achieved so far in negotiations between the West and Iran over its nuclear program, and Iran’s nuclear chief reaffirming last weekend that the country would continue producing higher-grade uranium, Western sanctions are set to tighten in July.

Iraq’s role in ameliorating the effects of those sanctions in the oil market could create tensions with Iran, a strong backer and ally of the Iraqi government. But oil experts say exports are too valuable for Iraq to allow its relationship with Iran to impede production.

The recovery of Iraq’s oil industry after decades of wars, sanctions and neglect began in 2009 and 2010 as security improved and Baghdad signed a series of technical service contracts with foreign companies like Exxon Mobil, BP, China National Petroleum Corporation and ENI of Italy. The companies brought in modern seismic equipment and modern well recovery techniques to resuscitate old fields.

The deals have been only modestly profitable for the foreign companies, but foreign executives express cautious optimism that Iraq can eventually produce oil in amounts that could put it in an elite group of exporters with Saudi Arabia and Russia sometime in the 2020s.

International oil executives say the government bureaucracy is still slow and poorly coordinated in building new port and pipeline infrastructure to get oil to the tankers from the fields. The political battle over divvying up profits has prevented the enactment of a national oil law, meaning that the companies need to follow myriad regulations, some of which date back to the Ottoman Empire. Electrical shortages are forcing politicians to choose between serving the oil companies or restive civilian populations that want more reliable utility service.

To increase output, the country will need to develop a huge water project to filter and pump seawater into old oil fields to increase the pressure required to coax crude out of the ground. Planning has begun, but the project is progressing slowly.

Iraq will also need to negotiate a sizable export quota within OPEC to accommodate its increasing potential, a nettlesome process that could produce tensions with Saudi Arabia and Iran.

Some of the problems were on display at last week’s oil and gas auction, the country’s fourth postwar bidding round, where only 3 contracts were awarded out of 12 up for bid.

The auction, in an auditorium at the Ministry of Oil, had the trappings of a militarized movie premiere, with red carpets, velvet ropes, hordes of photographers and a white-uniformed honor guard carrying Kalashnikov rifles fixed with bayonets. The proceedings were carried live on state television. An elevator-music rendition of Lionel Richie’s “Hello” played over and over.

The room was packed with diplomats, politicians and foreign oil executives, but few actual bidders.

“There are three minutes left and it seems like no one wants to bid,” Abdul Mahdy al-Ameedi, the ministry official overseeing the auction, said at one point.

The disappointing auction was less a reflection of lack of interest in Iraq’s energy sector than of the tough terms demanded by the government, the location of some of the fields in dangerous and remote regions of the country, and the fact that many of the blocks up for bid were for natural gas, which is less attractive to foreign companies than oil.

Iraq also used the auction to slap Exxon Mobil’s hand for signing production sharing contracts for 850,000 acres in the Kurdistan region without getting permission from the central government, denying the company the right to bid.

But at the same time, Iraq has not touched Exxon Mobil’s oil contracts in the south, a sign of pragmatism, or perhaps paralysis, international oil analysts said.

Exxon Mobil has by far the largest stake of any American company in Iraq, but most of the major players are European and Asian, like Lukoil and Gazprom from Russia, and Chinese companies like China National Petroleum and China National Offshore Oil Corporation.

Despite the uncertainties, the foreign companies say they are staying.

“We are in Iraq because we think there is big potential, huge production growth,” said Claudio Descalzi, chief operating officer for exploration and production at ENI, the Italian oil giant. “In the future, things can only get better.”