Iraq: Forces allied with Iran towards forming a “state administration” coalition to solve the crisis

Iraq: Forces allied with Iran towards forming a “state administration” coalition to solve the crisis 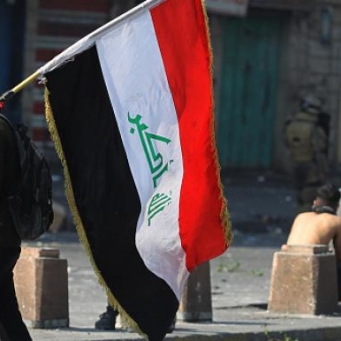 Leaders in the “Coordination Framework” coalition, which includes Iraqi forces allied to Iran, confirmed that they are close to announcing the formation of the “State Administration” coalition, which includes Sunni and Kurdish Arab forces in addition to the “Coordination Framework,” in a move aimed at resuming the work of Parliament and forming the new government.

Late last night, the meeting of political leaders from the “Coordination Framework”, the “Sovereignty” alliance, the “Kurdistan Democratic Party”, and the “Azm” alliance ended, but there was no official announcement of the formation of the alliance, except for statements and tweets by a number of From frame strengths only.

Informed sources confirmed to Al-Araby Al-Jadeed that Hadi Al-Amiri, the leader of the Al-Fateh alliance, had failed to attend the meeting, as well as prominent leaders in the “coordinating framework.”

Arab reports
, movement to form a “state administration coalition” in Iraq… Feeling the pulse of the Sadrist movement?
Hisham al-Rikabi, director of the office of the leader of the State of Law Coalition, Nuri al-Maliki, said in a tweet, “The ship of the State Administration Coalition has sailed,” without giving further details.

The leader of the “Wisdom Movement” Fadi Al-Shammari, in a tweet on his official account, confirmed the final agreement to form a “state administration” alliance between the framework and the two Kurdish parties, the “Azm” alliance, the “Sovereignty” alliance, and the “Babylon” bloc, noting that it had taken place. Signing the political agreement paper, in the hope of completing the consultations to nominate a candidate for the presidency, and setting a date for the resumption of the work of the Iraqi parliament to its constitutional duties.

Local news websites and social media pages circulated an “unofficial” document about the alliance’s announcement, which included many points, confirming the agreement between all the blocs in the “state administration” coalition to sign a document that included the demands of all blocs except for the “Sadr movement,” indicating that “ Everyone agreed to hold a session of Parliament.”

It also included “the amendment of the election law, holding elections a year after the amendment, holding provincial elections before the legislative elections, and forming the government according to the principle of consensus and electoral benefits.”

The Sadrist Movement comments on the new movement
In the first comment from the Sadrist Movement on the current movement of the forces of the “coordinating framework” to form the new political coalition, the prominent leader of the movement, Ghaleb al-Amiri, said in press statements: “The framework remains a framework and it is impossible to become an engine.” .

Politics/The Sadrists storming the Iraqi parliament/(Murtaza Al-Sudani/Anadolu)
Arab reports
There is no session for the Iraqi parliament until after the consensus with the Sadrists has been resolved
. The difficulty of proceeding with the formation of a government for four years. A member of the coalition, Aqil Al-Rudaini, said in a statement to the official Al-Sabah newspaper today, Monday, that his coalition “presented many initiatives to reach safe outcomes for the political process,” stressing that “it cannot form a government for 4 years in the absence of the current”.

He stressed that “our initiative included a realistic vision and relied on the language of dialogue and going to early elections, and to form a transitional government that would be an opportunity for (the Sadrist movement) to return to Parliament through early elections.”

The “Kurdistan Democratic Party” explains its position on forming the “state administration” coalition
In addition, the head of the “Kurdish Democratic Party” bloc in the Iraqi parliament, Vian Sabri, explained her party’s position in forming the “state administration” coalition by saying that “the political parties have reached good understandings about It is expected that the deputy speaker of parliament will be chosen next week, and then the new coalition will be formed.”

In statements to the Kurdish “Rudaw” station, which is close to the Kurdistan Regional Government, Sabri said: “There must be points in the government program that pertain to Iraq, and other points that pertain to the Kurdistan region. The agreement revolves around three axes, the first is what Parliament should do, as there are some important laws that Parliament must ratify in the next stage, such as the Oil and Gas Law, the Federal Court and the Federal Council Law.

And she continued: “As for the second axis, it concerns Iraq in general, such as what the government should do. . As for the third axis, it revolves around what political forces should do.

She indicated that her party is continuing discussions with the National Union regarding the candidate for the presidency of the republic, indicating that the political reality is closely related to what will happen to matters within the Shiite house, stressing that no final understanding has been reached on this issue.

On Sunday, a member of the Coordinating Framework, Mahmoud Al-Hayani, confirmed to Al-Araby Al-Jadeed that the new coalition includes the Coordinating Framework, the Al-Azm coalition led by Muthanna Al-Samarrai, the Sovereignty coalition led by Khamis Al-Khanjar, and the Democratic Party. It is led by Massoud Barzani, the “National Union” headed by Bafel Talabani, and the Christian “Babylon” bloc led by Rayan Al-Kildani, according to statements to reporters in Baghdad.

The axes of the Iraqi crisis are currently summarized in the insistence of the “coordinating framework” forces to resume parliament sessions and resume its work in full, as it adheres to electing a president of the republic and a head of a government with full powers instead of the current caretaker government headed by Mustafa Al-Kazemi, and then going towards amending the current election law.

On the other hand, the Sadrist movement rejects this and insists on dissolving Parliament and holding early elections within 9 months. It also proposes amending Paragraph 76 of the Constitution related to the major bloc that has the right to form a government. He also raises another demand, which is the amendment of the Federal Court law to be more independent of the political parties that, since 2005, have actually chosen the 11 members of this court, using sectarian and partisan quotas. In addition, the Sadrist movement refuses to amend the election law.