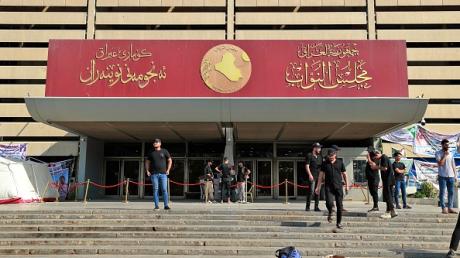 The Iraqi political forces are awaiting the end of the undeclared calm imposed by the religious visit ceremonies that have continued for several days in the cities of Karbala and Najaf, where more than 3 million pilgrims from inside and outside Iraq gather, and it is scheduled to end next Sunday.

Political sources and parliamentarians confirm, in separate conversations with Al-Araby Al-Jadeed, that there is a serious tendency to cancel the suspension of parliament’s work and resume its sessions again next week, after the forces of the “coordinating framework” collected about 140 parliamentary signatures directed to the presidency of the House of Representatives in this regard.

Signs of détente in the Iraqi political scene come after more than 330 days of the country’s most complex crises since the US invasion in 2003, following unconventional elections held by a new law that divided the country into multiple districts. The Sadrist movement succeeded in winning by a large margin over the forces classified as allies or supported by Tehran, in addition to the emergence of civil forces and independents for the first time as important figures that cannot be ignored in Parliament.

A decisive week in the political scene
On the other hand, the chances of the Sadrist movement moving again against any movement aimed at forming the new government, through the forces of the “coordinating framework”, is still strong. Therefore, observers consider that the next week may be decisive in the Iraqi political scene, after the end of the ceremony of the fortieth visit of Imam Hussein in Karbala, and the return of the movement’s leader Muqtada al-Sadr to interact politically with the public scene in Iraq.

In this context, a prominent leader in the “Al-Fateh” coalition, the political wing of the “Popular Mobilization”, revealed to “Al-Araby Al-Jadeed” that “more than 140 signatures of members of Parliament have been collected for a petition addressed to the Presidency of the House of Representatives calling for canceling the suspension of the Council’s work and resuming its sessions.” again”.

On July 30, Parliament Speaker Muhammad al-Halbousi announced the suspension of parliament’s work until further notice after al-Sadr’s supporters stormed the Green Zone and took control of the building located in the center of the fortified international zone in Baghdad.

According to the leader, who asked not to be named, the employees of the Parliament’s Legal and Administrative Committee have returned to work in their offices in the Parliament building, and the technical and administrative aspects have been prepared to resume work again.

He considered that the suspension of the parliament’s work is no longer needed, and the signatures will oblige Al-Halbousi to resume his work again, noting that the request is scheduled to be delivered next Monday, after Sunday is considered an official holiday on the occasion of the Arbaeen visit .

He pointed out that activating the parliament’s work means positive progress in the political scene, and the return of the legislative authority’s work again, after a hiatus of about a month and a half.

Attempt to pass a middle agreement
The political forces are counting on several points, in an attempt to pass a compromise agreement supported by the United Nations Mission in Iraq, based on the one-year government, through a ministerial formation whose mission is to organize new elections no later than December 2023, in addition to choosing an unaccounted prime minister. On any of al-Sadr’s main opponents, namely Nouri al-Maliki , Qais al-Khazali, and Ammar al-Hakim. During this period, the parliament will undertake the task of reconsidering the provisions of the constitution that caused the crisis, according to a representative of the Kurdistan Democratic Party in Erbil.

The deputy, who asked not to be named, revealed to Al-Araby Al-Jadeed that he planned to visit Al-Sadr in Najaf in order to urge him to accept this settlement. He explained that the delegation will include prominent Sunni, Kurdish and Shiite figures to meet Al-Sadr in Najaf, adding that “the chances of meeting him are still not assured with certainty, but it is important for Al-Sadr to accept any political orientation, otherwise the current crisis will not end.”

In this context, Ayat Al-Muzaffar, a spokeswoman for the “Victory” coalition led by former Prime Minister Haider al-Abadi, revealed the existence of a committee within the “Coordination Framework” coalition to discuss the file of the candidate for prime minister.

Al-Mudhaffar added, in statements to a local Iraqi TV, that “the committee may put forward the name of the prime ministerial candidate. The current stage does not bear the presence of a controversial personality.” And Al-Mudhaffar considered that “the political crisis does not end with the formation of the government only, and that it is one of the necessities of the stage that it needs a man of political authority, not an administrative one.”

In Baghdad, several names of candidates to be a substitute for Muhammad Shia al-Sudani for the one-year government are leaking. All of them note that they do not intersect with al-Sadr, such as the former governor of Najaf, Adnan al-Zarfi, and the current governor of Basra, Asaad al-Eidani, who in several political positions converged with the Sadrist movement in the current crisis and chose neutrality between the two opposing Shiite camps. The names of Haider al-Abadi, as well as the current Iraqi National Security Adviser, Qassem al-Araji, and the first advisor in the Presidency of the Republic, Ali Shukri, were also leaked.

In this regard, Ahmed Al-Sudani, a member of the “State of Law” coalition, said that “the decision to nominate a candidate to head the next government remains confined to the coordination framework.”

Al-Sudani pointed out, in a press statement, that “there are many alternative candidate names (for Al-Sudani), but the names are not mentioned, but rather the specifications of the prime minister.”

Kurdish differences continue over the presidential candidate
In addition to the differences between the Iraqi parties, the Kurdish parties, the Kurdistan Democratic Party and the Patriotic Union of Kurdistan, did not reach a joint candidate for the post of President of the Republic , which was the political custom in the country to be from the share of the Kurdish political forces. The Kurdistan Democratic Party adheres to its candidate, Reber Ahmed, while the Patriotic Union of Kurdistan adheres to its candidate, Barham Salih, and is demanding a second term for him.

In a press conference, the day before yesterday, Tuesday, Kurdistan Democratic Party spokesman Mahmoud Muhammad stressed the need for the parties involved in the political process to reach a “realistic agreement” on the next steps, and said that “dialogues are continuing until now, but we do not have a joint candidate.” .

However, the leader of the Patriotic Union of Kurdistan, Rabha Hamad, reiterated, hours later, that the two parties were “close to agreeing on a candidate for the post of President of the Republic.”

The past ten months witnessed the PUK’s adherence to its candidate, Barham Salih, while the Democratic Party adhered to its candidate, Reber Ahmed. Politicians from the Kurdistan region spoke of the “lack of confidence” being the most prominent factor in the negotiations between the Kurdish parties, which led to the difficulty of reaching an agreement.

Holding the session to elect the new president of the republic requires the presence of two-thirds of the parliament’s representatives (220 out of 329), according to what was decided by the Federal Supreme Court, amid fears of not achieving a quorum if the Kurdish forces fail to reach an agreement on one candidate representing them.

The importance of choosing a new president for the country lies in the fact that the constitution obligated the elected president in Parliament, in the same session, to assign the candidate of the “large bloc” to form the government.

The office of the Presidency of the Republic in Iraq does not have any executive powers, according to the constitution approved in 2005 by a popular referendum, nearly two years after the US invasion. The constitution limits the executive powers completely to the head of the government, while granting the president of the republic ceremonial tasks, such as signing republican decrees, imitating decorations and medals, submitting proposals for laws and legislation, representing Iraq in international forums, as well as assigning the candidate of the largest bloc in Parliament to form the government.

Al-Nuaimi added, speaking to Al-Araby Al-Jadeed, that “the expected visit of Najaf for the political leaders to meet with Al-Sadr remains a criterion for judging the presence of signs of a solution to the crisis.” He may be persuaded to accept the settlement by withdrawing Al-Sudani’s candidacy and not giving Al-Maliki any role in the new interim government, and pledging not to target those affiliated with Al-Sadr in the government’s joints, starting with the cabinet and ending with the ministries and bodies.

But according to Al-Nuaimi, “even if the current crisis is dismantled and the government is formed, it will remain a turning point in the Iraqi political work, and it may be repeated more frequently in the future, especially with the recording of armed confrontations that led to casualties on both sides.”