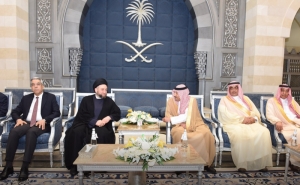 RIYADH – The leader of the Iraqi Wisdom Movement, Ammar al-Hakim, arrived in Saudi Arabia on Thursday morning, in an attempt to persuade officials in the Kingdom to mediate between the Shiite coordination framework and the leader of the Sadrist movement, Muqtada al-Sadr, to open channels of dialogue in order to resolve the political crisis in the country.

Iraq has been living since last October on the impact of a deepening crisis between the Sadrist movement and the coordination framework in relation to the management of the political process following the legislative elections. Which is led by the leader of the State of Law coalition, a similar move.

For days, Baghdad has witnessed two counter-sit-ins. The first has been going on for three weeks by supporters of the Sadrist movement next to the Iraqi parliament, and the other was called by the “Organizing Committee to Support Legitimacy and Preserve State Institutions,” emanating from the “Coordination Framework Forces” at the walls of the Green Zone from the side of the suspension bridge.

Al-Hakim’s visit to Saudi Arabia comes after he attended a conference of Iraqi political forces to discuss the crisis that Iraq is currently witnessing.

“Shafaq News” agency quoted a diplomatic source at the Saudi embassy in Iraq as saying that the reason for the visit was the desire of the coordinating framework to enter the Kingdom as a mediator between him and Muqtada al-Sadr.

The Saudi diplomat, who asked not to be named because he was not authorized to declare, suggested that the political leadership in the kingdom would not involve itself in the internal Iraqi affairs, and would not support one party against another, but it would not object to any Iraqi delegation visiting the kingdom.

And about the beginning of Al-Hakim’s communication with Saudi Arabia and expressing his desire to visit, the Saudi diplomat indicated that Al-Hakim communicated 10 days ago with a Saudi diplomat in Erbil, and informed him that he intended to visit Riyadh regarding the political crisis and Al-Sadr’s recent moves.

The Sadrist movement criticized Al-Hakim’s visit to Saudi Arabia in a statement Thursday, in which he announced his rejection of the meeting of the Iraqi political forces called for by Prime Minister Mustafa Al-Kazemi at the government headquarters in Baghdad, and considered it “only resulted in points that do not enrich or fatten from hunger,” calling for public dialogue sessions, As a condition for the participation of the current, which was absent from its first session on Wednesday.

Saleh Muhammad al-Iraqi, who is known locally and in the media as “the Minister of al-Sadr”, said on Twitter that “it is remarkable that one of them went to the sisterly Kingdom of Saudi Arabia a few hours after the end of the dialogue session.”

He added, “If we were the perpetrators, they would have said that the dialogue session was under pressure from the outside and notice from the normalizers and the Americans, and the like.”

Al-Iraqi criticized that session, saying that most of the attendees at the “Al-Kazemi meeting” “are only interested in him remaining in the chair… Therefore, they tried to minimize the revolution and stay away from its demands.”

Al-Iraqi added in his statement that “the revolution does not want anything like you but to step down from a chair on which you have unjustly imposed your presence,” considering that the meeting aims to “form a government according to the goals of some in order to increase their expansion and the rooting of their deep state, so that they control the fate of a people who reject their presence, so they visit the elections. And they make it their own.”

The political forces participating in the meeting called on the Sadrist movement to engage in dialogue to “establish mechanisms for a comprehensive solution to the political crisis in the country, and to stop all forms of escalation.”

Al-Iraqi expressed the Sadrist movement’s lack of interest in the “secret session”, but he said, “Do not increase the people’s anger against you, and do not do anything that increases the people’s fear of the democratic process that you are sewing according to your measure.”

He called for making the session public by “broadcasting it directly to the people”, if “you want to fill the empty chair,” referring to the seat designated for the representative of the Sadrist movement, which appeared empty in the meeting.

He pointed out that the aim of his statement is to inform the people of “what is going on behind the scenes of conspiracies, intrigues and leaks that no one has condemned so far with great regret.”

On Thursday, the “National” coalition led by Iyad Allawi expressed his regret for not inviting him and other political forces to the national dialogue meeting that Al-Kazemi sponsored on Wednesday, and said that he was “surprised” about this, while noting that the meeting did not come out with practical results at the level of the seriousness of the stage, which wasted “an opportunity to get out of the situation.” the crisis”.

After the meeting, the political forces participating in the meeting affirmed their “commitment to national constants and finding a solution to all crises through dialogue, and by adopting a spirit of brotherhood and synergy. As well as preserving the unity of Iraq, the security and stability of its people, and the permanence of the constitutional democratic system to which everyone appeals.

The meeting’s statement reiterated the “higher national interests and a spirit of solidarity among the people of the same nation, in order to address the current political crisis.”

The Iraqi political forces indicated during their meeting that resorting once again to the ballot boxes through early elections “is not an exceptional event in the history of democratic experiences, when political crises reach dead ends,” noting that “national political forces resort to constitutional tracks in elections.” .

Iraq has been experiencing a political blockage since the parliamentary elections in October, in which the Sadrist movement won the largest number of seats with 74 seats, before the deputies of his bloc resigned from Parliament in June, at the direction of al-Sadr, after failing to form a government or elect a president.

The leader of the Sadrist movement was insisting, before the resignation of his bloc’s deputies, to form a national majority government, while the deputies of the “Coordination Framework” bloc insisted on forming a coalition government headed by Muhammad Shiaa al-Sudani, which sparked large protests in Baghdad, after which the Iraqi parliament was stormed, while Hundreds are still camping in the vicinity of Parliament.