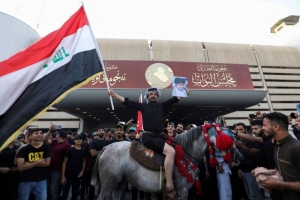 BAGHDAD – Iraqi political sources said that the Sadrist movement’s call for its supporters to vacate the Iraqi parliament building and move their sit-in outside it paves the way for entering into a political dialogue with the coordinating framework, which would spare Iraqis clashes that might take on sectarian and sectarian dimensions that afflict the fragile country’s stability and deepen its crises.

The sources added that the Sadrist movement’s call to vacate the parliament building is a first step to resolving the political crisis through dialogue, and it must be matched by a step also from its political opponents.

Observers do not rule out the two parties entering into a political dialogue to heal the rift, but its results remain uncertain and hostage to the party who will manage the dialogue and the extent of its influence, credibility and influence as well.

The Sadrist movement called for the evacuation of the Iraqi parliament building on Tuesday, and the transfer of the sit-in of its supporters who have been inside it for four days to its outer courtyards, while calls for dialogue continue in order to resolve the crisis.

And Muhammad Salih al-Iraqi, who is close to al-Sadr, asked in a tweet to “evacuate the Iraqi parliament building,” and to “transform the sit-in in and around parliament and its approaches within a maximum period of 72 hours.”

Addressing the Sadrist movement’s supporters, he added, “The viability of the sit-in is very important for your demands to be achieved.”

Tensions escalated in Iraq after Muqtada al-Sadr rejected the name of the Coordinating Framework candidate, which includes Shiite factions loyal to Iran, for prime minister.

But the political crisis in the country continues to get worse, as Iraq has been experiencing complete political paralysis since the legislative elections in October 2021. Endless negotiations between the major political forces did not lead to the election of a president and the appointment of a prime minister.

Al-Sadr, who has a wide popular base, showed that he is still able to mobilize the masses for his political goals. Supporters of the Sadrist movement stormed Parliament twice in less than a week, and began a sit-in on Saturday, rejecting the nomination of Muhammad Shia al-Sudani, 52, by the coordination framework to head the government.

Mahdi Al-Sumaidaie presented a new initiative to intervene and hold a judicial session, understanding and solutions

As of Tuesday afternoon, hundreds of protesters were still gathered inside and outside the Iraqi parliament building. Tents were set up in the gardens of Parliament, in addition to traditional Ashura processions that served food and drink.

Al-Sadr’s two opponents also took to the streets. Thousands of supporters of the coordination framework demonstrated at the suspension bridge leading to the Green Zone, which includes government institutions, Western diplomatic headquarters, and the parliament headquarters “to defend the state, its legitimacy and its institutions.”

Meanwhile, calls for dialogue follow. On Monday night, Iraqi Prime Minister Mustafa Al-Kazemi called for “a national dialogue by forming a committee that includes representatives from all parties to develop a road map for a solution,” calling on “all parties to calm down and reduce escalation.”

The leader of the Al-Hikma Movement, Ammar Al-Hakim, which is part of the coordination framework, expressed his “support” for Al-Kazemi’s initiative, “especially with regard to the fact that the parties and partners of the Iraqi scene sit at a dialogue table that adopts a comprehensive national initiative that leads to ending the political blockage in the country.”

For his part, Parliament Speaker Muhammad al-Halbousi, whose bloc allied with the Sadrist movement in the Iraqi parliament before its resignation, announced his support for the initiative, stressing in a tweet, “The importance of everyone sitting at the dialogue table, and taking practical steps to solve the current crisis.”

And on Tuesday, the Grand Mufti of the Republic in Iraq, Mahdi Al-Sumaidaie, presented a new initiative to “intervene and hold a judicial session, understanding and solutions,” and said, “We are waiting for your approval of this scholarly request.”

Al-Sumaida’i addressed these parties by saying, “We hope to accept our invitation and open the door of the Iraqi Ifta House to you (…) to intervene between you for a session of justice, understanding and solutions, and we are waiting for your approval of this scholarly request, and we hope that you will keep the consciences of the people in mind.”

These initiatives and calls for dialogue and calm and to prevent a clash between the Shiite parties, while Muqtada al-Sadr is still sticking to his conviction not to allow the forces of the coordination framework to form a new government and to reject the nomination of Muhammad Shia al-Sudani.

The framework forces adhere to their constitutional right to form the government as the most numerous bloc in the Iraqi parliament, after it acquired 73 seats against the background of the Sadrist movement’s submission of their resignations from Parliament.