Al-Sadr calls on his deputies to resign: Another chapter in the game of scoring points against opponents

Al-Sadr calls on his deputies to resign: Another chapter in the game of scoring points against opponents 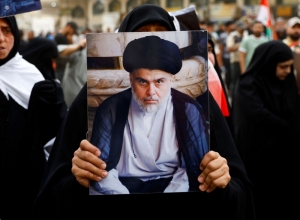 BAGHDAD – The leader of the Sadrist movement, Muqtada al-Sadr, called on Thursday the deputies of his political bloc, consisting of 73 deputies, to prepare to “resign” from parliament, so as not to be an “obstacle” to “forming the government”, in a move that observers said is closer to the maneuver through which he is trying Al-Sadr transferred pressure on his opponents, but it does not offer solutions to get Iraq out of the constitutional vacuum.

Al-Sadr’s waving of the resignation of his bloc’s representatives from Parliament reflected another form of escape forward that the leader of the Sadrist movement adopted during the past months in order to absolve himself of the accusations leveled against him, describing him as incapable of leading the negotiations to form the government and bearing the responsibility for governance that the Iraqi voters gave him.

Observers considered that al-Sadr, by calling on his bloc’s representatives to resign, is making a concession that he is not entitled to. Voters have given his bloc first place, and he must be at the level of their confidence. Otherwise, the solution lies in calling for new legislative elections for people to choose according to who is able to build a clear alliance to lead the country and not transform the story. into a personal struggle.

Al-Sadr, by calling on the representatives of his bloc to resign, is making a concession that is not his right.

Observers urged the Sadrist movement to think about formulas that lead to solving the crisis instead of continuing the game of scoring points on opponents and wasting the time that would be at the expense of Iraq before it would be for the benefit of this or that bloc, considering that the solution is in the hands of al-Sadr, who can lead efforts to form a government or Call to dissolve parliament and hold early elections.

The dissolution of Parliament requires that a third of its members present its dissolution before the Council, then the Council votes itself by half plus one, and dissolves itself.

He does not know how al-Sadr thinks of turning the resignation of his bloc’s deputies into a pressure card, or that this step will pave the way for the forces of the coordination framework to move freely and re-form alliances, allowing them to build the largest bloc and agree with the Kurds on the president of the republic, as well as naming a prime minister who is closer to Head of the State of Law Coalition, Nuri al-Maliki.

Eight months after the early legislative elections, the country’s main political parties are still unable to agree on the next government, and each of them claims to have a majority in parliament, which includes 329 deputies.

Al-Sadr said in his speech, “If the survival of the Sadrist bloc is an obstacle to the formation of the government, then all the representatives of the bloc are ready to resign from the House of Representatives and will not disobey me.”

He stressed that he has “two options: either the opposition or the withdrawal… Iraq needs a government with a majority that serves its people,” adding, “Then, let the Sadrist bloc’s representatives write their resignations from the House of Representatives in preparation for submitting them to the parliament presidency after instructing them in the coming days.”

In his speech, al-Sadr reiterated his rejection of a consensual government from all parties, saying that “the country’s reform will not be without a government of a national majority because the majority is for us and not for others.” He added, “I decided to stay in the parliamentary opposition, but they were unable to form the government, and what they call a political blockage, which I call the artificial blockage, remained.”

Al-Sadr had said about two months ago that he would turn to the opposition. He called on his political opponents in the coordinating framework that includes Shiite blocs, most notably the State of Law coalition, and the Al-Fateh bloc representing the pro-Iranian Popular Mobilization factions, to form the government.

The Sadrist movement, which heads the “Save the Homeland” alliance with the Sunni “Progress” bloc led by Parliament Speaker Muhammad al-Halbousi, and the Kurdistan Democratic Party, wants to form a majority government, stressing that its bloc is the largest in parliament (155 deputies).

As for the coordination framework (83 deputies), it pushes for the formation of a consensus government that includes all Shiite parties, as has been the political tradition in Iraq for years.

Because of the political dispute and the inability of any party to resolve matters, Parliament failed three times to elect a President of the Republic, exceeding the deadlines stipulated by the Constitution.

To overcome the political blockage, options were put forward, including the dissolution of Parliament and the organization of new elections, but Parliament can only be dissolved by a decision of the Parliament itself.