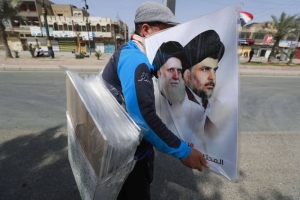 Today, Wednesday, the constitutional deadline for electing a president of the republic in Iraq expires, amid efforts by the coordination framework to market a political initiative to end the crisis, offset by negative treatment from the Sadrist movement, which is waiting for the framework to fail to use its legal and political weapons that it had previously waved.

BAGHDAD – The position of the Supreme Judicial Council in Iraq on forming an emergency government withdraws a card on which the tripartite alliance led by the Sadrist movement was betting, in the event that the efforts of the coordination framework fail to solve the dilemma of electing a president of the republic and forming a new government.

Iraq has suffered a stifling political crisis since the results of the legislative elections were announced about six months ago, and the country is only hours away from falling into a constitutional crisis, as the deadline for the election of a president for the republic expires today, while the parliament presidency did not initiate the call for its convening.

The election of a President of the Republic is a mandatory passage to form a new government, and by not holding a session on Wednesday, the country will fall into a constitutional vacuum, in the absence of a clear legal text on how to deal with this situation.

The head of the Supreme Judicial Council, Judge Faiq Zaidan, ruled out resorting to the option of forming an emergency government. Zeidan said that the current circumstances do not require the existence of such a government and its formation is unlikely.

Faiq Zaidan: The political consensus will resolve the crisis, not the dissolution of Parliament

He considered that the option of dissolving Parliament does not seem possible or available as well, adding, “We believe that political consensus will resolve the current crisis.”

Observers believe that the statements of the President of the Supreme Judicial Council, especially in relation to the absence of reasons for declaring an emergency government, mean that the Sadrist movement lost an important paper that it had previously waved in the face of its opponents in the coordination framework.

Observers pointed out that the leader of the movement, Muqtada al-Sadr, recently threw the ball into the court of the coordination framework to take the helm of the political process, after he and his two allies, the Sunni Sovereignty Coalition and the Kurdistan Democratic Party, failed to achieve any breakthrough and to attract the votes of the rest of the political forces and independents to its ranks.

Observers pointed out that Al-Sadr’s move was not innocent and stemmed from the abstention of the authority. Rather, it came in coordination with his two allies to turn the equation and put the coordination framework in a corner.

Observers considered that al-Sadr, who gave the framework forty days to elect a president of the country and form a government, was almost convinced that failure would fall to the latter, and then he would raise his political and legal weapons that he had previously alluded to, including an emergency government or the dissolution of parliament.

With the position of the Supreme Judicial Council on the emergency government, al-Sadr missed one of these weapons; The formation of this government presupposes, according to the constitutional text, the existence of force majeure conditions such as war or a major security challenge similar to what happened when ISIS invaded the country in 2014, and this does not apply to the current state of Iraq.

Observers say that the option of dissolving Parliament as well, as Faeq Zeidan stated, is not an option. This is due to several reasons, including that the coordination framework will not accept this approach, and its leaders – led by the leader of the State of Law coalition Nuri al-Maliki – expressed their rejection of this option, as al-Maliki said that “the dissolution of Parliament is not possible and we will not allow it.”

In view of the current situation, observers believe that the Sadrist movement should come down from its heights, and go in the path of searching for a consensual ground with the coordination framework and the rest of the political spectrum.

After the election of a President of the Republic is a mandatory passage to form a new government, and by not holding a session on Wednesday, the country will fall into a constitutional vacuum

On Tuesday, the coordination framework announced that it had handed over a political initiative to all blocs and parties, including the Sadrist movement. The leader in the framework, Ali Al-Fatlawi, said, in press statements, that “the coordinating framework during the past two days conducted an intense movement on all political forces, and handed these forces the framework initiative to end the political blockage, and the initiative was officially handed over to the Triple Alliance, including the Sadrist movement.”

Al-Fatlawi indicated that “there is a great interaction by some political forces regarding the framework initiative to end the crisis, and their support and support for it, and we are waiting for some parties to officially respond to the terms of the initiative.”

He expressed his belief that “the next few days will witness a breakthrough soon according to the framework initiative, which is now in the hands of all forces, including the Sadrist movement.”

The coordinating framework had put forward a few days ago a political initiative that he said would contribute to breaking the political blockage, but the leader of the Sadrist movement was quick to announce his rejection of the initiative without looking at its details, and later announced the transfer of the task of forming a government and choosing a president to the “blocking third” team, in reference to The framework, giving the latter a deadline that does not comply with the constitutional deadlines to address the crisis.