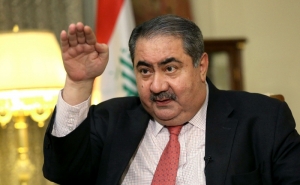 Baghdad – The Sadrist movement announced on Saturday the freezing of negotiations to form a government with the political blocs and a boycott of the Iraqi parliament session dedicated to choosing a president for the republic to succeed Barham Salih.
The Sadrists’ move comes amid a stifling political crisis in Iraq due to deep differences between Shiite forces over the formation of the next government.
On Saturday, the Presidents of the Republic, the Government and Parliament urged the winning political forces in the recent parliamentary elections to overcome their differences and move forward in forming the next government.
“We decided to freeze negotiations with the political blocs regarding the formation of the next government until further notice,” the head of the “Sadr bloc” in Parliament, Hassan al-Adari, said in a press conference.
He added that members of the Sadrist bloc should not attend the parliament session to choose the president of the republic scheduled for Monday, with the exception of the first deputy speaker of parliament, Hakim al-Zamili.
The Iraqi parliament is scheduled to hold a special session on Monday to elect a new president from among 25 candidates, most notably the Patriotic Union of Kurdistan (PUK) candidate President Saleh and the Kurdistan Democratic Party candidate Hoshyar Zebari.
The Sadrist bloc topped the October 10 elections, with 73 seats, followed by the Progress Alliance with 37, the State of Law coalition with 33, and the Kurdistan Democratic Party with 31.
The cleric Muqtada al-Sadr seeks to form a national majority government, unlike the rest of the Shiite forces within the “coordination framework”, which calls for a consensual government in which all political forces in Parliament participate, similar to previous sessions.
On Friday, al-Sadr called on his political alliance in parliament not to vote for Zebari if he did not meet the conditions.
Al-Sadr added in a tweet, “We are advocates of reform, not advocates of authority and rule,” days after Parliament scrutinized the resumes of candidates for the presidency and gave the green light to 25 candidates to compete for the position, including Zebari.
For his part, Zebari said in an interview broadcast on state television (Al-Iraqiya) on Friday that his candidacy for the post of President of the Republic “is definitive and we are going with it until the end.” He added that “the vote needs two-thirds of the members of Parliament, and we have a mobilization to get the sufficient number of votes.”
He also said, “Our insistence on the position of the President of the Republic is an electoral entitlement, not a national one, and the Patriotic Union of Kurdistan took its chance in the presidency for 17 continuous years.”
The National Union Party has maintained the position of president since 2006, while the Democratic Party’s share during the last period was one of the sovereign ministries, either finance or foreign affairs.
Al-Sadr has repeatedly expressed his willingness to enter into an alliance with the rest of the Shiite forces within the “coordinating framework”, with the exception of the leader of the “State of Law” coalition, Nuri al-Maliki, which is rejected by the “coordinating framework” forces.
Al-Sadr blames Al-Maliki, who headed the government for two consecutive terms (2006-2014), for “the rampant corruption and acts of violence” in the country, in addition to the ISIS invasion of a third of Iraq in the summer of 2014.