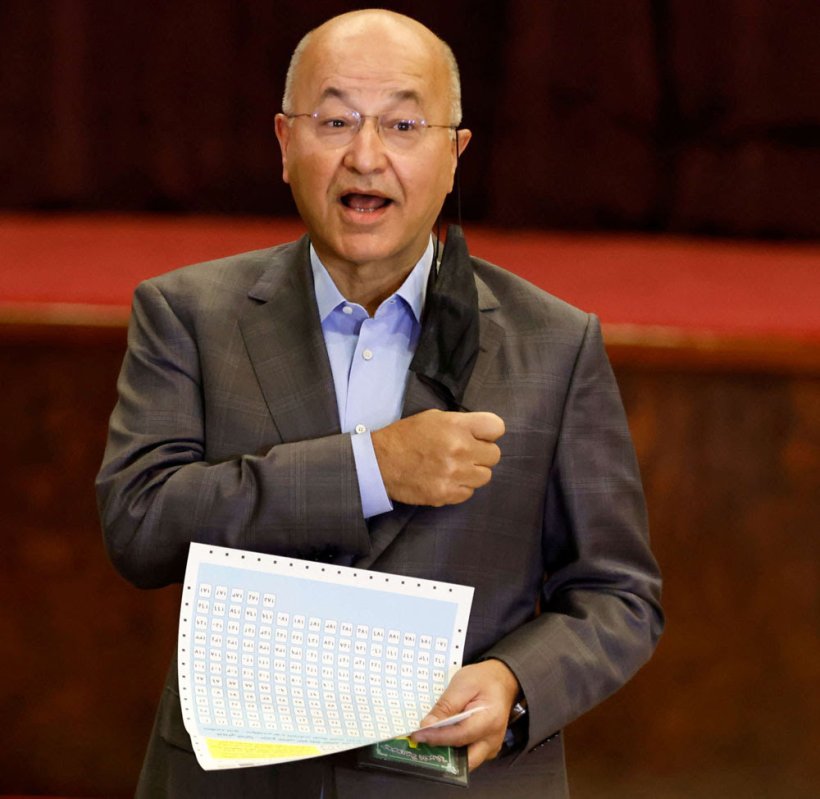 Iraqi political circles confirmed to “The Arabs” that a consensual formula is being arranged between the leader of the Sadrist movement, Muqtada al-Sadr, and Shiite parties affiliated with the coordination framework that depends on supporting the candidacy of the outgoing president, Barham Salih, for a new term in exchange for excluding the support of Hoshyar Zebari, the Kurdistan Democratic Party candidate for the presidency, who is known His relationship was tense with prominent Shiite figures who were behind the withdrawal of confidence from him in 2016 due to suspicions of corruption.

This comes in conjunction with calming efforts, most notably the initiative of Massoud Barzani, head of the Kurdistan Democratic Party, which aims – according to observers – to search for a ground of understanding between al-Sadr and his opponents from the Shiite house, and to expand the circle of consensus as much as possible to strengthen the chances of stability in the new government.

The Iraqi political circles said that the consensus on the candidate Barham Salih is an entry point for a broader consensus on the government, revealing that the coordinating framework is now dealing on the basis that the Nuri al-Maliki bloc, head of the State of Law coalition, is excluded from the government in all cases, in response to the veto that al-Sadr raises before Any coalition could include his archenemy al-Maliki.

She added that meetings between parties from the coordination framework and representatives of the leader of the Sadrist movement, during which it was reached that al-Sadr obtained the support of these parties on conditions, foremost of which was an agreement to cut off the road to Zebari’s candidacy and to expand this consensual formula and its content to include the various components supporting al-Sadr.

Parties from the coordinating framework offer support for the Sadr government on conditions, foremost of which is blocking the way for Zebari’s candidacy

And Iraqi MPs – including Kurdish MPs – whose opinions were surveyed by the “Arabs” considered that Barham Salih’s victory in the presidency is almost certain, especially since the vote will be secret, and the Kurdistan Democratic Party will not be able to know who voted against Zebari among its members.

Hundreds of supporters of the Coordinating Framework Forces demonstrated Monday in the Iraqi capital, rejecting Zebari’s candidacy for the post of President of the Republic. Eyewitnesses explained that the demonstrators raised banners, some of which read the slogan “We do not want advocates of secession” and others wrote the slogan “He who betrayed honesty does not suit him luxury,” in reference to Zebari’s support for the referendum on secession of the Kurdistan region from Iraq in 2017.

The same circles indicated that compensation was proposed to the Kurdistan Democratic Party in distributing ministerial portfolios in exchange for accepting the exclusion of its candidate, and that al-Sadr sought, during his meeting with a Sunni Kurdish delegation on Monday, to persuade this new consensual formula that preserves the gains of most of the parties supporting it on the one hand, and on the other hand, the circle of shrinking Forces opposing the government whose formation is being consulted, especially the candidate for its presidency.

The concerned Shiite parties say that the consensual formula with Al-Sadr regarding the support of Barham Salih can be added to the Barzani initiative to become a broader initiative capable of providing an atmosphere for comprehensive calm in Iraq.

Masoud Barzani said on Monday that “in order to solve problems and provide an appropriate and good environment for the political process in Iraq, a political initiative was put forward.” He added, “In the context of this initiative, I suggest that Nechirvan Barzani and Muhammad al-Halbousi visit Muqtada al-Sadr and consult on how to continue the political process and remove obstacles and problems.”

And he added, “I hope that this initiative will have positive results, and be in the interest of Iraq and all its components,” without giving further details.

On Monday, al-Sadr met the President of the Kurdistan Region, Nechirvan Barzani, and Parliament Speaker Muhammad al-Halbousi in the Najaf governorate in southern Iraq. No details of the meeting were revealed except for statements issued by the leader of the Sadrist movement declaring adherence to the formula of the national majority government.

In a tweet to him on Twitter after the meeting, Al-Sadr reiterated his adherence to the formation of a national government, welcoming the dialogue with what he called the national opposition, in reference to the representatives of the parties that accepted to be part of the political belt supporting the new government.

Iraqi observers believe that Al-Sadr will succeed through the consensual formula in penetrating the coordination framework, which is the political front of the militias allied to Iran, and that he will seek to persuade his allies in the Kurdistan Democratic Party of this formula that reduces the margin of Iranian maneuver aimed at controlling the next government and linking it to Tehran’s agenda, which he indicated. To him the Speaker of Parliament after the tripartite meeting with al-Sadr and Barzani.

Al-Halbousi said that a Kurdish-Sunni-Shiite movement began to form a purely national government, considering that “the time of foreign interventions in forming governments is over.”

He added, “Today, the mountains of Iraq (majority Kurdish areas) and deserts (majority Sunni areas) are moving to Najaf (the residence of the leader of the Sadrist movement, Muqtada al-Sadr) for the discussions of a purely national Iraqi government, neither eastern nor western,” which is the slogan that al-Sadr has long raised.

And last week, the commander of the “Quds Force” in the Iranian Revolutionary Guards, Ismail Qaani, visited Iraq, during which he met with Shiite political leaders, in an effort to bridge the views between the leader of the Sadrist movement and the leaders of the coordination framework.

On Monday, the Iraqi parliament announced the names of 25 candidates for the position of President of the Republic.

The General Secretariat of the Council said in a statement that “based on the provisions of Article (4) of the Law No. 8 of 2012 on the Provisions of Candidacy for the Post of President of the Republic, we announce the names of the candidates for the position,” including Hoshyar Zebari and Barham Salih.

Last week, the Patriotic Union criticized the Democratic Party’s abandonment of an agreement concluded between the two parties years ago, which stipulated that a candidate from the Patriotic Union assume the position of the presidency of the republic, with the Kurdistan Democratic Party taking one of the sovereign ministerial positions in the federal government (the Ministry of Foreign Affairs or the Ministry of Finance).

During its first session on January 9, the Iraqi parliament elected al-Halbousi to head the council for a second term after obtaining the confidence of 200 deputies, compared to only 14 votes for his rival, Mahmoud al-Mashhadani.

The Sadrist bloc topped the elections – which took place on the tenth of last October – with 73 seats (out of 329 seats in parliament), followed by the Progress Alliance (37), the State of Law coalition (33), then the Kurdistan Democratic Party (31)