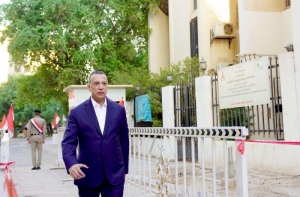 The recent moves of Iraqi Prime Minister Mustafa Al-Kazemi, his supervision of development and service projects, and his launching of an undeclared campaign against corruption and the corrupt, are not without, according to many, political calculations linked to his desire to seize a new government mandate.

BAGHDAD – Iraqi political circles say that Prime Minister Mustafa Al-Kazemi is on an open path to winning the premiership again, in light of the support he enjoys from the Sadrist movement.

And the political circles point out that the Shiite cleric Muqtada al-Sadr sees Al-Kazemi as the most capable figure to lead a “national majority” government that he seeks to form with the Sunni and Kurdish blocs, noting that the objections of the coordination framework that represents the forces loyal to Iran to Al-Kazemi do not pay attention to the Sadrists.

Al-Kazemi paid a visit to Najaf on Wednesday, while those close to him said that it was a continuation of a visit he made less than a week ago, and it is related to examining the reality of services in the governorate located southwest of the capital, Baghdad, which is the stronghold of the Sadrist movement.

Al-Kazemi chaired a meeting in the Najaf governorate building, which included a number of ministers, the governor of the Central Bank, leaders and directors of the service and security departments in the governorate.

During his previous visit to Najaf, which was interspersed with a hot meeting with Al-Sadr, Al-Kazemi took a set of decisions and measures related to the administration of the province, including personal supervision by him after the resignation of Governor Louay Al-Yasiri under pressure from the leader of the Sadrist movement. This resignation was met with the objections of the forces loyal to Iran, led by the State of Law coalition.

Al-Kazemi has recently been carrying out an active campaign to improve his image, by announcing a number of development projects, and launching a campaign of dismissals of governors and senior officials, around whom suspicions of corruption are raised, or some of them are involved in suppressing protests, as is the case with the governor of Dhi Qar.

Observers of the Iraqi affairs believe that the recent measures taken by Al-Kazemi, which are in the context of beating at the hands of the corrupt, are consistent with what the Sadrist movement and its leader have repeatedly announced that confronting corruption will be at the forefront of the reform project that he intends to implement after forming a national majority government.

A statement by the commission concerned with investigating corruption files in Iraq stated that “the judicial authorities concerned with integrity issued ninety-eight arrest warrants and summonses during December, as those orders were issued against eighty-five senior officials (some of whom were issued more than one arrest warrant on various charges), including a current minister. “.

The statement indicated that the orders were issued against the background of cases investigated by the Integrity Commission in Baghdad and other provinces, and referred to the judiciary. And he indicated that twenty-one arrest warrants and seventy-seven summonses were the outcome of the orders that included a current minister and former ministers, in addition to former parliamentarians, governors, and current and former directors-general, while the authority did not reveal the names of these people or the charges against them.

Iraq is among the most corrupt countries in the world, according to the Transparency International index over the past years.

And last October, Iraq held early legislative elections that came as a result of large-scale demonstrations in the country in October 2019 mainly calling for an end to the octopus of corruption.

The leader of the Sadrist movement focused in most of his appearances after his movement won the electoral merits on the priority of fighting corruption, considering that removing the corrupt is at the core of his reform program.

Observers believe that Al-Kazemi’s move in this file and at this particular time is a prelude to his assumption of the premiership in the next government, which has become clear that the Sadrist movement will form it despite the objections of the forces loyal to Iran.

Followers point out that Al-Kazemi, despite the meager number of achievements during his current term, does not deny that he is a figure who has proven ability to deal effectively with the ramifications of the political scene and has shown great pragmatism in dealing with external forces interfering in Iraqi affairs.

Observers say that there is no external veto on Al-Kazemi, even from Tehran, which does not find harm in re-assigning him as long as it does not pose a threat to its interests.

Observers point out that the only obstacle for Al-Kazemi is the position of the militias, but the latter does not have much to do if Al-Sadr insists on naming him and if he wins the support of the Sunni and Kurdish blocs.

Last Monday, Al-Kazemi visited the leader of the Al-Fateh Alliance Al-Hadi Al-Amiri in his office in Baghdad, while the purpose of this visit seemed to soften the atmosphere, and soften the position of the militias towards him.