Will Al-Sadr go with the option of naming Al-Kazemi despite the opposition of the pro-Iranian militias?

Will Al-Sadr go with the option of naming Al-Kazemi despite the opposition of the pro-Iranian militias? 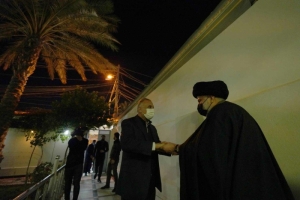 Iraqi Prime Minister Mustafa Al-Kazemi’s visit to Najaf and his warm reception by the leader of the Sadrist movement, Muqtada Al-Sadr, reinforced speculation that the Shiite cleric is heading to support Al-Kazemi’s candidacy for a new government term despite the reservations of the forces loyal to Iran.

BAGHDAD – The Sadrist movement has so far avoided putting forward any candidate for prime minister, but the leaks indicate that it is still supporting the renewal of Mustafa Al-Kazemi, despite the objections of the coordination framework that includes Shiite forces loyal to Iran.

On Thursday, the leader of the Sadrist movement, Muqtada al-Sadr, warmly received the Iraqi Prime Minister at his residence in Al-Hanana in the Najaf governorate. The meeting came on the impact of negotiations conducted by the Sadrist bloc with Iraqi political forces to agree on forming a new government.

The media office of the Prime Minister stated in a statement that Al-Kazemi and Al-Sadr discussed “the service reality of Najaf Governorate, and searched the best ways to raise the level of service and overcome all difficulties facing the process of providing services to citizens in the holy city of Najaf and the rest of the cities and governorates of Iraq.”

Al-Kazemi stated earlier that his visit to Najaf was “purely administrative, not of a political nature, but rather to see its conditions and help provide services to its people.” He added, “I came with a large ministerial team to make quick decisions; In order to solve problems, overcome challenges, and support the governorate with what it needs.”

And Iraqi political circles said that despite Al-Kazemi’s attempt to download this visit into a social dimension, it is not without political backgrounds, especially in terms of its timing, noting that Al-Sadr sees Al-Kazemi most able to lead a “national majority government” that he seeks to form.

The circles indicated that the desire of the leader of the Sadrist movement to renew Al-Kazemi’s mandate is due to many considerations, including the prime minister’s lack of affiliation with any political reference, in addition to his success during the last period in dealing pragmatically with the entanglements taking place on the Iraqi arena, although this does not negate some of the insinuations. that marred his performance.

And the circles pointed out that there are very close visions between Al-Sadr and Al-Kazemi, especially in files with a security dimension, as the prime minister adopts the exclusivity of arms in the hands of the state, and rejects the militia’s inflections, and this identifies with Al-Sadr’s reform program.

Al-Sadr’s desire to rename Al-Kazemi collides with the positions of significant political forces in Iraq, especially the militias loyal to Iran, which absolutely reject the renewal of the prime minister, as is the case with the rest of the presidencies.

The leader of the Sadrist movement, Muqtada al-Sadr, warmly receives the Iraqi Prime Minister at his residence in Al-Hanana, Najaf Governorate

The militias want a prime minister on the model of former Prime Minister Haider al-Abadi, and some of them are calling for the nomination of the head of the State of Law coalition, Nuri al-Maliki, to the position, and the two options are strongly rejected by the Sadrist movement.

Observers believe that it is not excluded that Al-Sadr will go ahead with the option of supporting Al-Kazemi’s candidacy, especially in the event that the Sunni and Kurdish forces participate in an alliance with him that qualifies him to form a majority government.

News emerged that Al-Sadr, during a meeting with leaders in the Al-Fateh coalition, put forward the political umbrella of the state militias in Najaf a few days ago, to go in the renewal of Al-Kazemi, but these leaders expressed strong reservations about that.

Observers point out that the issue of resolving the prime ministership is not currently a priority until the form of the next government is confirmed. Will it be a majority government as desired by al-Sadr, or a consensual government as the forces loyal to Iran are pushing for it?

Observers point to the continuation of the gap between the Shiite forces, as the Sadrist movement wants to be the maestro of the political process, and for some of these forces (Al-Fateh Alliance) to join a coalition that it forms within the framework of participation, not competition in the political decision, in translation of the results of the legislative elections it issues.

On the other hand, the Al-Fateh Alliance, which constitutes the political front of the state militias, wants a consensual government that includes all Shiite parties away from the logic of electoral victory.

Former MP Abbas Yaber said in a press statement on Friday that the birth of the next government will not be easy and quick due to the presence of what he called parties seeking to sow differences between Shiite blocs.

In contrast to the opinion that the government formation process can take a long time, others believe that the current developments in Iraq indicate the opposite, and that Al-Sadr has a comfortable precedence to achieve the goal of forming a majority government in light of the progress of negotiations between him and the Kurdish and Sunni forces that have recently succeeded in rearranging their ranks. And to bridge the differences between them.