“Hazm” currency backed by Iraqi personalities… Is it digital or a method of fraud?

“Hazm” currency backed by Iraqi personalities… Is it digital or a method of fraud? 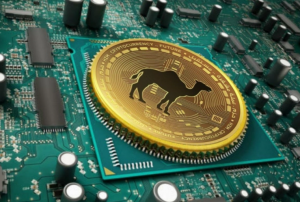 A few months ago, a digital currency was launched in Anbar Governorate, western Iraq, bearing the name “Hazm” and when it was announced, it was described as the first digital currency in the Arab world, and it was also announced that investing in it would generate great profits. But the value of “packages” quickly fell to one cent after it was estimated at 60 cents, which caused significant losses within a short period.

And Muhammad Al-Arab, the founder of the “Hazm” currency, is of Iraqi origin, and was born in the city of Fallujah, Anbar Governorate.

Warning
After the huge losses suffered by the buyers of “Hazm” last month, the Central Bank issued a warning against dealing with digital currencies, indicating that it does not guarantee such currencies and does not provide legal protection for those who deal in them.

The Central Bank said in a press statement that it is closely following the transactions in the digital, encrypted and virtual currency market, pointing to the great risks associated with these currencies and their lack of any legal, regulatory or technical controls or legislation in Iraq.

Aldobirdana Description “packages” Balhishh for its lack of marketing by the Arab grasslands (Al – Jazeera Net) , a
fragile
specialist in digital currencies Ivan Aldobirdana talking about currency “packages” as a digital currency intact , like other currencies token (token) that depend on the marketing strategy of pumping and discharge and any kind of tricks Many of the founders of cryptocurrency, specifically token makers, follow, noting that the Arabs were not qualified and did not succeed in marketing “packages.”

Al-Doberdani describes to Al-Jazeera Net “Hazm” as fragile, and that talking about comparing it with Bitcoin is naive, as comparing the strength of the US dollar and the collapsed Venezuelan bolivar currency.

He pointed out that the cost of extracting the cryptocurrency differs from one country to another, as it amounts to more than 3,000 dollars in China, nearly 5,000 dollars in the United States, and 26,000 in South Korea, and the extraction process requires large electrical power and computers with the highest specifications.

Victims
and victims of “Hazm” trader Zine El Abidine (pseudonym), who told Al Jazeera Net that his dealings with this currency exposed him to a great loss.

Zain al-Abidin says that the period of his circulation in the currency of “packets” was 30 days “when the price of one currency was 56 cents”, where he bought a number of them at 800,000 dinars (551 dollars).

The trader considered that “Hazm” is a scam because it is a token and not a coin, and it does not have any project, and it is considered a scam (a digital currency by illegal means), where the Arab owner transferred currencies from his wallet to another wallet, amounting to 600 million dollars, according to Zain Al-Abidin. .

A resident of the province (who refused to give his name) accused political figures from the province, without specifying them, of being behind “packages” with the aim of achieving gains on the residents’ shoulders “by providing a cover for illegitimate gain.”

He pointed out that many of Hazm’s victims were exposed to health crises and hysteria due to the loss of their money, after selling their cars or their wives’ gold holdings.

As for the promotion of this currency – according to one of the Anbaris – it was initially via communication sites to encourage its purchase, in addition to the fact that the Arabs published the names of people in Anbar with the names of civil society organizations under the pretext of helping the poor with food aid during the period before the last parliamentary elections to win their favor.
A trap
and a specialist in financial management, Dr. Ali Al-Nusaifi, says that “packages” are unofficial and are not legally subject to the Central Bank, and will be effective for monetary fraud.

He stressed to Al Jazeera Net the need for Iraqis to stop trading in digital currencies until a legislative and legal environment is available, where digital operations in cash are subject to the jurisdiction of the Central Bank and the Iraqi judiciary until they are protected.

Al-Nusaifi warned against falling into the trap of cash fraud, as happened in Turkey, which has strict laws in electronic trading, but could not prevent businessmen who took advantage of legal loopholes and were able to carry out fraud, and fled after collecting more than two billion dollars.